All the World's a Purple Knif 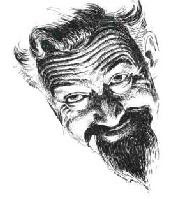 The Rondo Awards have grown by leaps and bounds since it began in 2002. The original ballot contained 14 categories - this year there are 27, almost double! Every year there are more voters as the word spreads about the Rondos - 1480 people voted last year, and founder David Colton said voting for this year is on pace to break that number once again.

The Monster Kid Hall of Fame was introduced in the Rondos second year, 2003. It is a special category established to honor those people who have helped keep classic horror alive through the years. The winners each receive a plaque with Rondo Hatton's image on it (once again a sculpted likeness of Rondo Hatton). There were 6 inductees in the first year, and a more worthy six could not have been honored. They were: Forrest J. Ackerman, James Warren, Zacherley, Vampira, and Bob and Kathy Burns.

This category is a write-in category. There were two horror hosts honored that first year (Zacherley and Vampira) and this year I propose there should be one other added to that list - Ernie Anderson, a.k.a. GHOULARDI. 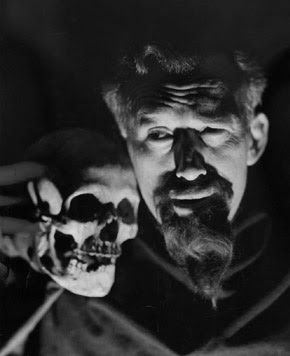 Ghoulardi began hosting horror movies in1963 in Cleveland, Ohio. His show quickly became so popular they added a second show on Saturday afternoons in addition to his Friday night show. It was a wacky, crazy show - Ghoulardi had a true beatnik sensibility about him. He referred to himself in third person, wore a fake van dyke beard, called people knif (fink spelled backwards), blew up things with boom booms (fireworks) in studio, and often wore crazy items on his head like hats, helmets, and even a faucet! Ernie was a former DJ, and the Ghoulardi show became famous for it's use of music during the show, the best known of which was "Papa Oom Mow Mow" by the Remingtons. His catch phrase was Stay Sick - Turn Blue!

I consider Ghoulardi one of the unholy trinity of horror hosts, alongside Zacherley and Vampira. His show was a major influence to thousands of viewers. I still meet people who remember watching Ghoulardi, even down here in Tennessee - Drew Carey recently gave a quick Ghoulardi history lesson on THE PRICE IS RIGHT when a contestant wore a Ghoulardi t-shirt to a taping. Ernie left the show in 1966 and moved to California where he became the official voice of ABC television.

After the Ghoulardi show ended it changed to the HOOLIHAN AND BIG CHUCK show, hosted by Bob Wells (Hoolihan) and Chuck Schodowski. Chuck had worked on the Ghoulardi show, and was a natural choice to host the show. Hoolihan later left and was replaced by John Rinaldi, and it became THE BIG CHUCK AND LITTLE JOHN SHOW. It was the longest running hosted movie program of all time. Big Chuck and Little John finally retired in 2007.

A second show spun directly off the Ghoulardi show as well - The Ghoul. Hosted by Ron Sweed, it began in 1971, also in Cleveland. Ron was a fan who won an appearance on the Ghoulardi show and became a gofer for the show. He also worked for a while on the Hoolihan and Big Chuck show. He received permission from Ernie to use the Ghoulardi character, (but not the name as it was copyrighted), so he became the Ghoul. He also wore the trademark lab coat, van dyke beard, and fright wig, as well as a pair of sunglasses with one lens missing.

Ernie Anderson passed away in February 1997 of cancer. The movie BOOGIE NIGHTS was dedicated to his memory, as well as a 1997 episode of THE DREW CAREY SHOW. His show is fondly remembered and there is even a Ghoulardi-fest convention in Ohio every year.

So my recommendation for Monster Kid Hall of Fame is Ernie "Ghoulardi" Anderson. His memory lives on in the hearts of viewers across the country. It's time the Rondos recognized him as well.