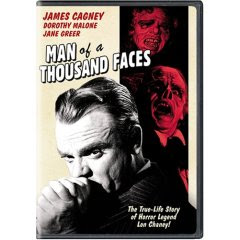 Universal is releasing the dvd Lon Chaney, Man of a Thousand faces later this month. It stars James Cagney playing the horror master. About time this one got a proper release.
at Saturday, June 14, 2008 No comments:

Here are the next 2 PSAs that we put together - they are slated to start airing this following Monday, the 16th!

Here's the press release New Valiant sent out about the PSAs:

Larry Underwood who portrays the Mad Scientist Dr Gangrene stated, "It's important that we take care of our city and our environment. Even little things can add up to a big difference if we all take part. The "Go Green with Dr. Gangrene" Campaign is our effort to help promote environmental and safety tips. If everyone works together we can have a safer, cleaner city for everyone to enjoy."

New Valiant Productions plan to premiere the series of newly completed shorts (produced by Michael Creason and directed by Cameron McCasland) on Creature Feature's home station WNAB Nashville CW 58 as well as on the web through their official web page www.newvaliant.com on the New Valiant Myspace page, www.myspace.com/newvaliant and Youtube channel www.youtubecom/newvaliantprod .

When asked about what brought this project together director Cameron McCasland stated, "This is our attempt to think globally and act locally. I think most people know they should be doing something to help make a cleaner planet, but have no clue where to start. As filmmakers, we wanted to provide information to viewers, while being entertaining. We tried to blend both the horror and comedy themes that Dr. Gangrene and Nurse Moan-Eek are known for while educating people on simple tasks that are good for the planet as a whole. The Creature Feature crew was responsive to our ideas for Going Green With Dr. Gangrene and it was a lot of fun using a zombie apocalypse as a metaphor for saving the planet."

The initial rollout includes three shorts titled "Bonehead" which tells the importance of safety belts. "Two Lane Trash Stop" that explains the dangers of highway litter. And "Trash Day Of The Dead" a tongue in cheek commentary on the evils of litter, set in downtown Nashville, TN. All three were produced locally in Nashville by Michael Creason, and directed by Cameron McCasland. They follow Dr. Gangrene (Larry Underwood) and Nurse Moan-Eek (portrayed by Linda Wylie) as they remind us to pick up our litter, as well as buckling up for safety. Later this month a new website www.gogreencrusade.com will launch with tips from the good doctor on how to stay safe and help protect the planet. And more short subjects will follow in coming months.

Producer Michael Creason had this to say about the classic cinema perspective spun with the new shorts. "With the ever growing emphasis on a global movement, we at New Valiant hope to do our part by capturing the attention of the people and families of middle Tennessee with a classic theme on a very contemporary concept. I think our Public Service Announcements relay the messages of safety and "Going Green" to a broad spectrum with some comedic relief. If people get the message and it sticks with them, then we have done our job. Everyone who worked on this project has a great sense of accomplishment and I am proud to be a part of it."

In a world where even Mad Scientist do their part to save the planet, we may have finally turned the corner for a better tomorrow for everyone. New Valiant Productions and Dr. Gangrene invites you to "Go Green With Dr. Gangrene" visit them on the web at: www.newvaliant.com www.drgangrene.com and the newly launched www.gogreencrusade.com

About Dr. Gangrene, Nurse Moan-Eek, and Creature Feature
Dr Gangrene, Physician of Fright, has haunted the scarewaves since 1999. Together with his faithful assistant Nurse Moan-Eek he continues to provide chills throughout Middle Tennessee. Creature Feature is set to broadcast new episodes in September of 2008 on WNAB CW 58 Nashville, TN. For more information visit www.drgangrene.com

About Cameron McCasland, and Michael Creason
McCasland and Creason are Nashville based filmmakers who work under the banner of New Valiant Productions. Their last collaboration "Fashionable: A Music Video For Quiet Company" won the "Best Music Video" category at both this years Crossroads Film Festival in Jackson, MS and Fearless Film Festival in Ft. Worth TX, as well as the "Silver Remi Award" at the Worldfest International Film Festival in Houston, TX.

New Valiant Productions is based in Nashville, TN and is owned and operated by Michael Creason & Cameron McCasland. For more information go to www.newvaliant.com
at Saturday, June 07, 2008 No comments:

We shot a series of PSAs a while back, and the folks at New Valiant have done a fine job putting these together. Here's the first of the psas now for your enjoyment:
at Friday, June 06, 2008 No comments: