The article I wrote for Scary Monsters Magazine #85, JACK PIERCE, FRANKENDESIGNER is now available as an ebook on Kindle. If you didn't get a copy of Scary Monsters and would like to read it, head on over to THIS LINK to grab a copy. 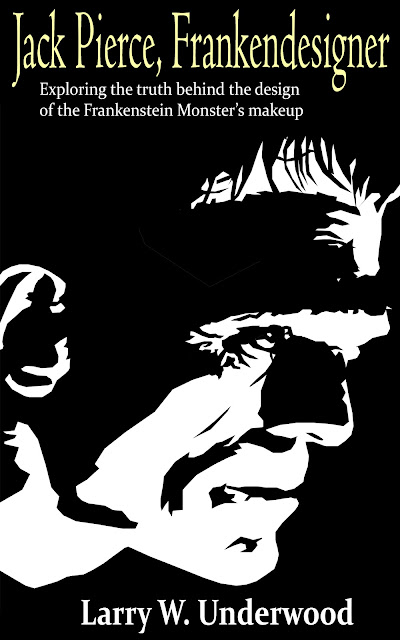 An exploration of the truth behind who is responsible for the design
of Universal Studio's Frankenstein Monster makeup.
at Thursday, March 28, 2013 No comments:

My son Luke and I went to the Horror Hound convention in Cincinnati this past weekend. I’d never been to Horror Hound before, so I was interested in checking it out. I contacted convention organizer Jason Hignite beforehand and he asked if I would speak at the Horror Host Hall of Fame induction ceremony. I of course agreed, and he told me the ceremony was planned for Saturday afternoon, which worked well for me, since I’d be arriving on Saturday morning..


We hit the road Friday afternoon after work and drove to my friend J Sorrells house where we stayed for the weekend. Sat morning we got up and drove to the convention, getting there around 10am. There was a huge line outside, which was just the first of many we’d encounter. I found out they were lined up to see Doug Bradley, so we made our way inside and quickly found Jason. He informed me that the Horror Host ceremony had been bumped up to 9am that morning, so I missed it! Jason apologized and said enjoy the show anyway, so we got wristbands and headed in.
Who were the guests there you ask? Doesn’t really matter, we couldn’t even get near them - they were all sequestered in a separate room with a hoard of people standing outside. AND, to make matters worse, you had to pass this room to get to the room where the panels were being held at the end of a hallway. We could not honestly make our way near that room either. Just too many people. So we said forget it, and just headed for the dealer’s room. (We were also told you had to have a VIP pass to get into the panels. Don’t know if that’s true, but I assumed it was. Very disappointing, as I was looking forward to a couple of these panels). 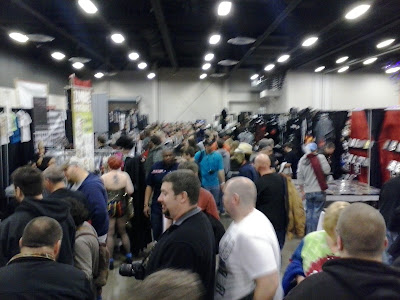 The dealer’s room was nice. Big room with tons of great booths and I caught up with a lot of friends of mine who had tables, which was good. One thing I really liked was the music piped into the dealer’s room – they played mostly music from the bands that were playing later in the evening (more on that in a bit). Good stuff. There were a handful of horror hosts at the show but they were separated from the rest of the dealer’s room in a side room, sort of an overflow room. Except for the Ghooligans, who were in the main room. Not sure why they had a table in the main room, but they’re one of the groups that had a panel, so maybe that was it. The Ghooligans are hosts that have elaborate makeups and are pretty visually striking. I’ve never seen their show but I hear good things about it. 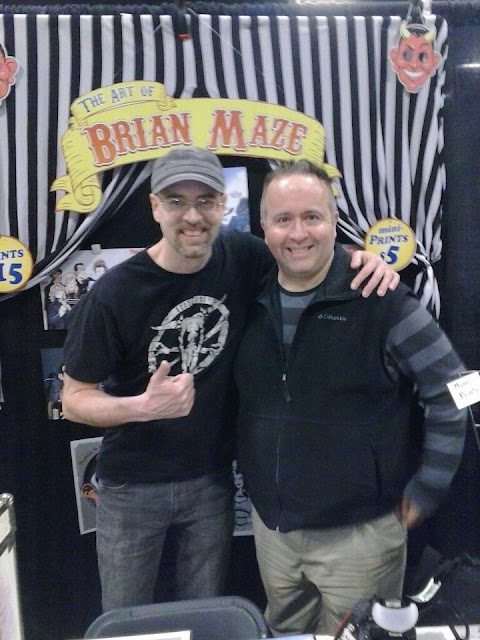 Count Gore DeVol was there celebrating his 40th anniversary as a horror host. 40 Years!! Quite an achievement! Another classic host was there also – Fritz the Night Owl. He looked great and was a funny and friendly guy. A. Ghastlee Ghoul was there, as was Halloween Jack, both friends of mine from way back. There were a half dozen or so other hosts there as well, newer hosts who all seemed to be enjoying themselves. I carried my labcoat in a backpack and planned to quick-change into character for the induction ceremony. Instead I only broke it out for a group shot with Gore and Halloween Jack. Otherwise I was really there to just enjoy the show. 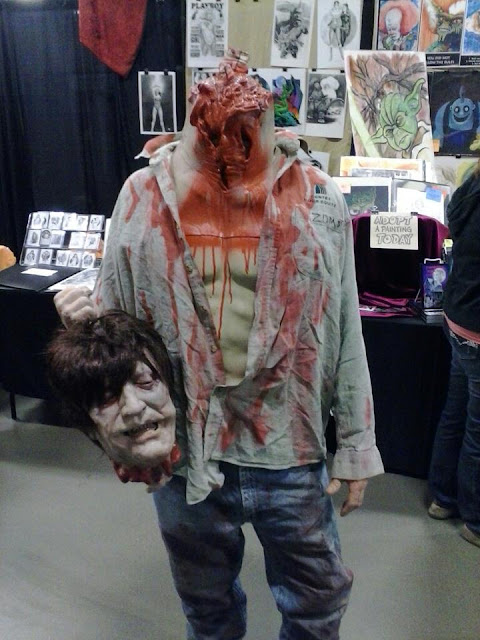 We roamed the dealer’s room, making a few purchases and talking with a lot of people. The original CHRISTINE car from the Stephen King movie was at the show, which was really cool. 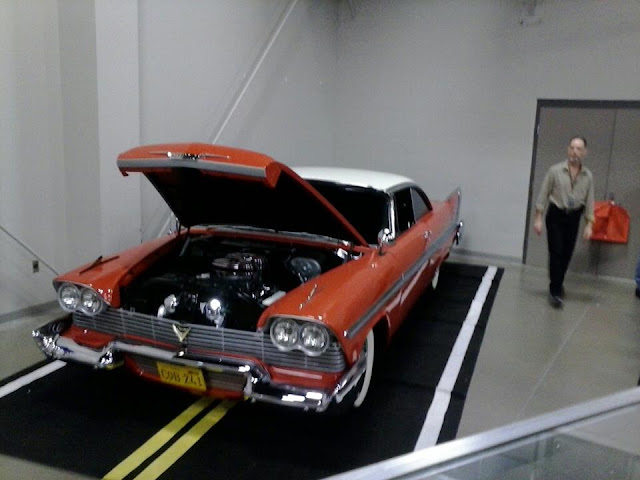 Around 5 we left for dinner. We walked to the hotel across the street but the service was so lousy we actually got up and left after being ignored at our table for over 10 minutes. We drove to a great barbecue place called Jim Dandy's just down the road, and have to admit this sign drew us in: 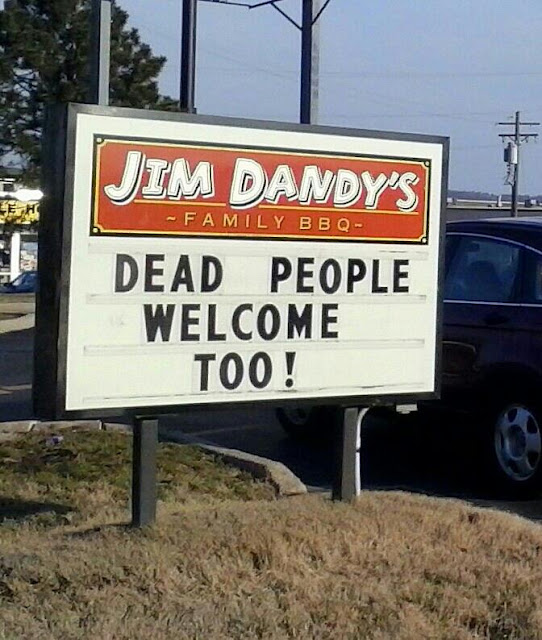 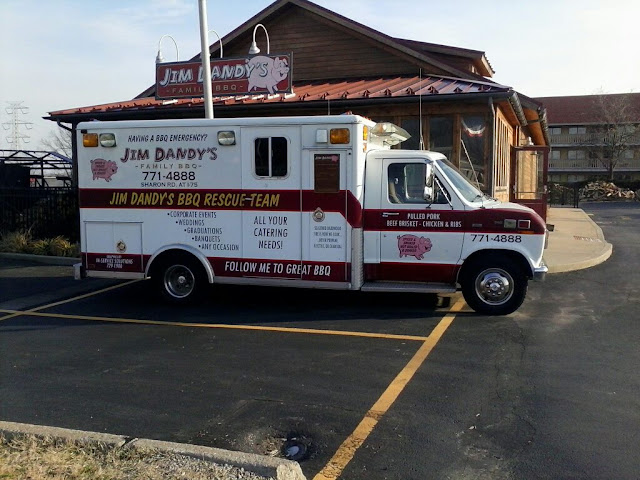 The food was great, btw, as was the service. Gotta love a bbq place that has their own catering ambulance! Afterwards I got directions to a nearby Starbucks. Caffeinated and full, all was happy again!


Back at the hotel it was time for the evening entertainment – bands!! This was the part of the show we were most interested in. They had 5 bands playing – THE BIG BAD, DEAD DICK HAMMER & THE TBA BAND, HARLEY POE, THE STELLAR CORPSES, & THE KOFFIN KATS. They were all really terrific. The lighting and sound was really top notch and the room was nice and big – unlike the convention there was plenty of room to accommodate the crowd. Afterwards I congratulated the sound guy on a terrific job. 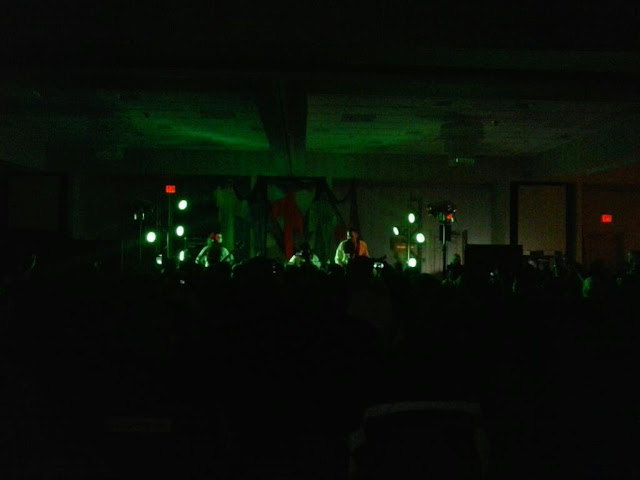 SO – my overall thoughts on Horror Hound are this… They need a bigger venue. A place with halls and rooms off it is NOT conducive to that size crowd. They need to rent a larger space or at least a different portion of the convention center, and arrange it so you DON’T have to wade through the autograph lines to get to the panels. KEEP bringing in great musical guests. I came up pretty much only because the Koffin Kats, Stellar Corpses and Dead Dick Hammer were playing. I mentioned this to Ken Daniels, organizer of the Fright Night Convention (who also had a booth there) and he got a chuckle out of that, but it’s true! My son had been dying to see the Koffin Kats for a couple of years, but since there are no real all-ages places in Nashville any more this was his first opportunity to see them. They are SO GOOD! Definitely keep the bands and night time activities – although the acts between bands went waaay too long. Need to speed up the between band activities. But the bands were a good time and something more conventions need to do.
at Monday, March 25, 2013 No comments: 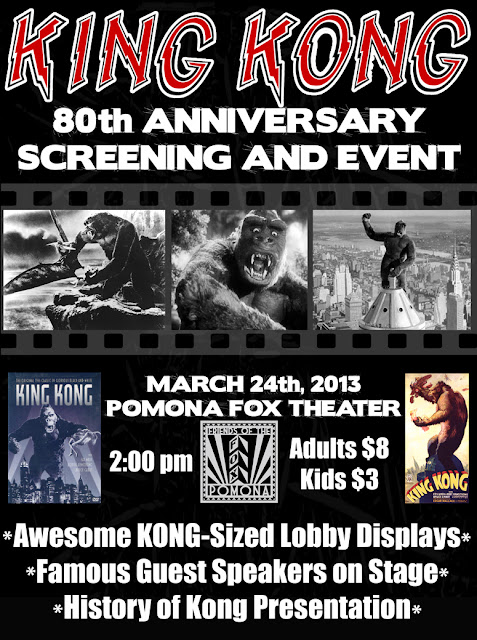 WHAT: Not‐for‐Profit Film Screening and Event

* Screening of Kong’s Many Appearances Throughout Popular Culture 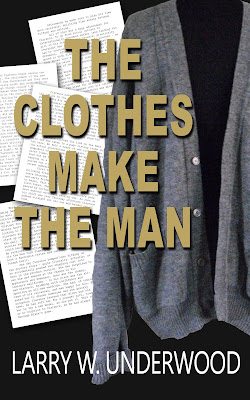 Continuing my Thirteen for 13 series of short stories, my March story is now available free on Amazon Kindle from today March 19 through Saturday, March 23rd.

If you like it please leave feedback there on the Kindle page. Thanks again for your support. This has been a fun project and creative outlet.