In this episode Dr. Gangrene takes a look at the 1943 film THE SONG OF BERNADETTE, where Price plays the part of Imperial Prosecutor Dutuor. A young village girl named Bernadette Soubirous sees a vision of the Virgin Mary in a grotto. Dutour is determined to prove Bernadette is a fraud by any and all means. This film is based on an actual historical event, where a young girl in France made the very same claims, which were backed up by the Catholic church and Bernadette is now considered a saint. Price is fantastic in this film, as the doubting non-believer. Worth watching for Price fans, despite the slow-pace and over-long run time. 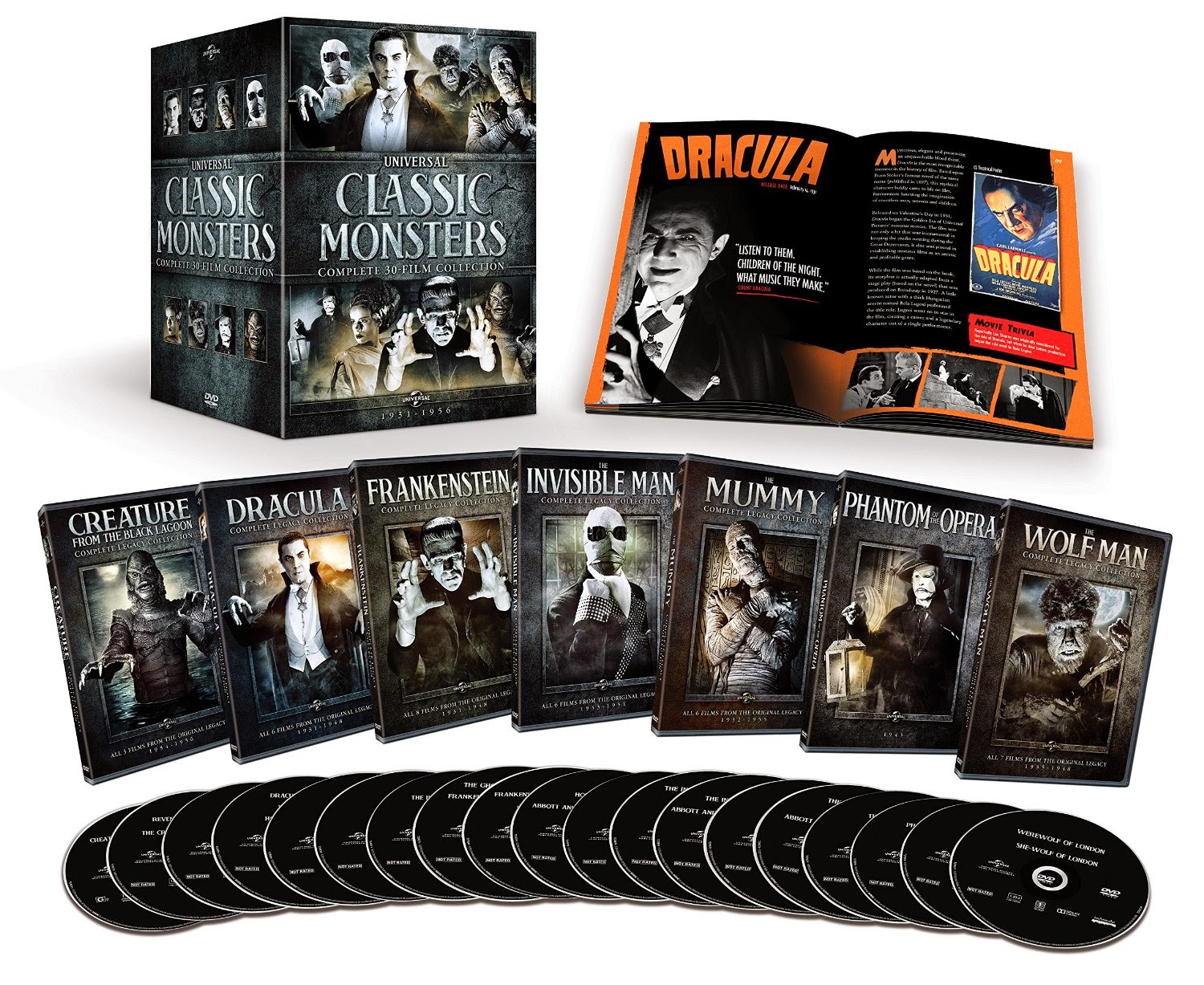 (Los Angeles, Calif. July 23, 2014) — They informed our dreams and nightmares, each and every one. Brilliant actors, craftspeople, and filmmakers combined to deliver these indelible characters who may have died on screen, but they will surely live forever. They are the one and only Universal Classic Monsters.
Now, for the first time ever, all 30 Universal Pictures' Classic Monster films will be available together on DVD in the "Universal Classic Monsters: Complete 30-Film Collection," available on September 2, 2014, showcasing every original film featuring Hollywood's most iconic monsters, including Dracula, Frankenstein, The Mummy, The Invisible Man, The Bride of Frankenstein, The Wolf Man, The Phantom of the Opera and The Creature from the Black Lagoon.
Everyone knows the names of the great actors who delivered the performances which made the films magnetic in unprecedented fashion: Karloff, Lugosi, Chaney, Jr., Rains, Hull, Lanchester, Rathbone, Carradine, Chapman. Their cinematic presence both individually and collectively stand tall in singular fashion through film history.

In this episode Dr. Gangrene takes a look at 2 of Vincent's films, both historically based - 1940's Brigham Young and 1941's Hudson's Bay.

Brigham Young features one of Vincent's most dramatic death scenes - check it out!

In this episode Dr. Gangrene takes a look at the 1940 jungle adventure film from director James Whale.

A jazz musician murders his girfriend in a jealous fit of rage, and learns to his dismay that he can't wash the blood off his hand no matter how hard he tries!

Email ThisBlogThis!Share to TwitterShare to FacebookShare to Pinterest
Labels: Dr. Gangrene, Dr. Gangrene Presents, One Step Beyond, the hand

In episode 4 of The Fantastic Films of Vincent Price Doc Gangrene takes a look at the 1940 film THE HOUSE OF SEVEN GABLES, a great little Gothic film from Universal Studios.

I've had some folks recently request that I post some of my older work online, so I thought I'd start with the 1940 poverty row chiller, THE DEVIL BAT, starring the one and only Bela Lugosi. In it Bela plays a mad scientist names Dr. Carruthers who creates a giant mutated bat that attacks and kills anyone wearing a specially formulated perfume he's concocted. I'm not making that up - it's a special after shave that causes the creature to KILL!

I made this episode a special bat-themed one, so we also visit the Nashville Zoo and take a look at their bat exhibit, learn about bats from their expert, show a music video called "I Wanna Dig Up Bela Lugosi" by the 3D Invisibles, and show a short vampire film from the Monster Kid Home Movies DVD that was shot by acclaimed director Robert Tinnell when he was still a kid.

All in all pretty fun stuff. This episode premiered on the Nashville's WB station, WNAB 58, broadcasting into all of Middle TN and Southern KY.

Enjoy! And be sure to let me know if you want to see more like this, and I'll continue to raid the vaults. 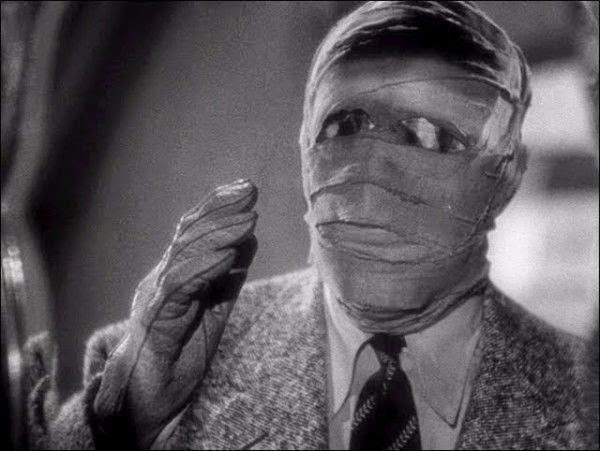 In this episode Dr. Gangrene takes a look at the 1940 Universal film, The Invisible Man Returns, in which Vincent plays the part of geoffrey Radcliffe, a man wrongly accused of murder. he is injected with invisibility formula by Professor Griffin's brother, and must clear his name!

Today is a bit of a milestone as this post is the 1000th of this blog. I started this blog October 26th, 2006. At that time I was actually restarting it, as I'd started a blog earlier that year and grown disenchanted with it and cancelled it. This was the second go-around, and this time it stuck.

Today is also an anniversary for me, as the premiere of my very first show, CHILLER CINEMA, made its debut on July 1, 1999! With that in mind, I'm feeling a bit nostalgic, so let's look back a bit at the past 15 years, shall we? 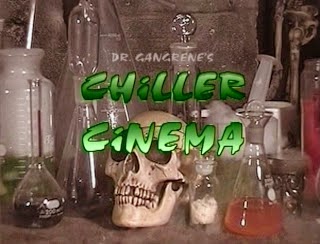 From there it was a snowball effect - other access stations began reaching out to us, asking for content, and we eventually moved the show onto our local UPN station and then switched again to the WB, where we enjoyed a long run.

I was always amazed at the success of the show - not that I didn't work hard. In fact, I worked my butt off, spending thousands of hours writing, shooting, and editing the show. But it always made me chuckle a bit that this little show filmed in a shed behind my house was garnering such heaps of praise.


And it did - we went on to appear in USA Today, on Spike TV, to be named of the 20 Best Cable Access shows in the country by GEAR Magazine, to win 2 Rondo Awards, to be interviewed multiple times in the Tennessean Newspaper, to appear in Scary Monsters, Rue Morgue, Mondo Cult, Outre, and Horror Hound Magazines - to win a Best of Nashville Award from The Nashville Scene Magazine and appear on the cover years later. 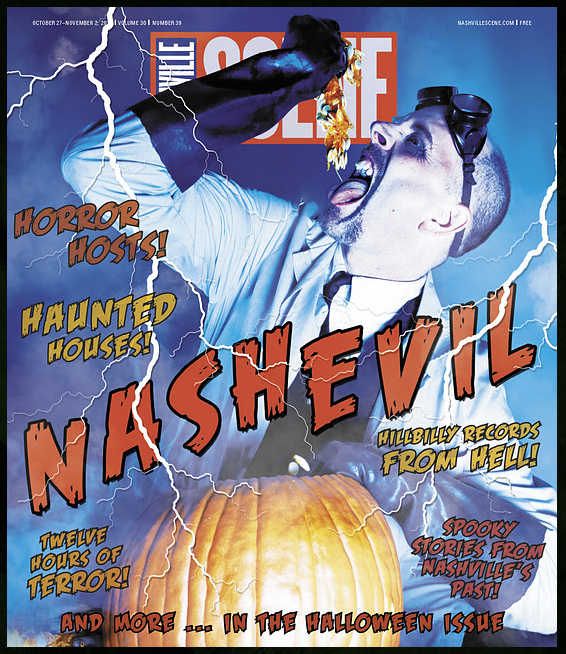 We even were given a special award from the Governor of Tennessee, an official proclamation recognizing Dr. Gangrene and company for years of hard work...


Just last year I was approached by a group of super talented folks who made a Dr. Gangrene comic book. I was honored to be asked to be the host of that book, it turned out amazing!

and even made an appearance in the official Dick Tracy comic strip! 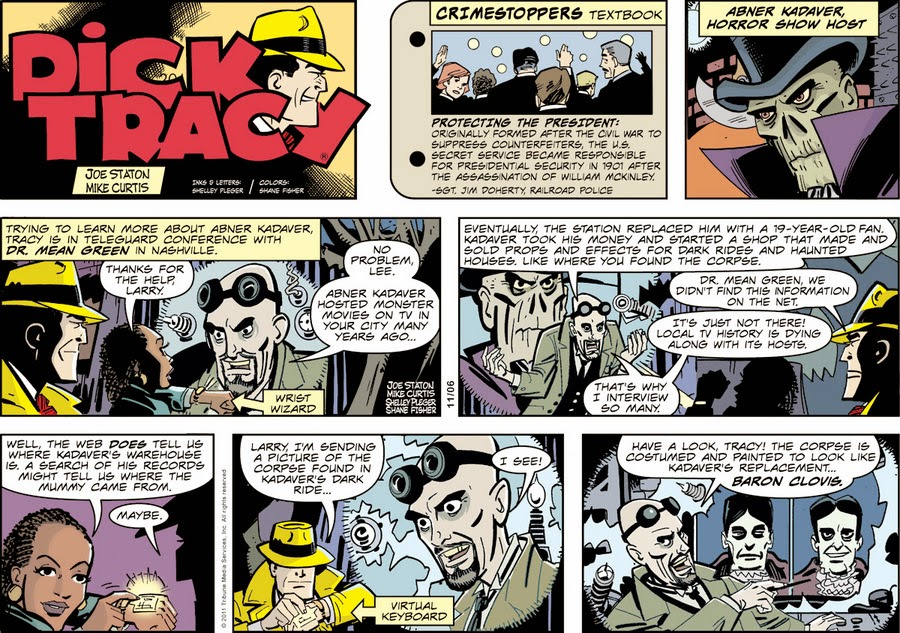 It's been an amazing run, and I've had the privilege of working with some talented folks over the years, especially Chuck Angell and Cameron McCasland, without whom the show wouldn't have been possible, and Jeano Roid who provided me with a welcome boost in a time of need, and became a great friend and frequent collaborator/partner on the Horror Hootenanny shows.

I also have to thank Mike Hook, Program Director at WNAB for the opportunity to host movies on the WB - Ken Beck from the Tennessean for all the great coverage over the years - Jim Ridley at the Nashville Scene - Dan Johnson for all the writing talent - Brian Hickman for technical assistance, camera work, and musical genius - Keith Smith for the editing expertise - Steve Kaplan at Alpha Video - Dave Conover and the folks at Wonderfest - Ron Adams and the folks at Monster Bash - Dennis Druktennis at Scary Monsters Magazine - Scott Essman at Universal - Mike Curtis for the opportunity to appear in Dic Tracy, an amazing event I never could have forseen - Sam Thompson for the encouragement and technical assistance starting out - Trish Crist and the Nashville Cable Access Station - J. Sorrels, my drive-in partner in crime, for all the help on the live shows and being such a great friend - Derek Koch, who has been a true friend in times of need - Robert Taylor and Sara Waugh, my fellow Vincent Price fanatics - my horror host brothers in arms - all the many talented musicians who donated music and videos for the shows, especially The Creeping Cruds, The Exotic Ones, The Reverbians, Impaler, Ben Kaboom, Ghoultown, The 3D Invisibles - Jason and Stephanie Carmen - Mark Greenbaum for the help on the show and with Spookhand - Joe Badon for putting together the Dr. Gangrene Comic Book! - Bob Horne, for crafting the awesome Mego figures - all the talented artists and animators who donated work - the many cast and crew members who helped over the years, you all have contributed to the success of the show and I thank you all, Brandon Lunday, Linda Wylie, Ethen Black, and Paul Browning especially, as you all put in many late hours.

To all the interviewees and guests, and indy filmmakers we've featured, my thanks! You guys were all amazing, and it's been a treat to host this show the past 15 years. Over that time I've had my ups and downs, personally, and the show has reflected that. But through it all my friends supported me, and the show continues.

I know I am leaving off many deserving folks, as there are too many to thank, it's impossible to name them all. If I didn't mention you, just know I appreciate your support.

Thank you all - Here's to the future, whatever it may hold.
Stay Mad - Dr. Gangrene