I kicked off a new series on Youtube this week I'm calling Dr. Gangrene's Movie Night, where I'll pick a movie at random off my shelf and watch it and review it. For the first episode I looked at a pretty neat little indy flick from 1990 called METAMORPHOSIS... have you seen this one?

One thing I quickly discovered while doing this year's Halloween countdown of mad science movies for Youtube is just how many of them there are! Of course I knew there were a lot going into the countdown but once I started looking specifically at the genre the full extent hit me. Even with the specific criteria that I applied to this countdown - it had to feature not just a mad scientist but also a creation of some sort that runs amuck (thus the title Monsters Gone Wild) - there were way more of these films than I could possibly cover in 31 days (especially in the early days of cinema) . 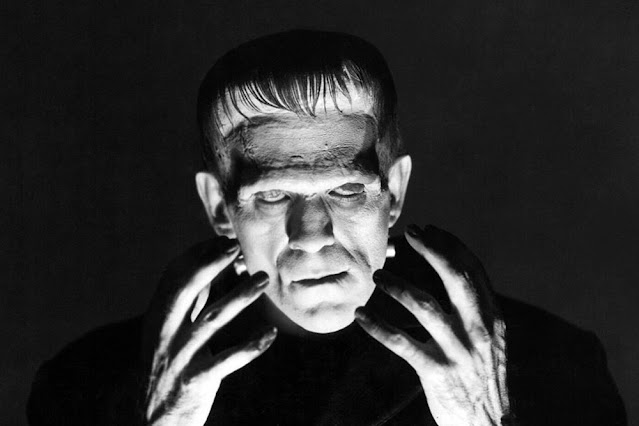 But of all the hundreds or possibly thousands of mad science movies out there, one stands boots and bolts above the rest - I'm talking about, of course, the 1931 Frankenstein from Universal Studios.

Most of us are familiar with the story - Colin Clive plays Dr. Henry Frankenstein, a scientist obsessed with creating life. Together with his hunchback assistant Fritz (Dwight Frye) he robs graves for parts to sew together to create a new body. He builds a laboratory in an abandoned windmill and makes all the preparations. During a thundering storm he harnesses electricity from lightning and brings his creation to life. The monster (Boris Karloff) is grotesque, huge, and strong, yet innocent of mind. When Fritz tortures the monster with a whip and open flames , it reacts in fear and murders Fritz. The horror of what he has done overcomes Frankenstein, and he realizes the monster must be destroyed. His mentor Dr. Waldman (Edward Van Sloan) prepares to dissect the creature to destroy it forever, but it awakens and murders the doctor, then escapes to rampage the countryside. 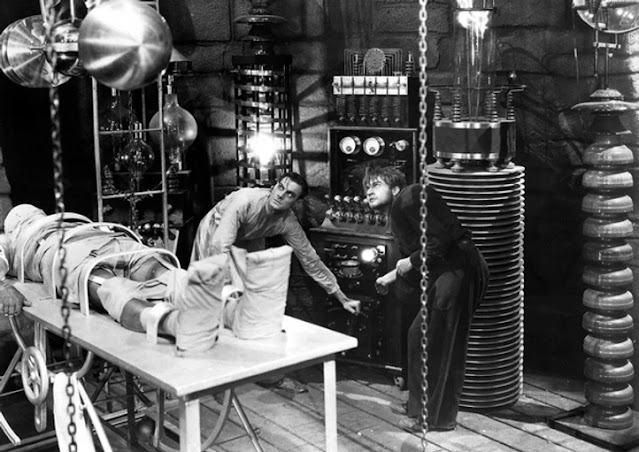 This film is loosely based on the 1818 Mary Shelly novel Frankenstein or the Modern Prometheus. It draws influences from the 1927 stage play adaptation of that novel by Peggy Webling too, as well as an American adaptation of that play by John Balderston. It's always been interesting to me that Universal chose to swap names of the doctor and his best friend, Henry and Victor. In the book the doctor is Victor Frankenstein and his friend Henry Clerval. This name swap came directly from the first stage adaptation of the Mary Shelley novel, adapted by Peggy Webling.

When I think of Frankenstein the image of Boris Karloff in that incredible makeup immediately springs to mind.  The look of the monster is so iconic it is etched into the public consciousness. It’s a part of the general zeitgeist now. That design was painstakingly created by makeup artist Jack Pierce through weeks of trial and error with Karloff, testing and reworking designs until they came up with the final look that wowed audiences and continues to impress to this very day, nearly 100 years later. 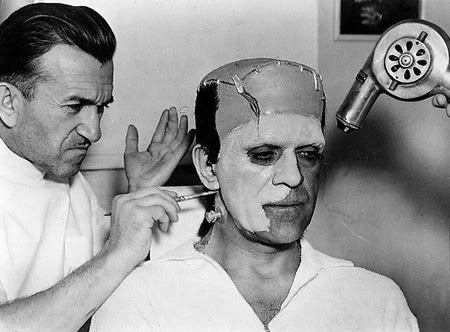 It was Karloff’s performance that sold that design wholeheartedly, however. Without speaking a single word he conveyed power, pain, rage, and even vulnerability. Colin Clive is convincing as the obsessed scientist who immediately regrets his ill-fated actions in creating this monstrosity. Mae Clark plays the doctor's fiance Elizabeth. James Whale's direction is masterful. Dwight Frye is the actor who continues to impress me on repeat viewings of this film. He is just so GOOD in it. Fritz is a sad being who was undoubtedly mocked and abused by society and who, given the opportunity, does the same thing to someone else, torturing and tormenting the monster with whips and open flames.

Kenneth Strickfadden’s electrical apparatuses in the lab would not only be copied in films going forward, many of the actual devices would be used and repurposed in other mad science movies for decades. 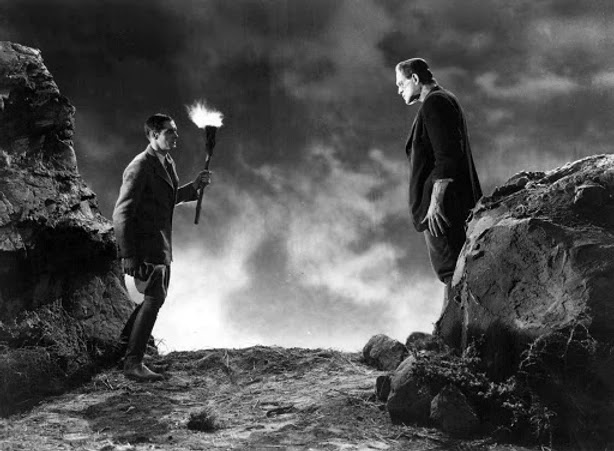 This film is, in a word, iconic. It set the mold for so many films – not just Frankenstein movies, mind you, but mad science films in general – to come for decades. Thundering storms, the musty damp castle, buzzing electrical apparatus, a bubbling beaker-filled lab, the hunchback assistant, the obsessed scientist tempting the laws of nature – the list goes on and on.

This was quite possibly the first horror film I ever saw, on television as a kid in the early 70s. It doesn’t get much better than this.

Dr. Gangrene wraps up the 2021 Halloween countdown with a look at the Reanimator franchise. Happy Halloween everyone, and thanks for watching these along with us!

Dr. Gangrene's Halloween countdown continues with a look at The Bloodwaters of Dr. Z... aka ZAAT

Dr. Gangrene keeps the 2021 Halloween Countdown going with a look at the Mexican schlocker, Night of the Bloody Apes.
at Friday, October 29, 2021 No comments:

Dr. Gangrene keeps the Halloween countdown going with a look at the absolute classic of the genre, Island of Lost Souls (1932).

For Day 27 of the Halloween countdown we take a look at the 1943 Universal film Captive Wild Woman.

I've been watching a ton of films featuring mad scientists lately, as that was my theme for this year's Halloween countdown on YouTube. Mad scientists were all the rage in the early days of science fiction films. There are more mad scientist pictures throughout the 30s and early 40s than you can shake a test tube at. Universal Studios released their own fair share of them during this time, most notably the Frankenstein series of films, as well as other mad science features like The Invisible Ray and Man Made Monster. In 1941 Universal also released a very different type of monster movie that would become a smash hit... The Wolf Man, starring Lon Chaney Jr. The movie in this week's review is from a rival studio, one of the lesser ones... PRC... and it was their own low-budget attempt to capitalize on both of these genres - mad science and werewolves - mashed into one picture, with THE MAD MONSTER. 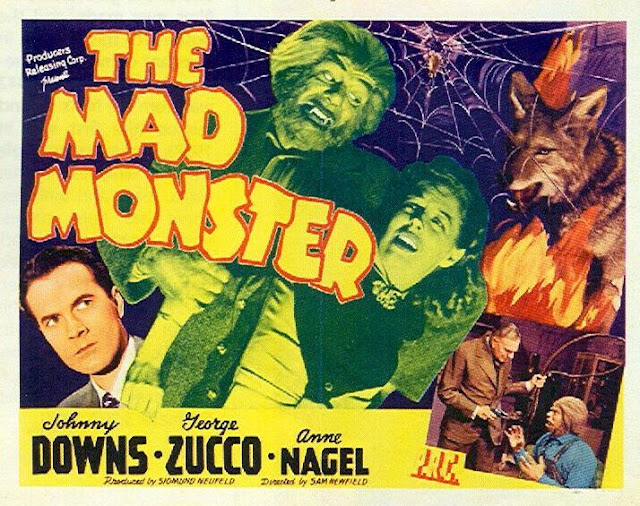 George Zucco stars as Dr. Lorenzo Cameron, a scientist with a chip on his shoulder towards a group of colleagues and fellow scientists who scoffed at his work, called him mad, had him barred from the University where he was employed, and discredited him in the press.
He was working on controversial theories of science and evolution at the time and has since continued these studies, using his simple-minded handyman Petro (Glenn Strange) as a test subject. He gives Petro injections of a catalytic agent derived from wolf blood that turns him into a snarling werewolf. He then invites each of his nemesis to his lab for a firsthand – and deadly – look at his “mad” theories in practice. Petro has no recollections of his transformations afterward, or the monstrous deeds he performs while in his animalistic state.
Anne Nagel plays the good doctor's daughter, Lenora, oblivious to his work and mad scheme. Johnny Downs plays her boyfriend reporter who suspects her father’s involvement in the unusual string of deaths of scientists. 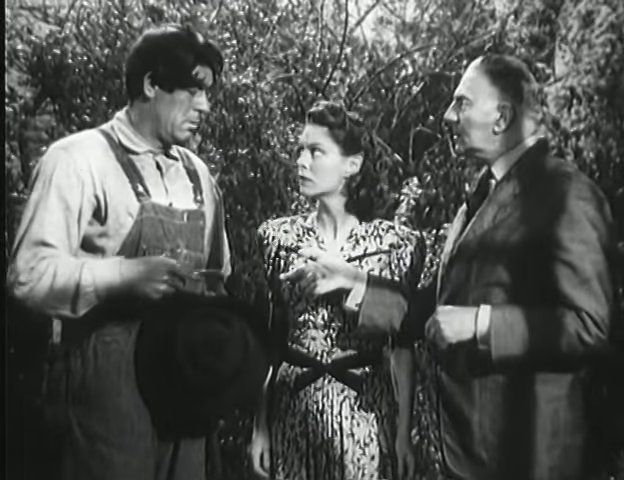 The Mad Monster was directed by Sam Neufeld in 1942 for PRC (Producer's Releasing Corporation). This black and white poverty row chiller feels very low-budget across the board, and a bit dated, mostly due to the clunky soundtrack, which is very much a product of its time. Despite this, the film is fairly entertaining throughout, mostly due to the quick runtime (77 minutes) - but it could still stand to have 5-10 minutes cut just to tighten it up a bit.
The makeup for the werewolf in this one consists mainly of wig, beard, and fangs – but it's still effective, and his costume is unique, resembling a hillbilly werewolf in overalls and floppy work hat. Glenn Strange’s size makes him an imposing, hulking brute of a beast – which of course made him perfect to play the Frankenstein Monster two years later, in 1944’s House of Frankenstein. 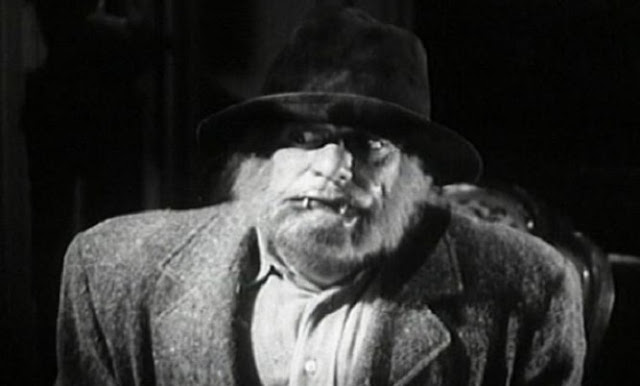 The Mad Monster is very similar to another mad science film that came out one year prior (1941) - Man Made Monster. In both a somewhat slow, simple man is taken advantage of by a mad scientist, used as a guinea pig, and turned into a monster with the ultimate goal of creating an army of super-powered soldiers. Anne Nagel stared in both films as the daughter of a scientist and has a reporter boyfriend in each as well.
This film also plays very much like a mash-up of two Lon Chaney Jr. films: the aforementioned Man Made Monster and The Wolf Man, which was also released in 1941. To top it all off Glenn Strange seems to be very much channeling Chaney’s performance as Lennie from Of Mice and Men (1939) in this role as well. There's no doubt in my mind one of the producers of this film was a Chaney fan! 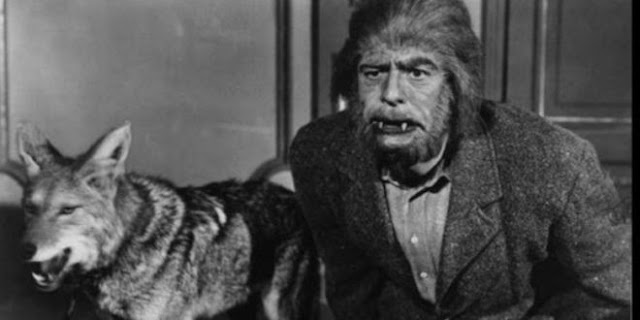 Director Sam Newfeld would go on to direct four films starring good ole George Zucco, all science fiction schlockers from PRC - The Mad Monster (1942), Dead Men Walk (1943), The Black Raven (1943), and The Flying Serpent (1946). George Zucco was definitely their "guy" there at PRC.
Speaking of Zucco, the role of a mad scientist seems custom-made for him. He brings an intensity to his performance that is perfect for the part. The sets and backgrounds in this one feature the standard mad science trappings of bubbling beakers and fluid-filled flasks, housed within the castle-like stone walls of his laboratory. What kind of mad doctor would he be otherwise?
The Mad Monster was re-released in theaters in 1945 on a double-bill with The Devil Bat starring Bela Lugosi. These films pair perfectly as each features a mad scientist taking revenge on their former colleagues through elaborate mad schemes. That would have been a great double-feature, especially in drive-in theaters - hell, I'd love to see that double-feature at a drive-in even today!
3 out of 5 skulls

Keeping that 2021 Halloween countdown going with a look at THE CREATURE WITH THE ATOM BRAIN.

Dr. Gangrene keeps the 2021 Halloween countdown going with a look at The Thing with Two Heads.

Dr. Gangrene keeps the Halloween countdown going with a look at the scifi classic The Colossus of New York