I wanted to introduce you viewers to an artist named Bradley Beard, who is doing something pretty neat - a drawing a day, posted on Facebook. He began his series on October 1st, 2014, doing character portraits from Horror and Sci-fi movies... 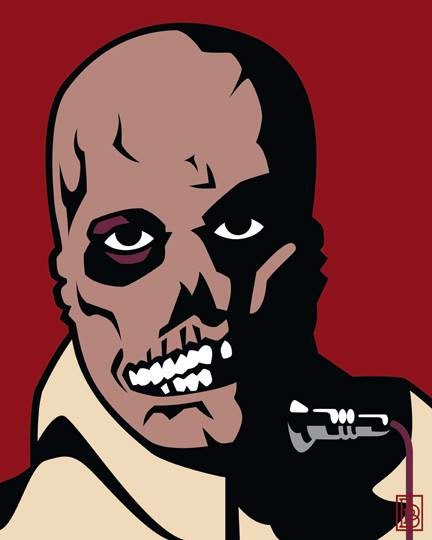 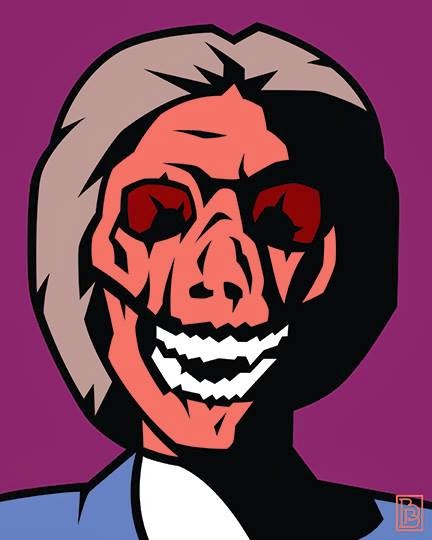 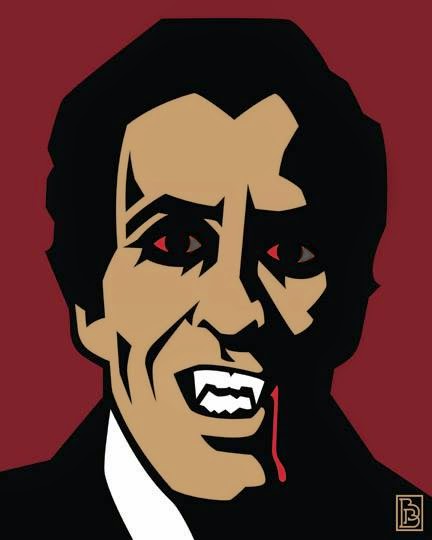 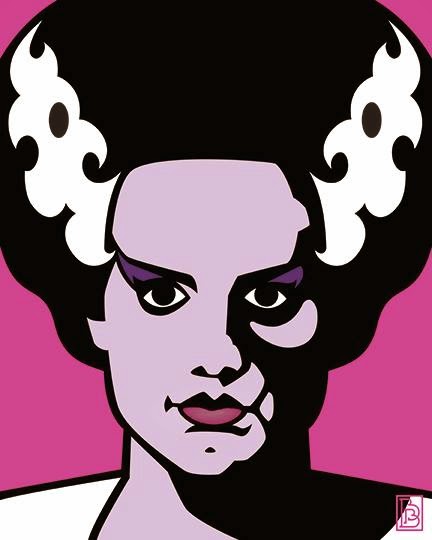 Originally scheduled as a 30-Day challenge, he decided to continue the experiment, and eventually switched the focus of his series to featuring horror hosts each day, with spectacular results... 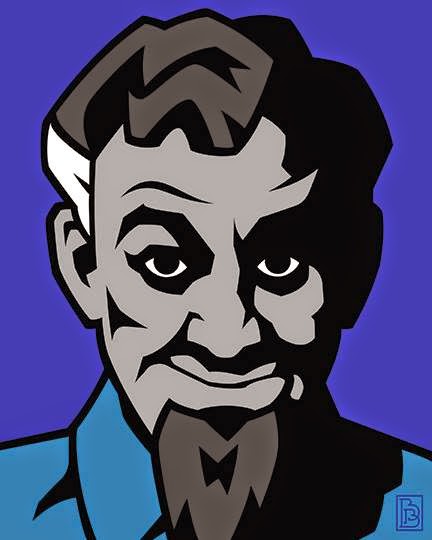 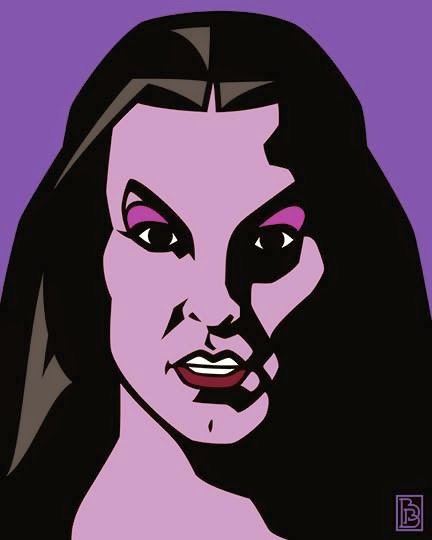 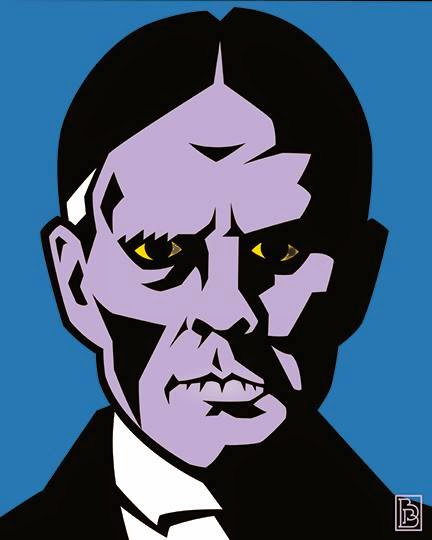 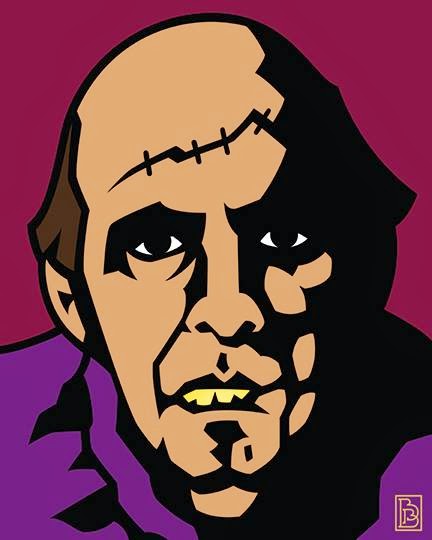 I was honored to be his most recent test subject, for day 113 of his art challenge. Thanks so much, Bradley - these are fantastic!! Keep up the great work! 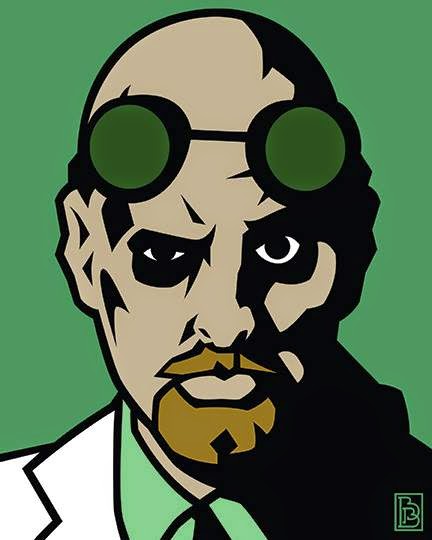 Stop by Bradley's Facebook page and check out all his work, and be sure to tell him Dr. Gangrene sent ya!! https://www.facebook.com/bb2design

Dr. Gangrene inducted into the Horror Host Hall of Fame

It is my great pleasure to announce that yours ghouly has been inducted into the HORROR HOST HALL OF FAME. 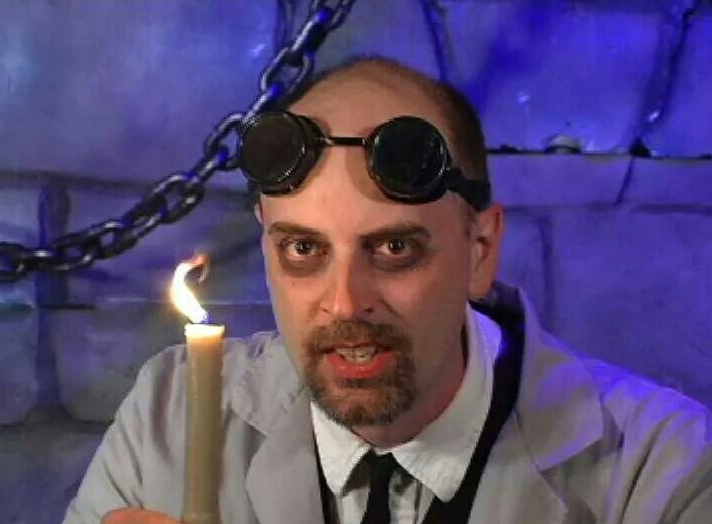 This year was the first that they added a new category, New school ghoul, and I'm honored to win. thanks so much to everyone who voted for me. 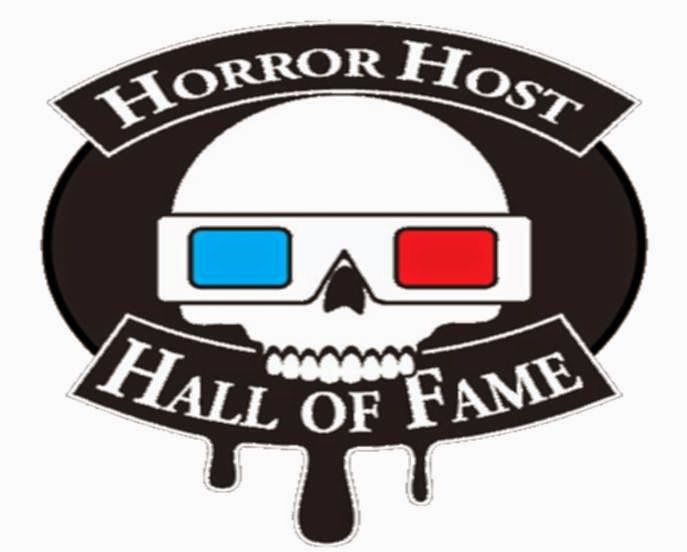 This is also doubly-sweet because this year the host I grew up watching, Sir Cecil Creape, is also being inducted, so I'll be giving the speech for HIS induction while I'm there, too! 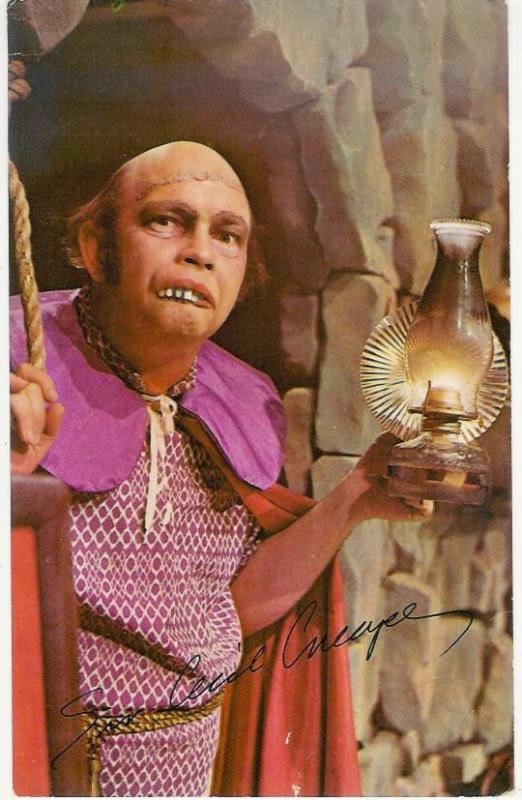 Behind the Screams:
American Scary
The Horror Host Underground
at Friday, January 16, 2015 8 comments:

Greetings Fright Fans! Recently it was my pleasure to make the acquaintance of artist and monster movie lover extraordinaire Jeff Carlson. He has been doing a series of monster-themed merchandise based on the old 70s Mani Yack style designs, and they’re really awesome. I thought I’d invite him into the lab here for a chat… 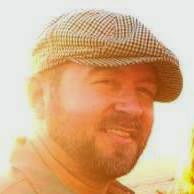 Dr. Gangrene - Hi Jeff, thanks for joining me here on Shackle Island for this interview. Hope the zombies in the graveyard didn't give you too much trouble...

Jeff - Zombies are driven by a craving for brains, right? Then I've got nothing to worry about.

Doc G - So tell me about Mani Yack artwork. I understand it is something that originated in the 60s, classic iron-on decals and monster designs, if I'm not mistaken? Where did the name Mani-Yack come from?

Jeff - Honestly, there's not a lot to be said about the origins of the vintage "Mani-Yack" stuff. The old company was based on the East Coast and put out a lot of these iron-on transfer designs . . . mostly sports related stuff. They only did six Universal monster ones.

Many years ago, I had a set of the original transfers. I used to be a big collector. Anyway, the vintage pieces were too valuable to actually put on a shirt but, being in the graphic design business, I had them professionally scanned and offered them as new heat transfers. 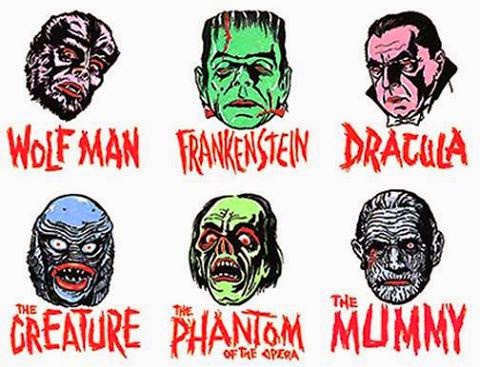 Jeff - People went crazy for them. I couldn't keep them in stock. At about the same time, several people mentioned how cool it would have been if they'd originally done more monster designs besides just the first. Being a commercial illustrator by profession, I took the idea and ran with it. The first new "tribute" designs I did were of Dr. Phibes and Vincent Price. The rest, as they say, is history. Now my library of new "Mani-Yack" monster images is over 40! 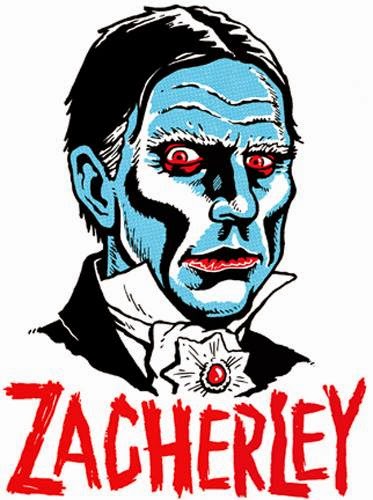 Doc G – That’s fantastic – I noticed you have a Zacherley one – are you a big horror host fan, and did you have one in your area growing up?

Jeff - Yes, I've been a life-long fan of horror-hosted movies. I grew up in Central Illinois in the 1970's . . . where we were treated to several different programs, Svengoolie being the best one. 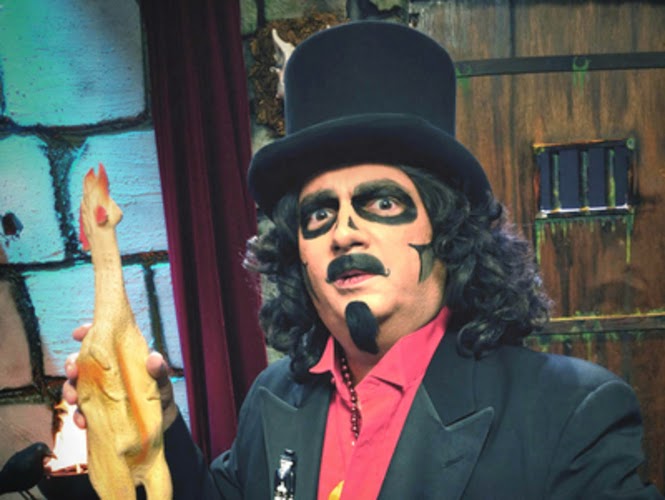 Doc G - You talking the original Sven, Jerry G. Bishop, or Son of (later to become just Svengoolie) Rich Coz? Both really are top notch, honestly.

Jeff - Jerry G. was before my time. Many years later, I'd have the pleasure of meeting Rich (Svengoolie) Koz. For a while, I was the unofficial cartoonist for a Yahoo group dedicated to the him! I still occasionally submit drawings to his FB page. It's great to see him nationally syndicated now.
We had a couple other "Creature Feature" types shows . . . . the only one worth mentioning would be the Chuck Acri hosted one. He didn't dress up or anything but he did run pre-recorded monster skits by some other characters.


Doc G - Tell me about your art background. What were some of your early influences?

Jeff - Early influence . . . comics. Specifically, the early Swamp Thing and the work of Berni Wrightson. TV shows like Kolchak and Night Gallery made a huge impact on me as well. So much great stuff growing up in the 1970's! I also do some prop making. Quite proud of my "Medallion of Dracula" and "Amulet of Kharis". 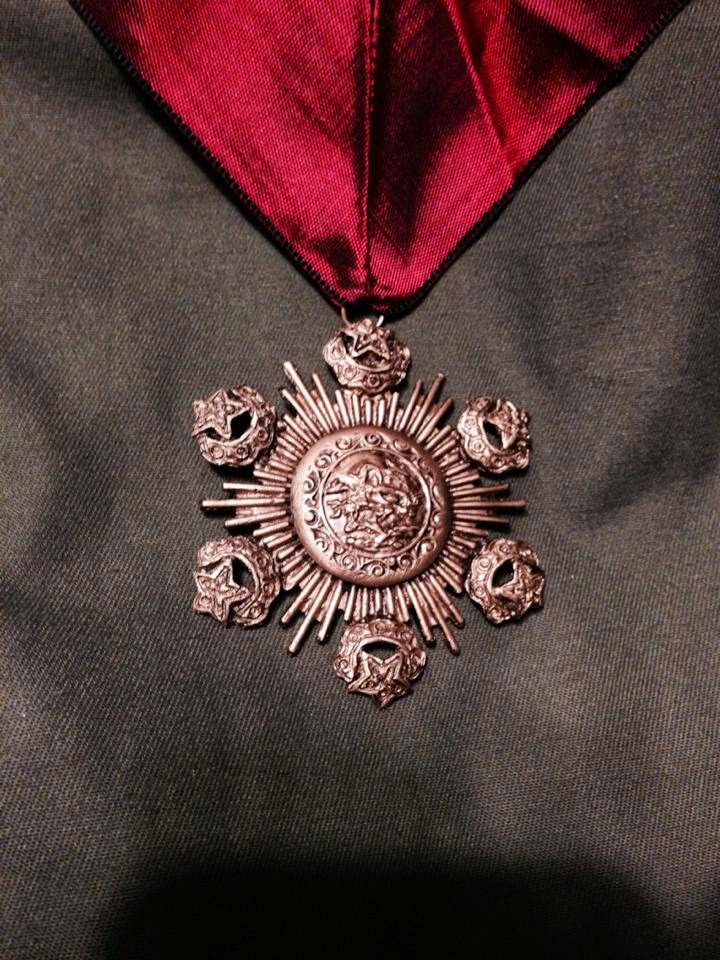 Doc G - Very cool! Have you done any work in films?

Jeff - Not exactly . . . but one of my Dracula medallions did get used recently in the Amy Heckerling film VAMPS. Malcolm MacDowell wears my piece throughout the entire film. 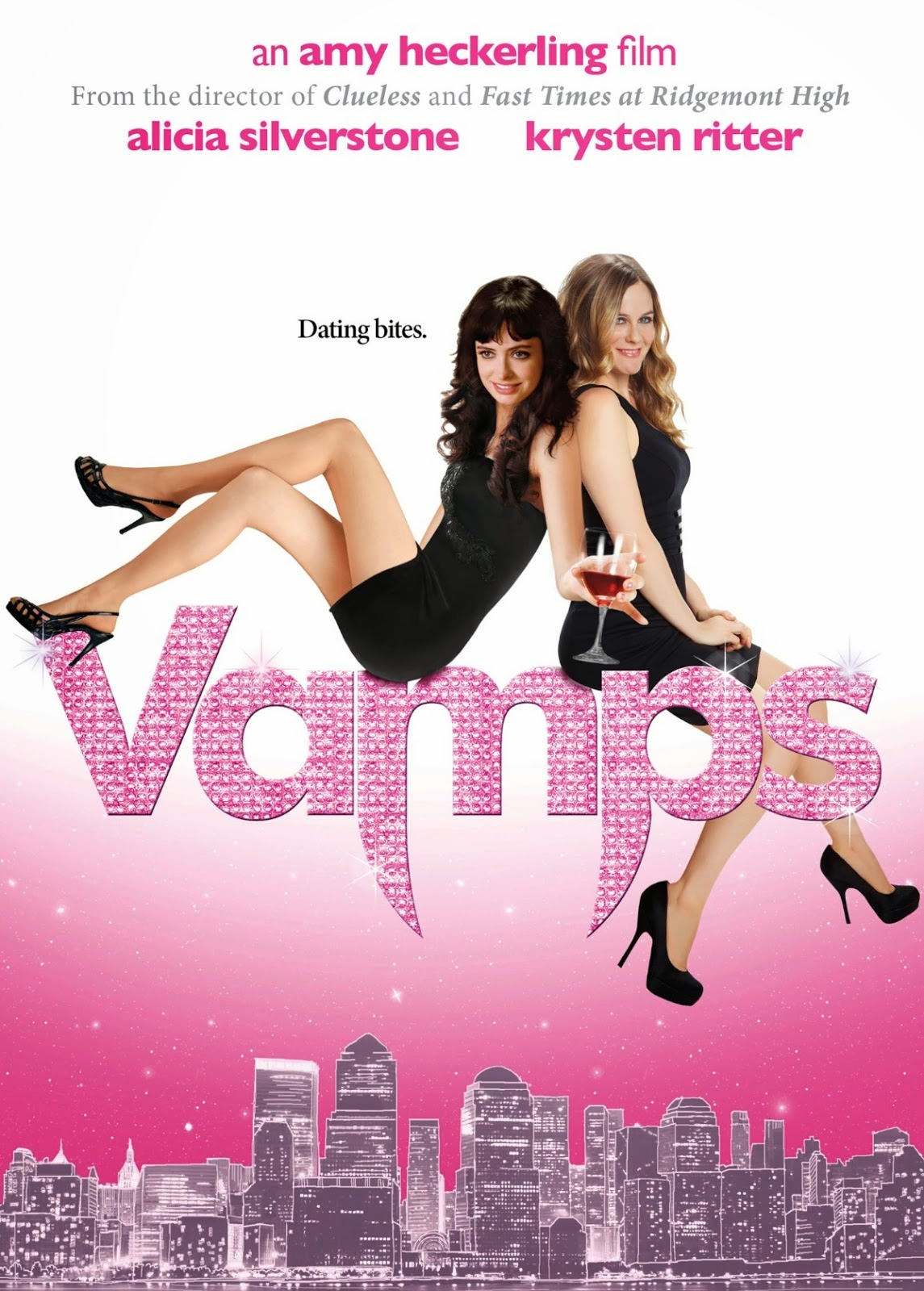 Doc G - How cool is that?! So are there any actors or monsters you’ve been wanting to do a mani Yak of but haven’t gotten around to yet?

Jeff - Oh, yeah . . . I've got a growing list of Mani-Yack candidates. I've had a few private commissions of these recently too. I like to do the more obscure B-movie characters. Right now, I'm knocking around a Thriller/Michael Jackson sketch as well as Lurch from the classic TV series.
Thanks for having me, Doc.


Doc G - Absolutely, thanks for stopping in. Feel free to grab a spare brain off the shelf there to toss to the zombies on your way out.

Jeff - Much appreciated! You've got quite a selection to choose from.


Doc G - They seem to like the bad brains the best… don’t we all? And keep me posted on all your future endeavors!

Jeff - Will do. There's always something cool being cooked-up over at Mani-Yack Headquarters. 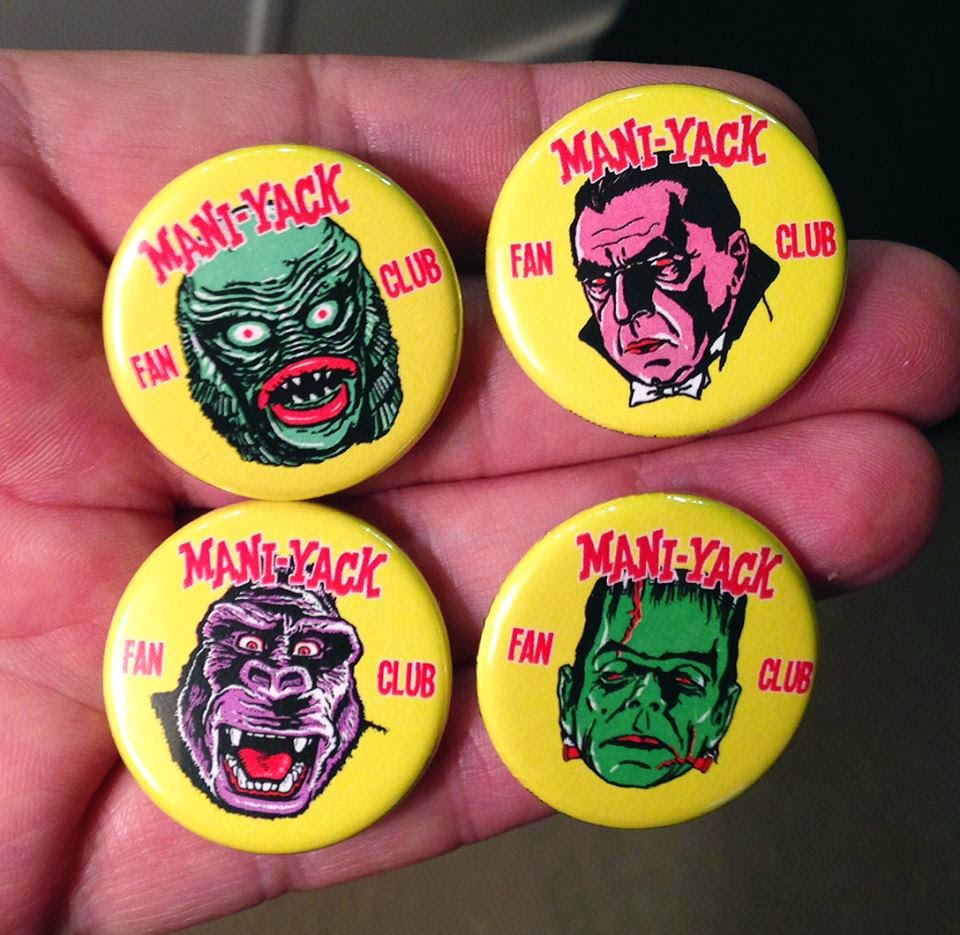 Speaking of which, let me give you guys some links to where you can check out all the awesome work from Jeff, and pick up some cool Mani Yak goodies for yourself. 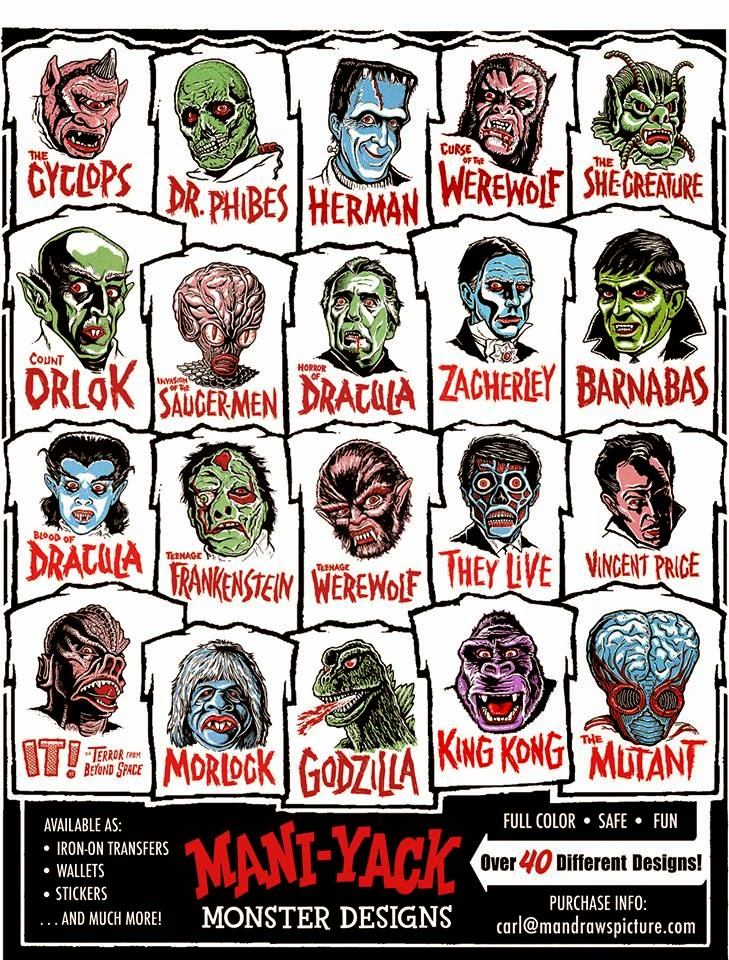 Firstoff is the Facebook group, always a good place to connect with jeff directly as well as other Mani Yak fans:
https://www.facebook.com/groups/126726744029436/ 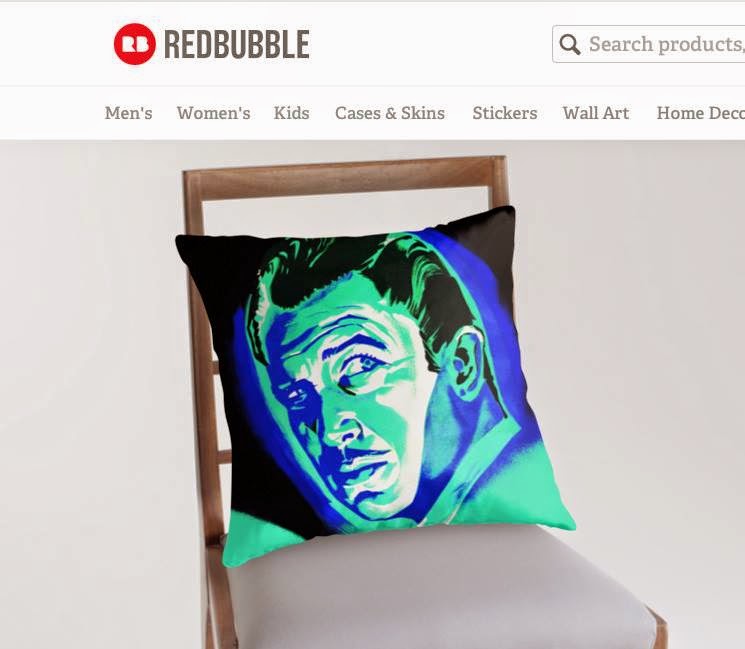 Next is Red Bubble, which features some cool products, such as pillows and wallets: 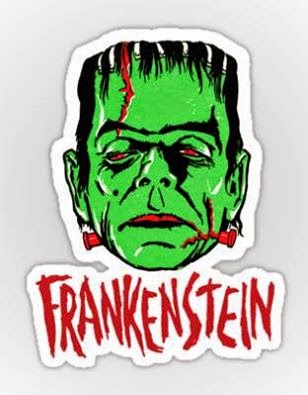 And lastly is Ebay, where he has a horde of goodies just waiting for a home:

Check out this awesome music video from my buddy Jeano Roid of The Creeping Cruds, featuring DJ Bonebreak of X on drums, Jeano on guitar. This is Jeano's tribute to horror hosts and old school horror - good stuff!