A Conversation with John Agar III

This interview originally ran in Scary Monsters Magazine #76. I had the pleasure of speaking with John Agar's son, John Agar III. I thought this would be the perfect time to post that here - enjoy!! 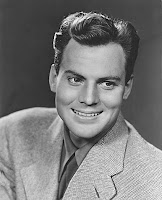 I recently got an email that really made my day. It was from John Agar… the third. This is the son of the late John Agar we all know and love, the one who fought THE MOLE PEOPLE, defeated THE BRAIN FROM PLANET AROUS, and battled a gigantic arachnid in TARANTULA. The younger Agar was writing to thank me for all the kind things I had said about his dad over the years in reviews and Youtube clips. John and I struck up a correspondence and spoke on the phone several times. He agreed to do an interview with me about his dad, his dad's work, and growing up with a famous father.


Doc G - Hi John, and thanks for taking some time to talk with me about your dad. So tell me a bit about growing up the son of John Agar. Did your friends know about your father and his career, and if so what was their reaction?

J.A. - Most of my friends were very aware of his career and were really cool about it. They would always comment on just how easy going and grounded he was - no ego, just a real nice guy. They always wanted to know what living with Shirley Temple was like and they would ask about John Wayne and Clint Eastwood and ask about his experiences on the sets and stuff like that. He would always take the time to chat with them and they all liked him a lot.

Doc G - You share his name – you must get a lot of comments when you tell folks your name is John Agar – probably a lot of fond memories of your father.

J.A. - Not so often anymore, although when I say my name some of the older folks I run into or film buffs like yourself will comment, “There was an Actor named John Agar…,” and I love the shock value of saying “Hey that’s funny, I have a Dad who was an actor named John Agar.” It’s a great conversation starter and I love to talk about my father, I miss him so damn much. It’s been 8 years since we lost him and 10 years since the passing of my Mother Loretta, and not a day goes by that I don’t think of one of them for a second or two. I loved them dearly and they were great parents, and ultimately great friends too...that’s an awesome and rare thing, being older now I can see that.

Doc G - Are you a fan of horror or Science Fiction movies?

J.A. - Absolutely!! In a big way I have always been a big sci-fi and horror buff.

Doc G - Did you see any of your dad’s movies on the big screen?

J.A. - Well I saw all of his later films like the KING KONG premiere and NIGHTBREED and of course MIRACLE MILE and a lot of the more recent work. I have seen a lot of the old Universal stuff at sci-fi conventions and what not.

Doc G - Did you ever go to the set with your dad when you were younger?


J.A. - I was on the set of JOHN CARPENTER’S BODY BAGS where Dad worked with Mark Hamill, Twiggy, Roger Corman and David Cronenberg. I was at most of his later shoots… I would go with him to raid the Craft service tables (Lol).

Doc G - I understand you also got to go on the set of KING KONG with your dad. Tell me your memories of that.


J.A. - Basically just getting full run of the entire area around the World Trade Center and getting to meet the Cast and also seeing the view from the top floor (roof). We got to see a very large mock up of King Kong in the Plaza area - it was a lot of fun. 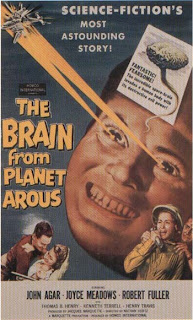 Doc G - The BRAIN FROM PLANET AROUS is definitely one of my favorite films that your dad made. I understand he had difficulties on set with that one?

J.A. - Yeah he sure did. They had him in these Silver contact lenses that were flaking off silver paint in his eyes. To the day he died he blamed this movie and those flecks of paint on his eye problems. What we will endure for art, huh?

J.A. - Yes, that was the movie FEAR with Ally Sheedy. At one point they were shooting him with a Shotgun and he falls back into a table. If you watch it was real brutal and obvious that the actor (my dad) took a real jolt. He actually cracked his ribs, but refused to tell anyone and finished shooting. He was almost 70 at this point.

Doc G - What did your dad think about his films when they would air on television? Did he watch them?

J.A. - We would often sit up together when we lived in Burbank and sometimes I would get him to watch an old film with me. He would tell great stories about specific scenes and events at commercials, although I feel that this was just for me and he could really care less. He was in them and they were old work…some people plumb, my father acted. A lot of it was a job, but he loved the fans with an awesome and true reverence.

Doc G - Do you remember if he mentioned any of his own films that were his favorite?


J.A. - I really remember that he felt especially proud of his early work, SANDS OF IOWA JIMA, FORT APACHE and YELLOW RIBBON. I do recall that he mentioned HOLD BACK TOMORROW, too. I don’t think he really had a specific favorite just a lot of great memories of the experiences of working on some more than others.

Doc G - How about you? Any of your dad’s movies, particular his sci-fi/horror films, that are your favorite?


J.A. - Definitely, BRAIN FROM PLANET AROUS and all the better Universal stuff like the THE MOLE PEOPLE. Like I said, I am a big sci-fi buff so how lucky was it to be the son of the greatest “B” sci-fi guy ever?

Doc G - Ever meet any other famous actors or directors who were friends of your fathers?

J.A. - Tons, where do I start? Richard Webb (Captain Midnight) was his great friend and they would always go to Sportsman’s Lodge in Studio city for a breakfast club called Jockos breakfast club (Jocko Mahoney the Range Rider). I met all the old stars like Gene Autry and Pat Buttram, and over the years I met a lot of the old time big stars like Bob Hope, Glenn Ford, Eddie Bracken and we were always at greets and functions and parties.

He knew John Wayne, of course, who would call every year to wish us a Merry Christmas. I know that he was very close with a lot of character actors like Jim Davis from DALLAS and John Larch (played Bill Mumy’s Dad in a famous TWILIGHT ZONE episode) and I know he loved to Golf and he played with all the old greats like Bob Hope, etc.

Doc G - You were telling me that Ed Wood used to call the house from time to time?

Doc G - He never worked with Ed did he?

J.A. - Oh no. My dad was in some real B-movies in his time, but he had standards... I believe he may have even been helping Ed with an AA related issue at the time…

Doc G - You mentioned that you had worked a little in effects for a movie – tell me about that.


J.A. - I used to work for a Technology Company called Micropolis and they made the first AV rated hard drives in the 90’s, (Avid non linear editing systems OEM Drives ). I sold these to effects houses and a lot of Studios. Todd Rundgren and Graham Nash both did PR films for our products and they were used in a lot of the work like FOREST GUMP and TRUE LIES and the first TOY STORY. I sold the equipment that was used, not any of the actual creative work. 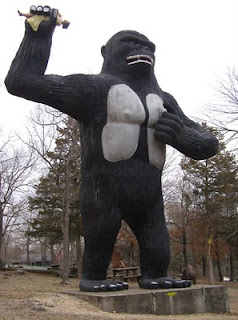 Doc G - OK, I have to ask about something. I know there was a Dinosaur Park in Arkansas that had John Agar’s name attached at one point. Can you tell me about that and how did his name come to be associated with it?

J.A. - Well, that’s actually sorta funny. My mother was in Real Estate and her friend / broker June Davidson bought land in a Beautiful part of Arkansas called Eureka Springs. Well there was this old Dinosaur Park there that was built by some guy as a roadside attraction, and June and her husband Ken Childs bought it and as a sorta joke / idea. They renamed it John Agar’s Land of Kong as a tie in to KING KONG (and a cheesy way to make a dollar), and my Dad said sure whatever. We went there once and they had hung up a huge painted King Kong and a picture of the Ayatollah Khomeini with a rope around his neck, very popular at the time (1979).

Doc G - Your father was married at one time to Shirley Temple. I understand they divorced and didn't quite part on the best of terms.

J.A. - Yeah, my Father was always very protective of that part of his life. I do know that he was even written about in a book by Mrs. Black where she really tore into him and wrote some very hurtful and misleading things - realize that this is literally 25 years plus later.

When we saw those words it hurt us, my Brother and I, in a big way. That’s our Dad and this person is telling outright lies and we knew it. We would say, “Dad say something,” and he wouldn’t let us tell anyone anything. He wouldn’t even deny things or say a thing, regardless if he knew they were false or true, by hospital records or verifiable written records.

He would just not say anything. Well, in the end he proved to me what the bigger thing to do is. I do know that I can’t be that strong and have made my feelings known now that he is gone….but did you know that she was the last person he spoke to on the phone before he passed ?

Doc G - Your father is fondly remembered by fans worldwide, and I appreciate your taking the time to talk a bit about him and your own experiences as well.

J.A. - Well, thank YOU for the respect and reverence you’ve shown my father. My dad was aware that some of his later films were less than CITIZEN KANE, but he always put his heart into his work and loved his fans. He told me that if even one person gets enjoyment of his work then he’s done his job. I wanted to personally thank you for the very nice way you remember him, if you ever met him you would know he was just a real sweet man.
at Thursday, February 03, 2011