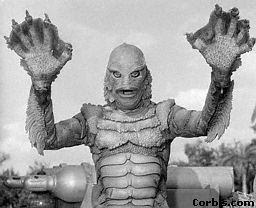 Just found out Ben Chapman, the gillman (on land) in Universal's Creature from The Black Lagoon, passed away. Here is the information on his website, the-reelgillman.com :

Ben Chapman passed away at 12:15 am Hawaii time on Thursday, February 21 at the VA hospital in Honolulu. His health began to deteriorate February 12 and he was admitted to the hospital on February 20. His life support was turned off Wednesday around noon and his pacemaker was turned off shortly before he died. He died peacefully with his wife, Merrilee, and son, Ben Chapman III, by his side.

His body will be cremated and a memorial service will be held at a church near the beach in Honolulu. More information will be distributed as it becomes known. Ben was a great guy and will be missed by his fans and friends everywhere. Over the past few years he had traveled the convention circuit and seemed to legitimately enjoy it. I'm glad he got the chance to meet the fans and see firsthand what impact his performance had on people who still have fond memories of this, the last great Universal monster. I was honored to get to meet Ben on several occasions, and the last time I saw him he remembered me from a previous meeting and told me he had just been thinking of me because he had met someone else from Tennessee lately. I have a terrific interview with Ben that I will post on youtube soon and put up here too.