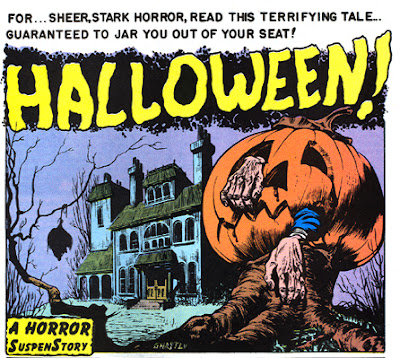 After writing yesterday's blog about William Gaines I got to thinking about EC comics and their influence on me. It seems through the years their influence keeps popping up time and again.

As I mentioned yesterday, I didn't read a lot of EC books as a young mad scientist in training, but I did get my hands on plenty of their imitators. I had a nice sized stack of horror and sci-fi comics that I read and reread regularly. Their campy sense of humor and dark, gory stories were right up my alley. I later bought the EC reprints and of course loved those too.

When I got out of college I started my own company and went the self-publishing route. Together with my good friend Chuck Angell we formed Out of the Cellar comics. The first comic we ever produced was, appropriately enough, a horror anthology comic called Monkey Stew, which featured a creepy old man hosting a series of stories to a young couple whose car broke down in a rainstorm.

This past summer I got my first tattoo. I had thought about getting one for a while, but couldn't decide what I wanted engraved on my skin for permanently. I tossed a lot of ideas around in my noodle, until I finally found the perfect tattoo: 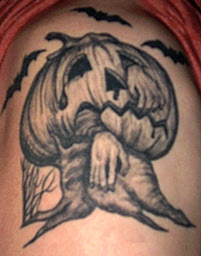 It's a picture from the opening splash panel of the Ghastly Graham Ingels story HALLOWEEN, from SHOCK SuspenStories No. 2. It was perfect because reflected several of my interests all in one image – 1st, the image is from a comic, reflecting my comic book past, 2nd , it is a horror image so it represents my horror host career and love of horror, and 3rd , representative of my lifelong love of the Halloween and everything associated with the holiday.

I added the three bats at the top, one for each of my three boys. It was done by Ben Dixon at Lone Wolf Tattoo here in , and he did a terror-ific job on it. I even managed to work it into a segment of a recent episode! So here’s to EC comics, the Crypt Keeper, the Old Witch, and the Vault Keeper, horror hosts extraordinaire!!