2008 was a terrific year for big budget horror, fantasy and sci-fi movies. There were some really fantastic films released, and the choice for Best Movie was really tough this time around.Here's a partial list of some of the movies release in 2008...
Cloverfield
The Spiderwick Chronicles
Let the Right One In
Diary of the Dead
Iron Man
The Chronicles of Narnia: Prince Caspian
Indiana Jones and the Kingdom of the Crystal Skull
The Happening
The Incredible Hulk
WALL-E
Hancock
Hellboy II: The Golden Army
Journey to the Center of the Earth
The Dark Knight
The X-Files: I Want to Believe
The Mummy: Tomb of the Dragon Emperor
Igor
Saw V
Quantum of Solace
Twilight
Punisher: War Zone
The Day the Earth Stood Still
The Curious Case of Benjamin Button
The Spirit
It's by no means a complete list, just some of the ones I felt were deserving of possible Rondo inclusion.
Looking at the above list, I have a hard time narrowing it down to just one choice.
I almost chose Cloverfield (it comes in a close second for me), but I have issues with that movie. My number one beef with it is the camera work. I understand that the hand held look is because we're seeing the action through a video camera held by a scurrying survivor of this devastating event (a giant monster invasion), and we're watching the events unfold first person as it happens. 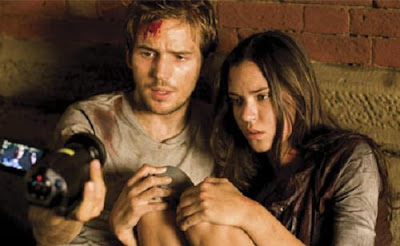 It's a great idea, but the problem lies in the execution. I felt the filmmakers had little respect for the viewer in this area - the whirling, shaky, constantly moving camera movement was way overdone, and in fact I literally felt nauseous watching it, (and even had to turn away from the movie at one point due to motion sickness). This constant camera motion also became distracting to the point of pulling me right out of the story.Instead of being swept up in this gripping event I was constantly annoyed at the camera work. 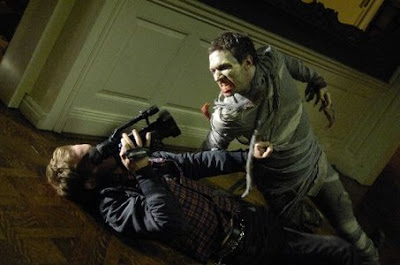 For an example of how this technique can be used properly check out Diary of the Dead. The lead characters in this film are also on the run in the face of a disaster, a zombie plague in this case, and we're seeing the action through the lens of their video camera, too.This film manages to pull off the same effect without the nausea inducing overuse of Cloverfield. I didn't think it was as good of a movie as Cloverfiled, but I did at least appreciate Romero's restraint on the hand held technique.

The Dark Knight was a good film, and featured an amazing performance by Heath Ledger as the Joker. But although I liked the movie, I didn't feel it was the best picture of 2008.
My choice for Best Movie for 2008 has to go to Iron Man. It was a near perfect comic book adaptation, and really hit a home run in my book.Fantastic special effects, great casting and acting, and a fun storyline. I grew up an avid Marvel comics reader, and for me it really held true to the source material. It was as if the pages of a comic book had come to life. I had my doubts going in whether they could convincingly pull off the armor effects, but it was really well done.Robert Downy Jr. was fantastic as Tony Stark, and Jeff Bridges was a perfect villain. I liked the always lovely Gwyneth Paltrow as love interest Pepper Potts too.It was just a really entertaining movie, and in my opinion the best of 2008. So it gets my vote for Best Movie in the 2008 Rondos!
at Wednesday, January 21, 2009