I SCREAM YOU SCREAM...

Listening to the latest Rue Morgue podcast and their HORROR COURT was interesting. Stuart Feedback Andrews squared off against Alexandria West (Co-host of The Faculty of Horror Podcast with Andrea Subisatti) in a 2-part podcast discussing the virtues of the film and leaving it up to the viewers to decide, by votes, whether Scream is guilty or not guilty of being a horrible film, as Stuart suggests. Alexandria does a fine job defending her point of view, as does Feedback. It is a film I’ve been tempted to write about for a while now, as it was THE biggest film of the 90s, and one that is fairly polarizing in terms of audience reaction.


So. My thoughts on Scream, 1996. Director Wes Craven. Miramax Films. 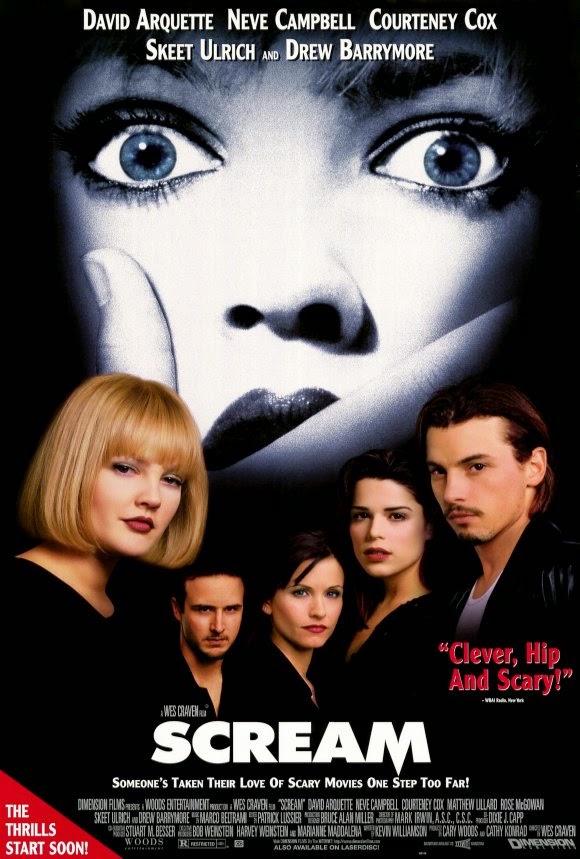 In college I studied Art History pretty extensively, and one thing that always stuck with me was the theory that every successful art movement is a reaction to the one directly preceding it. The same holds true for all art forms, including film and music. Take, for instance, the example of Punk Rock music. It is a direct reaction to the excesses of 70s radio rock, the long, drawn-out over-produced jam tracks, polished to the point of tediousness with all the energy drained out of it. Enter Punk Rock, a refreshing breath of explosive energy and short, raw tracks that seemed a diametric opposition of its predecessors. In the 80s Heavy Metal was all the rage and more and more bands jumped on the craze until the music became a joke. The bands in the late 80s/early 90s were almost a parody of the early metal bands. The genre had become increasingly outlandish and self-effacing.  Compare a band like Poison to the early 80s Invasion of British metal bands – if you didn’t know better you’d think they’re a parody, an intentional mockery of their predecessors. The scene was in dire need of something new and fresh; enter Nirvana and Grunge, exactly the stripped-down shot in the arm so desperately needed. 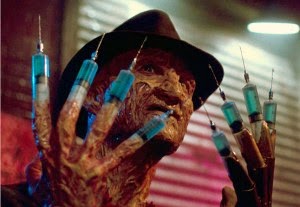 Horror movies in the 80s were the same way. Slasher films were incredibly successful and an ever-increasing number of them began popping up in the early 80s. By the end of the decade, however, the genre was overwrought and tired, and the slashers popping up in the 90s were pale imitations of their predecessors, recycling the same tired plots and setups. They had become, in many ways, downright silly, if truth be told.

SCREAM came along in 1996 as the icing to the bloody cake, with a mega budget, superstar cast, and self-aware characters spouting pop culture facts and horror movie “rules” for survival. Scream was to horror movies what Poison was to Heavy Metal; a joke, a parody, a mockery of its predecessors - to put it bluntly, an embarrassment to serious horror movies, albeit a financially successful one. But then Poison raked in millions of dollars, too.


BUT here’s the difference; the early slasher films were trying to make a legitimately scary horror film. There is a real sincerity to them, an honesty that is lacking in Scream. They didn’t have the budget or production quality behind them that Craven had, but you had to admire them in spite of it because they were sincerely giving it their all. Craven, on the other hand, wasn’t trying to make a real horror film, because he was jaded by this point. The previous year he had directed the dreadful flop VAMPIRE IN BROOKLYN. He was out of tricks, and all that was left was to parody real horror films, something he had previously experimented with in WES CRAVEN’S NEW NIGHTMARE two years prior. He almost passed on directing Scream, and is on record stating he was thinking of moving away from the horror genre. Scream was a disingenuous sham, nothing more than a string of gimmicks. The entire killer on the phone plot was a tired trope even in the 90s, channeling such films as WHEN A STRANGER CALLS, BLACK CHRISTMAS, THE NEW YORK RIPPER and even William Castle’s I SAW WHAT YOU DID and so many others. 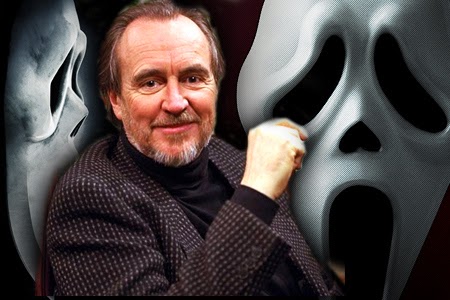 I’ve had arguments with friends (well, one in particular) who credit Scream with saving the horror genre, when this is honestly a bit of historical rewriting. In truth Scream almost killed the entire horror market, and made a mockery of the genre. Its effect was far reaching, spawning a host of equally tiresome self-aware flicks and near comedies. Scream was a big budget, bloated franchise full of pretty faces and superstar actors. It was the equivalent of 70s stadium bands, full of excess and extravagance but little substance. 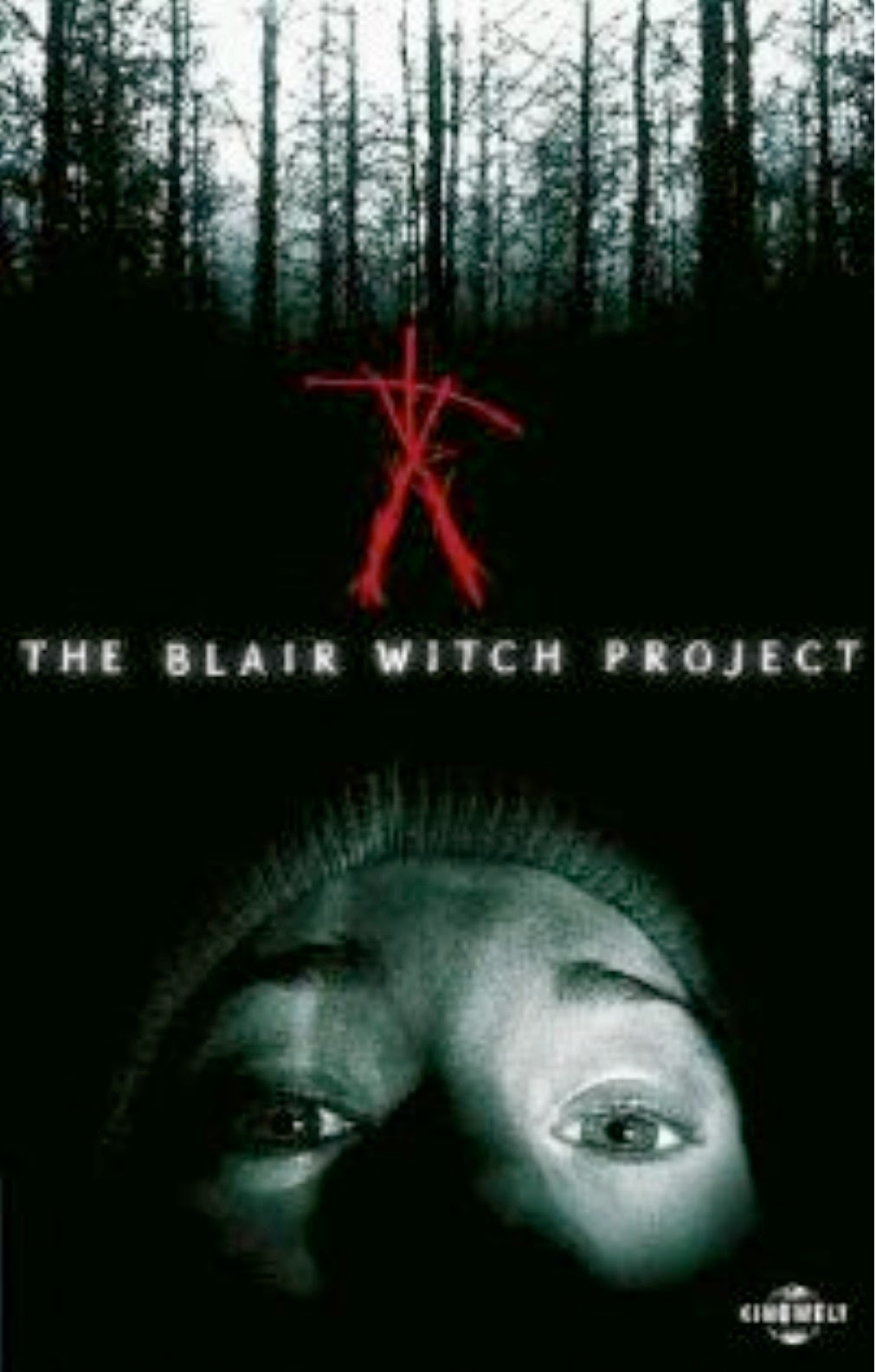 It is far more accurate to say the film that turned the tide in horror was THE BLAIR WITCH PROJECT, a little film made on a shoestring budget that shocked the world with its success. Suddenly the path was paved – fuck spending millions and hiring “stars” for your film, now anyone with a camera and an idea could make their own movie! Blair Witch was the Ramones of the horror world, inspiring legions of filmmakers to grab a camera and start shooting.


You know what the working title for Scream was? SCARY MOVIE. How appropriate that the outright comedy spoof film of the same name came out in 2000. THAT movie, unlike Scream, doesn’t masquerade as a real film; it tells you outright that it is a comedy, a spoof, a parody of the genre, a joke. Just as Scream is. And a lame one at that.
at Wednesday, May 14, 2014