Dr. Gangrene continues the 2020 Halloween countdown with a look at The Simpson's version of THE RAVEN.

Dr. Gangrene continues the Halloween countdown of the films of Edgar Allan Poe with a look at The Tell-Tale Heart.

Dr. Gangrene's Halloween countdown continues with a look at the 1991 version of The Pit and the Pendulum from director Stuart Gordon.

Dr. Gangrene continues the Halloween countdown with a look at the Roger Corman classic, The Pit and the Pendulum. 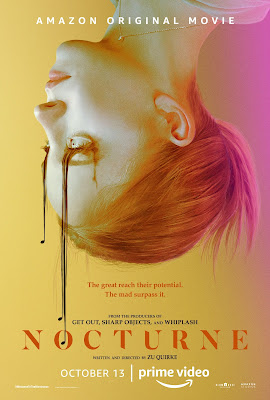 Nocturne is part of the Welcome to Blumhouse series of films from Blumhouse Studios, which features 8 films that will debut on Amazon streaming. The first four air this October, the rest in 2021.

A pair of twin girls named Juliet and Vivian (Sydney Sweeney and Madison Iseman) are enrolled in a prestigious arts school. Vivian is outgoing and popular, while Juliet more reserved and withdrawn. Both are gifted at playing the piano, but Vivian has always been the more successful – and favorite of their parents. When they arrive at the school, they learn that the soloist in the school concerto – a girl named Moria (Ji Eun Hwang) – died a week prior, having committed suicide, and there will be an open competition to decide the new lead. Vivian is the assumed forerunner. One day Juliet stumbles upon a notebook that previously belonged to Moira, her theory book, containing strange drawings, musical notations and messages written backwards. She finds herself drawn to it, and into a world of the supernatural, using it to channel her own talents and try to win the lead in the concerto…

Nocturne was written and directed by Zu Quirke, who is seriously channeling Suspiria with this tale of a musical academy with a supernatural secret lurking beneath its facade. However, unlike the 1977 Argento film (and its 2018 remake) this one doesn’t lean into the horror element fully, rather swerving at the last second to a more pedestrian ending that, while still good, falls short of the potential it was building toward. The acting is good across the board and Sydney Sweeney really shines in the role of the tormented Juliet.

Nocturne is a stylish and well-made tale of jealousy, ambition and sibling rivalry. I just wish it had embraced the horror fully. Just before she goes onstage to perform Juliet’s principal tell her to, “Give them hell.” Unfortunately, it didn’t quite go there. 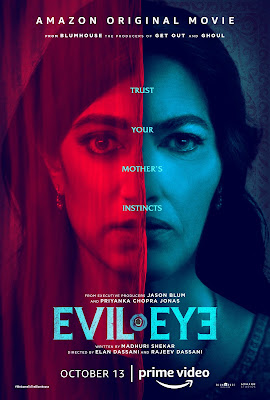 Dr. Gangrene continues the Halloween countdown with a look at The Black Cat.

Dr. Gangrene's Halloween countdown continues with a look at the 1964 Italian film Castle of Blood.

The Doc keeps the Halloween countdown going with a look at an episode of the TV show Suspense (1949).

Dr. Gangrene continues the Halloween countdown with a look at the Bela Lugosi classic Murders in the Rue Morgue. 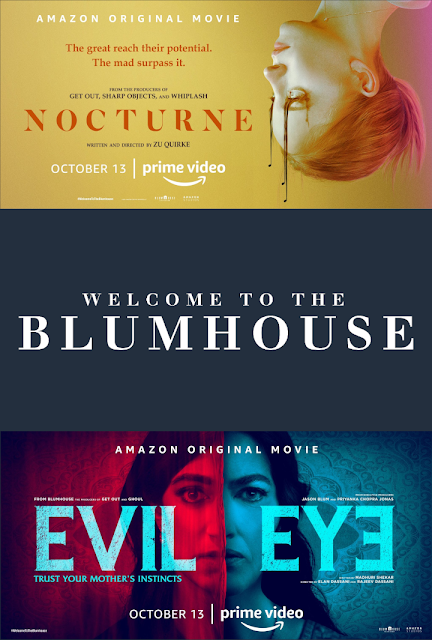 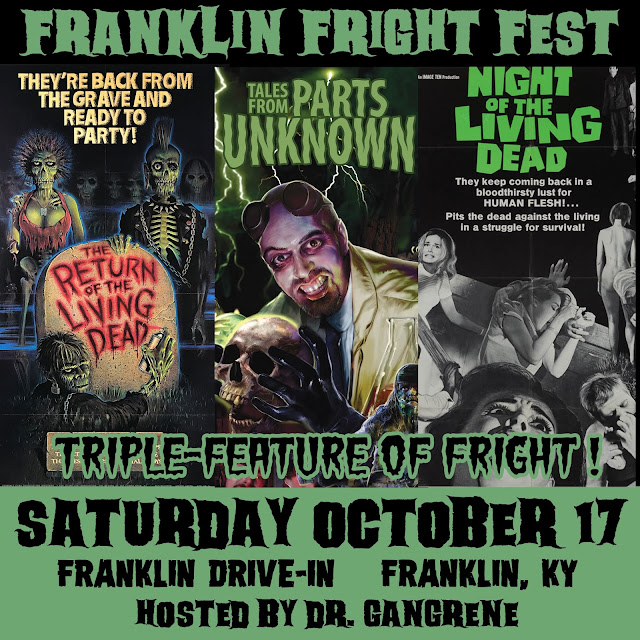 The new Dr. Gangrene anthology film TALES FROM PARTS UNKNOWN is screening next Saturday, October 17th at the Franklin Drive-in!

Come out and catch this film under the stars with a pair of zombie classics - RETURN OF THE LIVING DEAD and NIGHT OF THE LIVING DEAD!! The event will be hosted by the Physician of Fright himself, Dr. Gangrene.

The Franklin Drive in is located at:

Just over the TN state line. So make plans now to shamble out for a night of fright at the Franklin Drive-in!!

Dr. Gangrene keeps the Halloween countdown going with a look at the
1981 Lucio Fulci film The Black Cat.
at Sunday, October 04, 2020 No comments:

Dr. Gangrene continues the Halloween countdown of the films of Poe with a look at Legend of Horror (1972).
at Saturday, October 03, 2020 No comments:

Dr. Gangrene's Halloween countdown of the films of Edgar Allan Poe continues with a look at The Premature Burial, starring Ray Milland.
at Friday, October 02, 2020 No comments:

Dr. Gangrene continues the tradition of a Halloween countdown - this year's theme is films based on the works of Edgar Allan Poe - an EDGAR ALLAN POE-DOWN!! All October we'll present a video a day looking at a different Poe movie or TV episode.

The countdown kicks off with a look at the made for TV special, An Evening of Edgar Allan Poe.