UPDATE: Since the time of this initial posting SHOUT! Factory has reviewed and released claim on the video in question. See my post here for full details.

This is a follow-up to yesterday’s post about SHOUT! FACTORY and THE BRAIN THAT WOULDN’T DIE. This has been a hot topic here and on facebook, where I posted the article. Lots of people are angry and disappointed that SHOUT! FACTORY would continue pushing such a flimsy narrative as the fact they “own” this public domain film. That begs the question, why are they doing this?

It is very simple. Money. If you go to YouTube and type in “The Brain that Wouldn’t Die” you are presented with multiple pages of videos of that film – some feature the entire film, some just clips from it, some reviews. YouTube offers 22 videos per page – and there are hundreds of videos that can be “claimed” by a copyright holder. Some have views in the thousands (even hundreds of thousands). 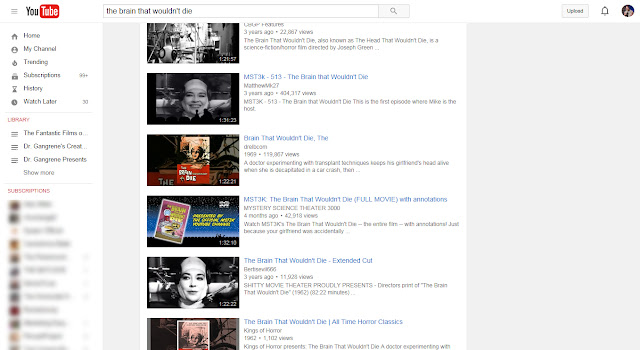 Even if the monetary amount from any one video isn’t that much, multiply that by hundreds of videos and you see it quickly adds up. My fellow horror movie host Karlos Borloff in the DC area was mentioning this morning that he is having a similar issue, once again from our good friends at SHOUT! FACTORY. BUT it is with a totally different film – ATOM AGE VAMPIRE.

Who knows how many public domain films SHOUT! FACTORY is claiming “ownership” of on YouTube and monetizing.

The truth of the matter is that the blame for this lies with YouTube themselves, for allowing this to continue. They have a system in place where a person can claim to own a video and not have to show any proof. If it is questioned they merely continue to say they own it, and YouTube takes them on their word.
When I disputed the claim from SHOUT! FACTORY, here is the response I got back from YouTube:

SHOUT! FACTORY decided their claim is still valid!
Well of course they did! They’re not going to arbitrarily give up their easy money! How about you look at it yourselves YouTube, and make a determination, make them show proof of ownership – which doesn’t exist! -  before allowing them to make money off other people’s work!

It’s my hope that if enough people continue to expose YouTube’s shameful copyright system - as well as the shady practices of companies such as SHOUT! FACTORY - that something will eventually be done about this.

In the meantime here are the host bits – without the movie – for my hosting of THE BRAIN THAT WOULDN’T DIE, for your enjoyment… at least until Shout! Factory decides to claim ownership of it, too.