I had the pleasure of making another guest appearance on Monster Kid radio recently with my good friend Derek Koch to discuss the 1977 anthology film, THE UNCANNY. CLICK HERE TO LISTEN/DOWNLOAD THE EPISODE. 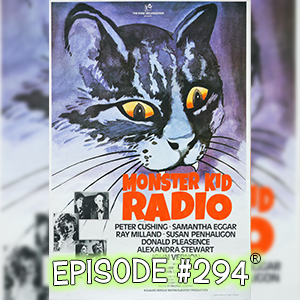 This is a pretty fun film featuring three short stories and a wrap-around segment all centered around the theme of cats. Not the best anthology of all-time, but not the worst either. It's definitely one of the more interesting though, in that all of the stories are wrapped around that one theme - cats. It stars Peter Cushing, Donald Pleasance, and Ray Milland - which is a pretty stellar cast, when you think of it. Made in 1977 - which means Cushing would have appeared in both this and STAR WARS the same year. It was directed by Dennis Heroux.

This film feels like an Amicus anthology film like DR. TERROR'S HOUSE OF HORRORS, THE HOUSE THAT DRIPPED BLOOD, TALES FROM THE CRYPT, etc. but it in fact is not an Amicus film. It was in fact produced by Amicus co-founder Milton Subotsky for Montreal’s ASTRAL FILMS and distributed by THE RANK ORGANIZATION (who also did VAMPIRE CIRCUS 1972, COUNTESS DRACULA 1971, and TWINS OF EVIL 1971), making it a British/Canadian co-production.

We go in-depth discussing the film and the individual segments, and the episode turned out great. I mention an issue of WEIRD TALES Magazine in this episode, as it had a cat story that featured a very similar (exact) punch line as one of the segments of this movie. The story was by Robert bloch, and called CATNIP. That issue of Weird Tales is available for download on Archive.org and features stories from some AMAZING writers such as Robert Bloch, Ray Bradbury, Manley Wade Wellman, Algernon Blackwood, Theodore Sturgeon, Clark Ashton Smith, H.P. Lovecraft, August Derleth, and Edmund Hamilton - all in one issue!! YOU CAN DOWNLOAD IT HERE - WEIRD TALES MARCH 1948.
The movie is available on Region 2 DVD through Amazon, and really needs a proper US release.