The 2008 Rondo Awards were announced Monday night, and I am proud to say we've been awarded a Rondo Award for the series of PSAs we did last year. Here is the official listing for the award: 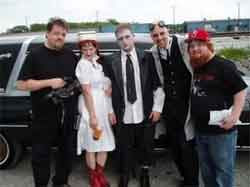 Which is pretty darn cool, because we put a ton of work into those PSAs. We didn't win either category we were nominated for this year - we came in second in the Fan Event voting, and third in the Best Horror Host category.

Want to send a big thanks out to everyone who worked on these psas - our director Cameron McCasland, who went above and beyond the call of duty promoting the heck out of these things, as well as writing two of them - Michael Creason who shot and edited the psas - all our actors, including Nurse Moan-eek and our zombies Chuck and Earl - and our crew members, especially Eric Sparks. And an especially huge thanks to Michael Hook and the CW58 for running these things on Saturday afternoons during the kids block!!

Here's to a great Rondo season and hoping next year's awards as fun as this one was!
at Thursday, March 26, 2009