The 2012 Fright Night Film Festival was held this past weekend in Louisville, KY. This was my first time attending Fright Night - Ken Daniels, evil genius/organizer behind the show had tried for years to get me to come to a show, but I was just unable for whatever reason. But this time around things worked out in my favor and I was able to attend, and was really glad I did as I had a terrific time. 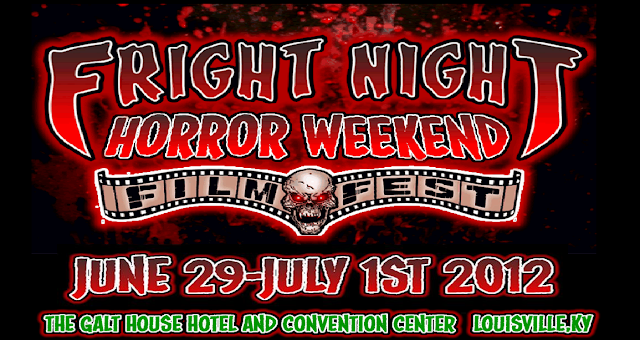 My son Luke went with me and we headed out early Friday morning. It is only a 2 1/2 to 3 hr drive to Louisville and is a really pleasant trip. Along the way we passed the cave city exit in KY and my favorite sight, a large fiberglass dinosaur advertising Dinosaur World Amusement park. It's a walk through attraction with fiberglass dinos, pretty cool place. I just love that they have one on the side of the interstate. Very Pee Wee's Big Adventure-ish. 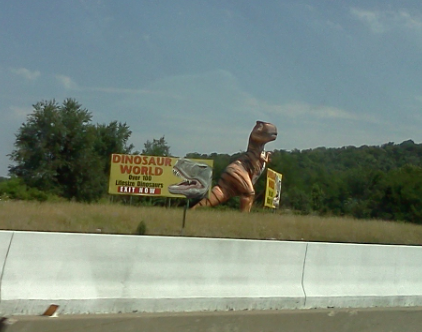 We got into town early afternoon and got set up before the show opened. Our table was in a hallway just outside the main dealer's room, which meant we got great floor traffic all weekend long. We were right next to a couple of other horror hosts, the Horror Dungeon crew (Cpt. Crypt AND Fenriz Fatal) and my good friends from Midnite Mausoleum, Blake, Marlena, and Robyn. I spent a good part of the show chatting with Blake, and got to do a little brainstorming with him for some possible future projects. More on that as they develop... 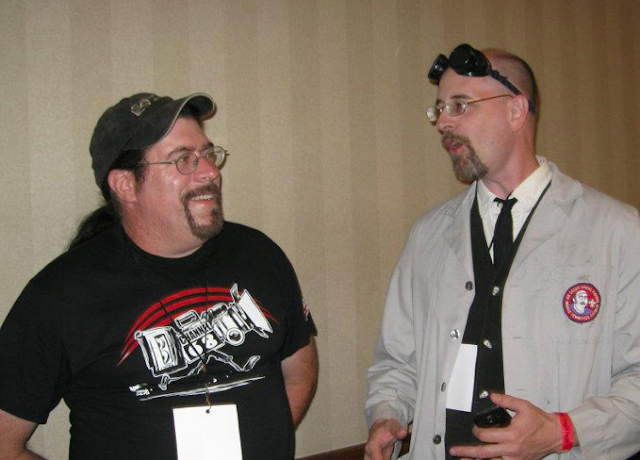 The tables were a little narrow, and I had a little trouble getting all my goodies on the table. I really need to find a more efficient way to organize my merchandise. I made a standup of the cartoon of my character that was drawn by artist extraordinaire Brian Maze, which got lots of comments and compliments. 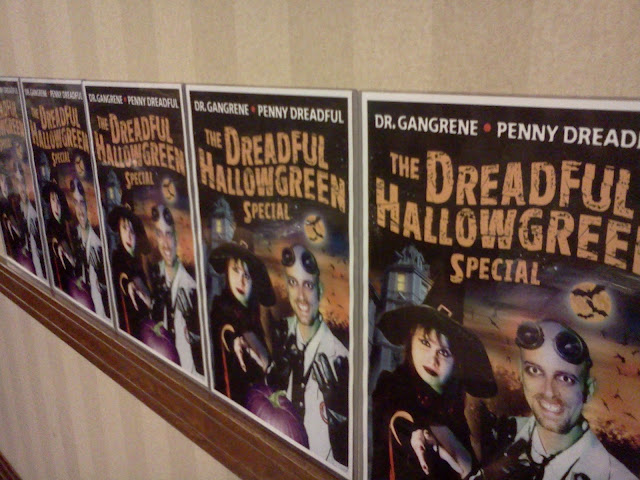 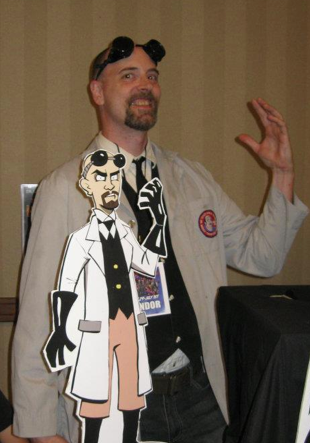 This shot was taken by another horror host who
was at the show, Dr. Mel Praxis. Thanks Mel! 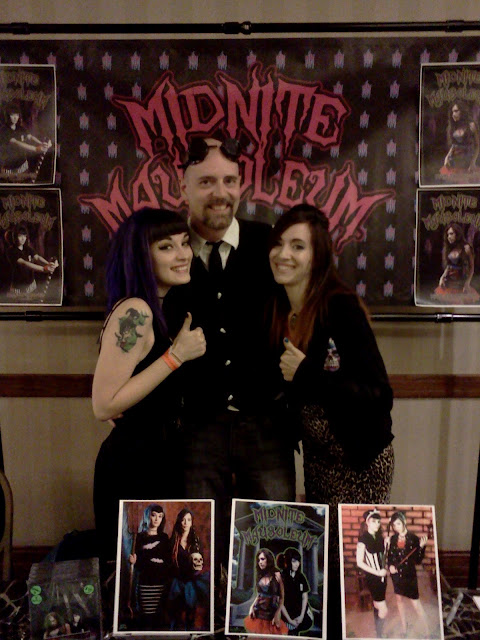 Robyn Graves and Marlena Midnite of Midnight Mausoleum,
the cutest horror hosts in the business. Their table was busy
all weekend, naturally!

The crowds for Fright Night were huge. It was packed all weekend and everyone seemed to be having a great time. The majority of people at the show seemed to be there for autographs. There was a HUGE guest list, with some big name stars like Bruce Campbell, John Rhys-Davies, Sean Astin, etc. Lines were HUGE for autographs. Now, I am not an autograph guy, never have been, so it was a little surprising to see how many people were willing to stand in line for hours and pay upwards of 30 bucks a signature (or more). But hey, that's the market now and if people will pay it, more power to them. 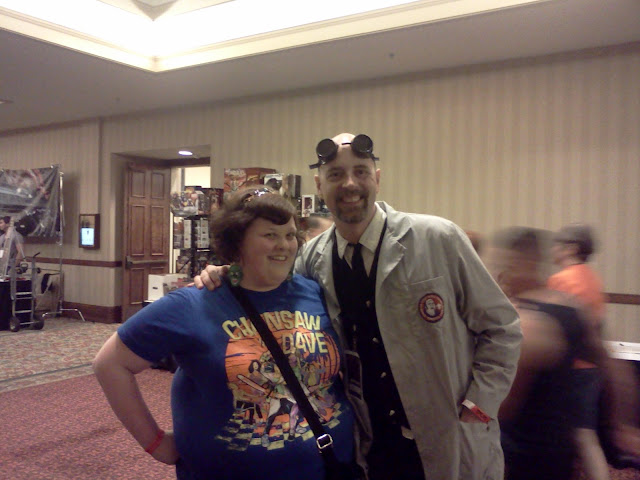 I finally got to meet Kristy Jet of Fright Rags and was pleased to find
she was as friendly in person as she is online!

Friday night we packed up early and headed to the Georgetown Drive-in in neighboring Georgetown KY. This has got to be the coolest part of the Fright Night show for me, but then I'm a drive-in theater nut! Every year the festival works in conjunction with the drive-in to show a classic film that features stars appearing at the show.  This year they showed Evil Dead Friday and The Devil's Rejects on Saturday. There was no way I was going to miss seeing Evil Dead on the big screen!! 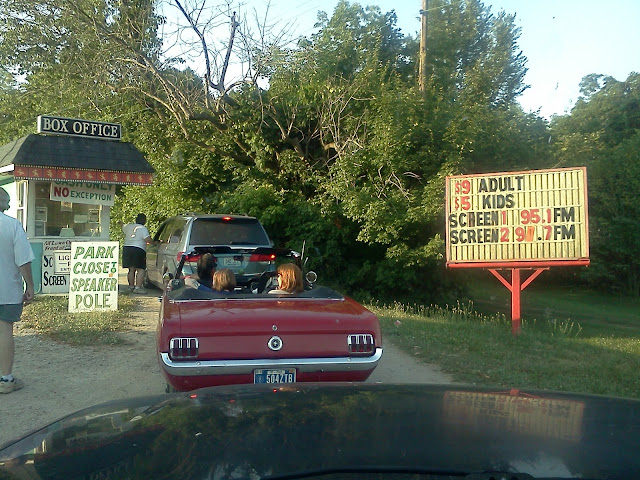 My buddy Jay's car at the drive-in entrance.
Notice those cheap prices for a double feature!!

The Georgetown drive-in has two screens, and each one was showing a double feature. They also have something that I've never experienced at a drive-in - working speakers. That's right, the speakers on the poles that are missing from most existing drive-ins were in place and fully functional for screen one. For screen two you tune in the sound on your car radio. 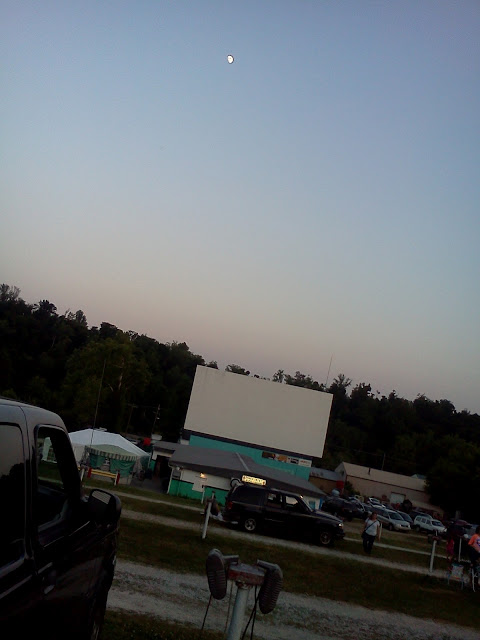 Moon over Georgetown! - Screen one. 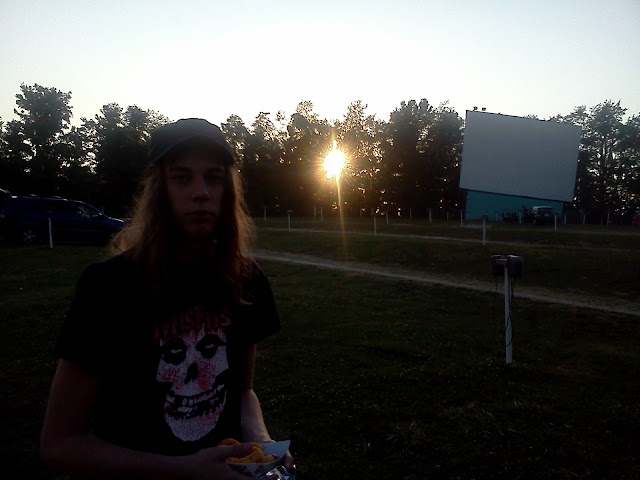 Luke in front of screen two at dusk.


Before the show we of course hit the snack bar. It was packed with goodies that were cheap - burgers, hot dogs, corn dogs, nachos, pretzels, popcorn, etc. My friend Jen and her son Will went with us, as well as several of J's friends who met us there. We had a nice little group. 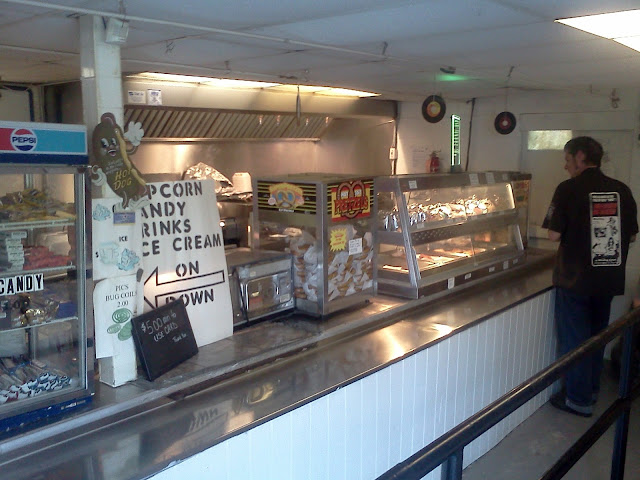 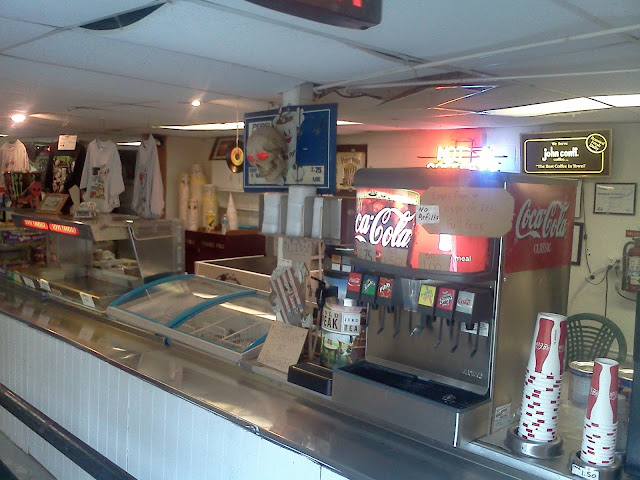 This fella guarded the drink station - a left over from the Halloween shows. Turns out every Halloween season they have a special series of screenings featuring classic horror films and they decorate the place and even have a little haunted house. This year they're doing an extra  special event that promises to be even bigger than previous years. More on that later, but suffice it to say I'll be heading back to Louisville this October!! 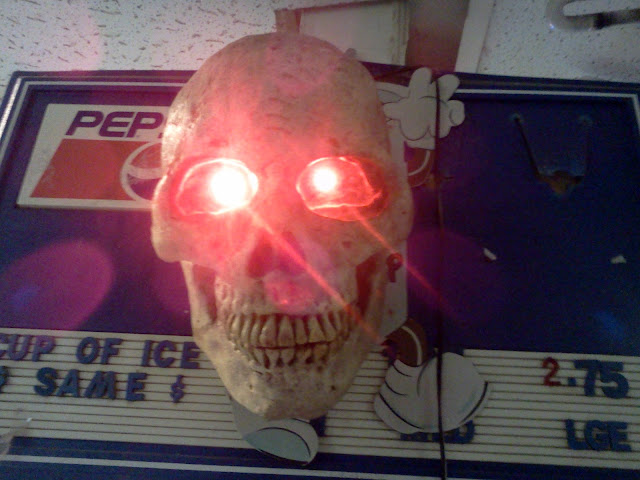 You WILL buy a soda! The skull commands it!

They even had some working arcade games including this badass Tron game! SWEET! I had to pose in front of it! 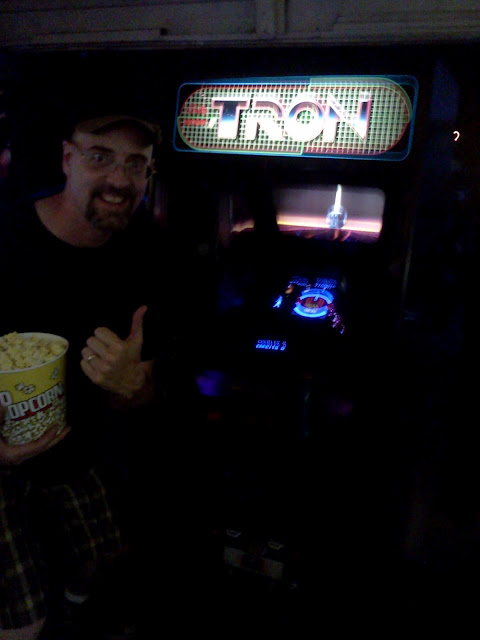 The movies on our screen were Abraham Lincoln Vampire Hunter and Evil Dead. Lincoln was first and it was completely ridiculous. I don't know what I expected but it was something better than this. Big, stupid action movie with lots and lots of flashy axe twirling. I was glad to see it, but even happier when it was over and they dove right into some CLASSIC DRIVE-IN INTERMISSION COMMERCIALS! Amazing! I have several tapes with these commercials on them, but never seen them played at an actual theater. SWEET! 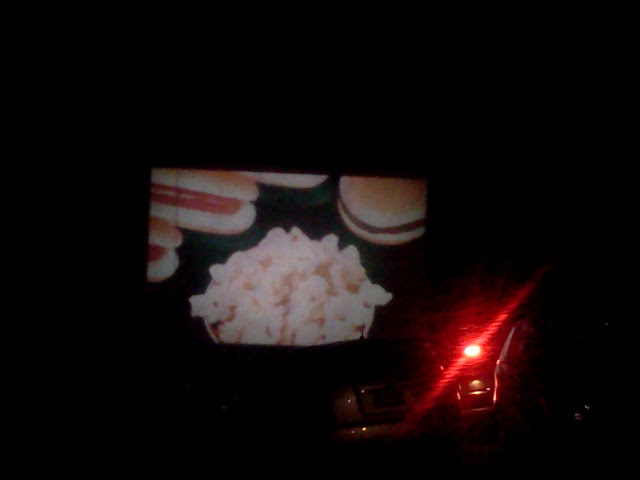 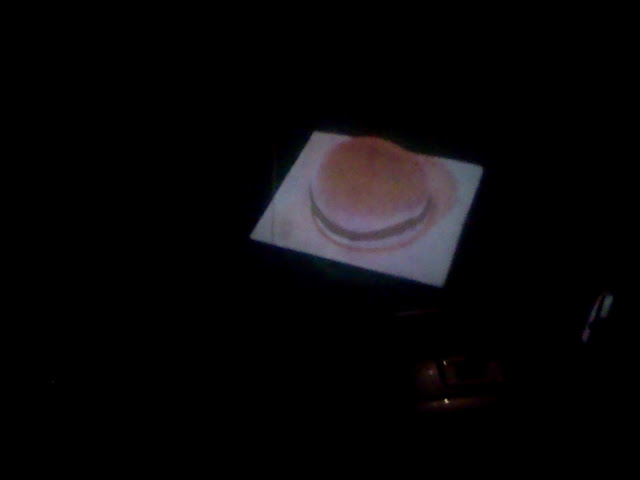 Then it was finally time for the main event, EVIL DEAD. I've seen it in a hard top theater but never at a drive-in, and it was even better outside. The print was gorgeous. Really amazing and I highly recommend the Georgetown Drive-in, it's a terrific theater. 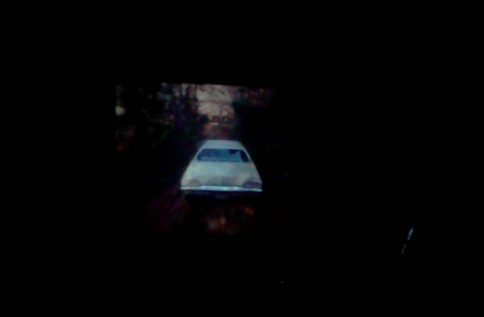 Back at the hotel day two and crowds were even more insane than day one. REALLY big lines and thousands of fans. Met lots of new people, sold some stuff and had a good weekend. 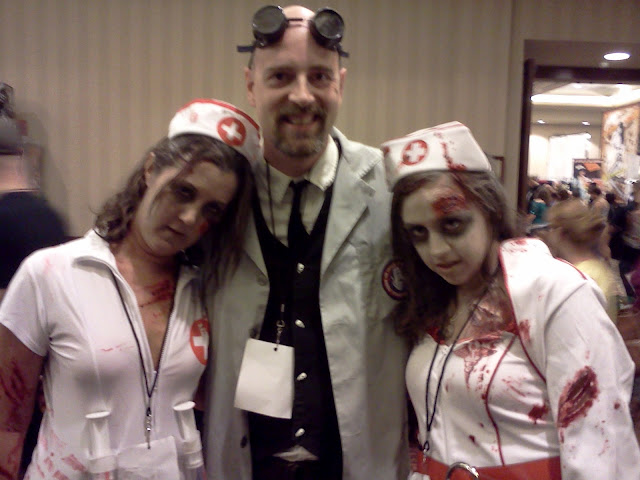 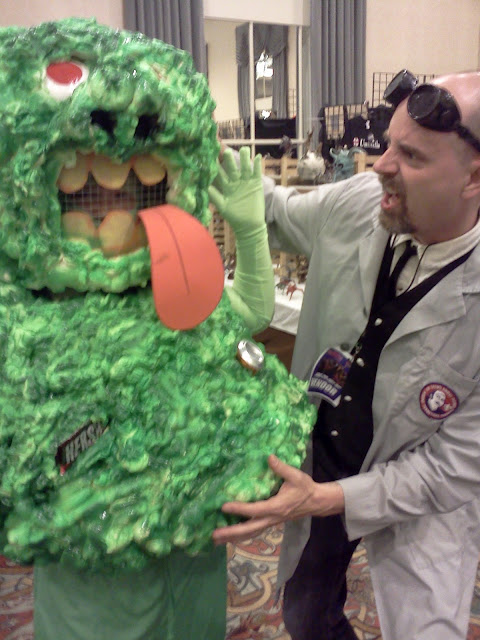 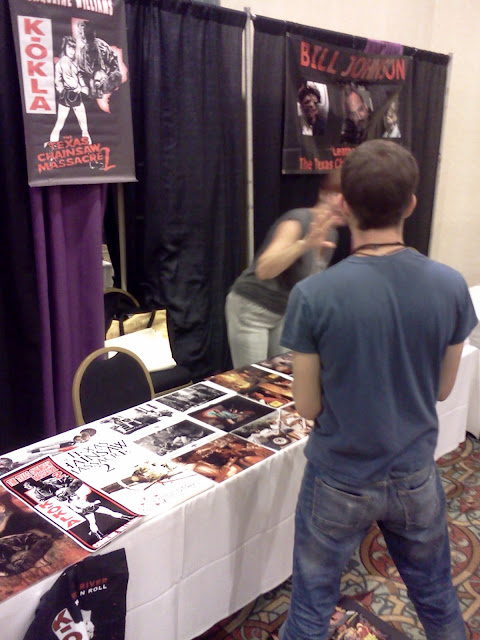 OK, this was one of the more humorous points of the weekend. I was walking around with my son taking pics of various booths and such, and I remembered that my friend Brandon had mentioned that he was a big fan of an actress that was appearing there. I thought it was Caroline Williams, but later found out it was Deborah Foreman he was talking about, who also had a table there but I never saw. Anyway, I saw Caroline's booth and she was standing there. I thought I'd snap a shot just to show him what she looked like nowadays and she saw me and actually ducked out of the picture - even threw up a hand to cover her face! Hilarious! haha! She totally big timed me, like "You're not going to snap a picture of me without paying first."

Look, I get that you are there to make money, but cmon - It's not like I was taking a picture to resell or anything. Ridiculous and not a way to win fans. 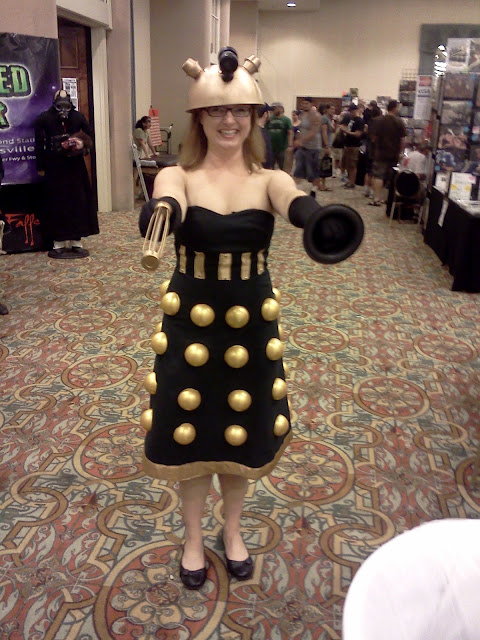 I just had to take a picture of this costume as it was super cute! Unlike Caroline, this girl had no problem posing for me. 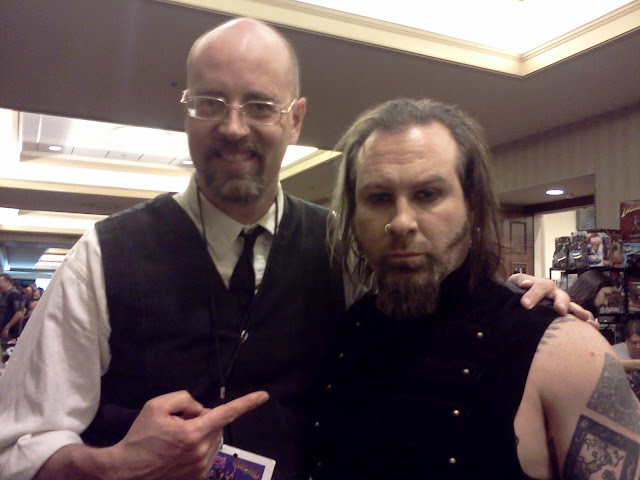 Finally, Glenn Hetrick, makeup artist and judge of the TVshow Face-Off was walking by my booth and we talked a bit about the upcoming season. He was a nice guy very willing to take a photo with me (take note, Caroline). They just wrapped season 3 of Face Off so look for that soon on the SyFy channel!

Overall it was a fun weekend and I really enjoyed it. Met some new friends, got to hang out with some old ones, and discovered a kick ass new drive-in. I will try and make it back next year if possible. To find out more about Fright Night, visit: http://frightnightfilmfest.com/

To find out more about the Georgetown drive-in visit: http://www.georgetowndrivein.com/