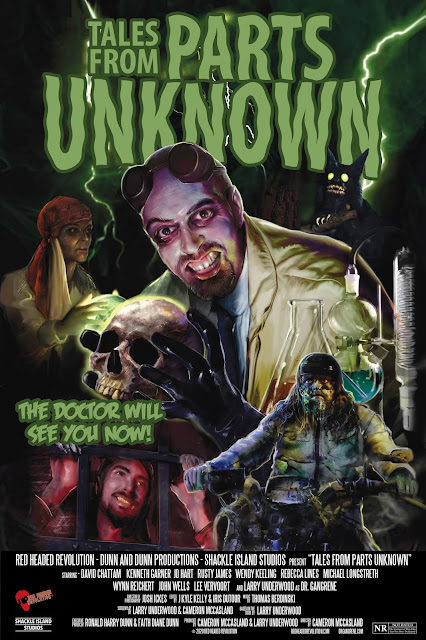 Tales from Parts Unknown is a feature-length anthology film presenting four tales of terror directed by Cameron McCasland and hosted by the Physician of Fright, Dr. Gangrene (Nashville, TN horror host Dr. Gangrene, played by Larry Underwood). The pair share the writing credits on the screenplay with the title of the film derived from Underwood's short story collection of the same name, in which one of the stories originated.

Underwood & McCasland are bringing their long-standing brand of horror to the drive-in screens for the first time after multiple collaborations on television including the Emmy nominated Green with Dr. Gangrene PSA series, the half-hour Dr. Gangrene Presents, the made for TV movieThe Dreadful Hallowgreen Special, and the freshly produced Dr. Gangrene’s Cinetarium, which currently is airing its second season on the NECAT Network.

Two of the stories, Tailypo and The Prisoner of Perdition, toured film festivals, racking up over 50 awards and nominations including the Rondo Hatton Classic Horror Award for Best Short Film and an Emmy nomination. They are presented along with two never before seen shorts (Retrieval Service and The Rider) and a wrap-around story.

Tales from Parts Unknown will premiere during the Creepy Cruise-In at the Georgetown Drive-in in Georgetown, Indiana on October 3rd, and select drive-ins and special engagements in the following weeks. The event will be hosted by Dr. Gangrene in person with a classic car show and giveaways. For more information check out drgangrene.com