I finally watched HALLOWEEN KILLS this weekend. I initially planned to see it in the theater, but my schedule didn't allow it, so I finally relented and signed up for Peacock streaming and watched it at my house. I have mixed feelings about seeing movies this way. I'm a big supporter of theaters, but the past several times I've gone to see a movie anywhere outside of the Belcourt (Nashville's arthouse theater that doesn't allow talking or disruptions of any kind) the experience has been HORRIBLE. Audiences are so badly behaved nowadays that it ruins the entire experience. But I'll save my old man rant for another day - today I'm here to talk about Halloween Kills. 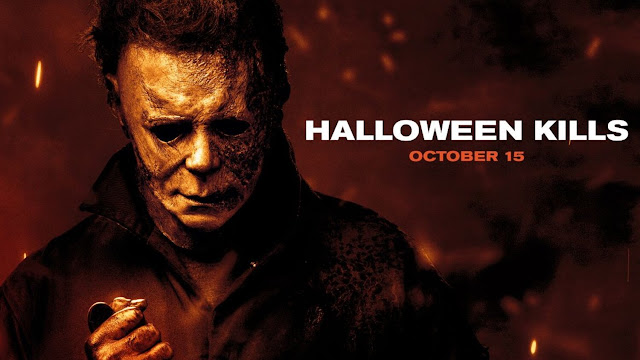 Spooky season is here and Michael Myers is back, stalking his way into theaters once again. I had heard there were a lot of folks upset about this latest installment in the franchise, and it was people posting spoilers online that finally made me go ahead and watch it at home. Admittedly, I wasn't the biggest fan of this team's first effort, HALLOWEEN 2018. I didn't hate it, I just kind of had a problem accepting the premise of it, to be honest. You see, there's just an inherent arrogance built into any filmmaker who takes an established franchise like Halloween and throws out all the sequels, proclaiming them trash and that theirs will be the only "real" storyline going forward. ESPECIALLY if they're not including one of the very best films in the franchise, HALLOWEEN 2, which I'm a big fan of. It's the second-best "Michael" movie, after the Carpenter original. It picks up immediately following the first film, builds on the events of that film, and tells a compelling story. It was also written by the man himself, John Carpenter, in conjunction with his creative partner Debra Hill, in 1981, just 3 years after the original, when the story was still fresh.

The new creative team (David Gordon Green, Danny McBride and Jason Blum) have gone on record saying the main reason for ignoring part 2 (and all subsequent films) is so Michael and Laurie would no longer be siblings. Not sure why they chose to discard this particular bit of lore, as it's one of the most well-known parts of the story. But they did, and it was a bit hard for me to accept that in the 2018 film. ESPECIALLY since that exact thing had already been done once, with HALLOWEEN H20 (1998). That one also chose to discard all the sequels, setting its story directly following the original 1978 HALLOWEEN. And here's the kicker - it did it better than the 2018 version. 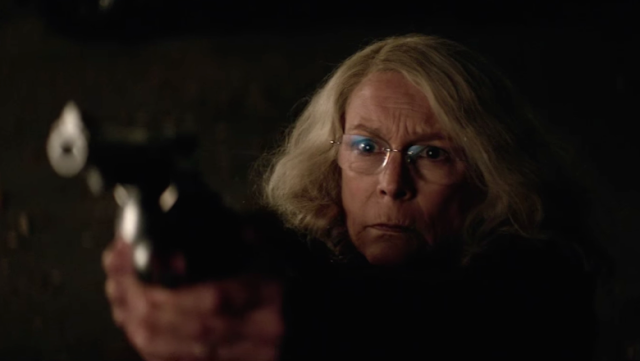 In 2018 the biggest problem was the way they wrote Laurie. They were trying to portray her as a strong woman character, but instead, she comes across as a fearful loon, afraid of her own shadow and hiding in the woods with her guns. You know what's strong? Learning to cope with trauma, beating your fears, and being able to live a semi-normal life after the fact, even becoming headmistress of a school and raising a son. Hiding in fear isn't strong, conquering that shit and living life takes real strength!

So I found the 2018 version less than compelling for a number of reasons. BUT, I decided to put that aside and give the latest film, Halloween Kills, a fair chance - even if it is a terrible title. And it is. I mean... Halloween Kills? That's the best they could come up with? About as bad as FEAR THE WALKING DEAD, another really lame title for a spinoff property. 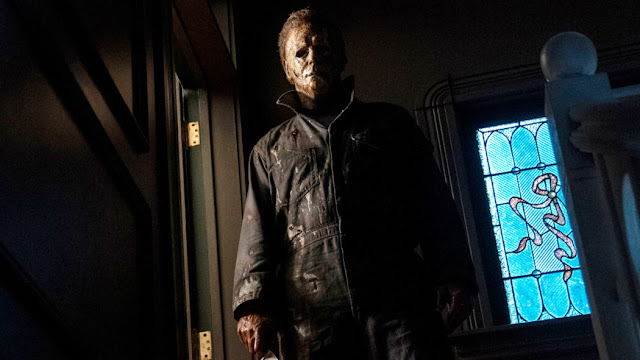 So how was this latest horror-holiday offering?

After seeing it, I'm really not sure what people were all that upset about online. This one takes place immediately following Halloween 2018 (in much the same way that Halloween 2 followed the original film). A large portion of it takes place in the Haddonfield hospital (again, much like Halloween 2). Halloween Kills was better than 2018 however, largely because Laurie is out of her cliché Sarah Connor mode this time around. She is injured in the hospital from wounds received in the prior film, and confined to her hospital bed for the most part. Her character is much better written this time around, showing some warmth and compassion with an old friend in her hospital room, as well as genuine concern for her family.

This one does get a bit convoluted story-wise by introducing a whole bunch of characters with ties to the 78 film. Probably a few too many, at least I had trouble keeping up with all of them. But that aside, the story was engaging and it felt more like a proper Halloween film this time around. There was even a nod to HALLOWEEN 3 in it, but I'm honestly not sure if it's supposed to be an homage or a middle finger to that oddball outlier of the franchise. But people can watch and decide for themselves, I suppose. Probably a better question for the filmmakers. 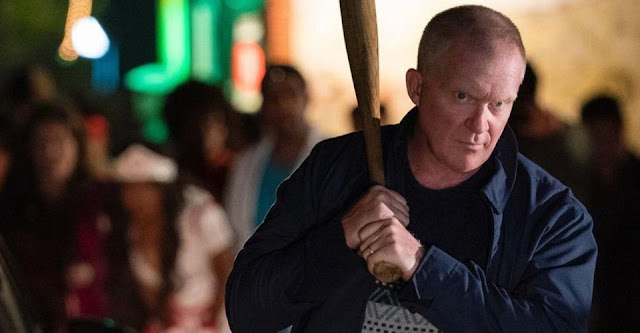 There's also an angry mob portion of the film that - you know, now that I think about it, a lot of the film is taken up with this storyline. Maybe that's what people disliked so intently. I was fine with it though, as it's at least something new that we haven't seen in any of the Halloween films before. I think it's good for the franchise to go somewhere new. That's what a sequel should do, not just remake the same film time and again.

There was a portion toward the end where Michael confronts the mob that kind of bugged me, cinematography/editing-wise, with them shooting it in slow motion, in kind of isolated shots highlighting specific kills, instead of letting us really see the action play out in real-time and revel in it. Makes me think of that amazing ending in CABIN IN THE WOODS when all hell breaks loose and the camera stays right on the action, pulled back so you can really see it in all its glory. I'd have preferred that here, but they got artsy with it, which is okay,I guess, it just lost some of its power that way, which is the complete opposite of what they were going for, I think. 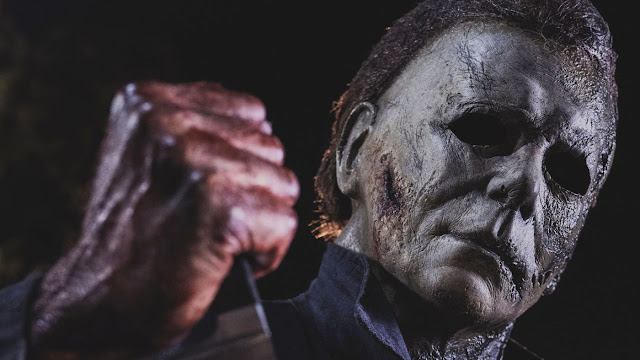 So... is Halloween Kills a trick or a treat?

Overall, those gripes aside, I found this to be a bit of a mixed bag. The film is enjoyable, much more so than Halloween 2018, and I will probably re-watch it sometime, which I'm not sure I'd say for the 2018 version. I do wish the trailer for Halloween Kills hadn't given away so much of the story ahead of time. For the next chapter, the supposedly final one in this team's run (I think) titled HALLOWEEN ENDS (Really? Again, best you can come up with?), please, PLEASE - use some restraint on the trailer. Really. You don't have to give away major chunks of plot in the trailer. Study some classic trailers. There's an art to effectively teasing the action and intriguing audiences yet not giving away the story. You can do it, I have faith in you.