The beginning of the end. I renounce the Dolphins.

This is a cathartic post. It has nothing to do with horror, Dr. Gangrene or any related items. I write this for my own good. I write this because I have to. I write this as a lifelong Miami Dolphins football fan who is fed up. I refuse to support them any further. 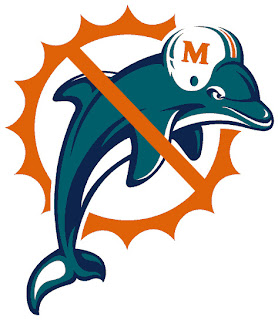 My love of the Miami Dolphins began when I was a kid. There was no professional football team in Nashville TN in the 70s, and I chose Miami as my team. Just why I chose them originally is a bit of a mystery, but I remember I liked their colors and loved the mammals they were named for. The fact they were on TV often probably helped, too. Then in 1977 something happened that made me an even bigger fan.
I was 11 years old and in the 5th grade. I began having problems reading the chalkboard at school. I went to the eye doctor and, yep, you guessed it, was prescribed glasses. It was traumatic, and I hated it. Kids teased me. Already tall and skinny I now also became 4-eyes. You know the routine. But in 1977 Bob Griese, the quarterback of the Miami Dolphins, also began wearing glasses under his helmet in games! Wow! If the quarterback of my favorite football team could wear glasses and still play, it must not be so bad. It made my own situation seem much more palatable.
I became friends with a guy name Kevin Alexander who worked at the library two doors up from my Grandmother’s house, where I stayed after school. Kevin was a huge Dolphins fan, and we naturally clicked. He helped me look up Bob Griese’s home address, and I sent him a letter. I eventually forgot all about it until one day the following summer I received an autographed postcard back from Mr. Griese. Talk about making a kid’s day.
I remained a fan through high school and college, which I graduated from in 1989. But the 1990s rolled around, and that is when the beginning of the end for this once proud franchise began. I present the Timeline of Shame for the Dolphins.
Jan 7, 1990. Owner Joe Robbie passes away. This is more sad than shameful, but was the trigger for the chain of events that followed. Joe Robbie built the Miami Dolphins stadium, Joe Robbie Stadium, with PRIVATE FUNDS in 1987. It was named Joe Robbie Stadium.
Wayne Huizinga buys 15% of team from the Joe Robbie Family.

1996 - Jimmy Johnson named head coach. He changes the team's logo, alters the colors, and add a mascot, something they had never had before (and never needed).

Jan 3, 2007 - Saban resigns and becomes head coach for Alabama. Saban had told fans and media for weeks there was no truth to rumors he was interested in Alabama job. After boldface LYING to everyone, he accepts job in Louisiana and quits Dolphins.

Jan 6, 2011 - New owner Ross and team president Jeff Ireland fly to SF to offer the largest contract in history to Jim Harbaugh to become head coach. Harbaugh, who has never held an NFL head coach position, rebukes them. Meanwhile they keep Tony Sparano on staff, twisting in the wind, and later announce he will be retained as head coach.
Jan 7, 2011 - I hereby renounce allegiance to the Dolphins. I'm done. I am tired of the painfully embarrassing series of poor decisions this franchise has made for the past 15 years. I can’t support them any longer. Their current poor treatment of Coach Tony Sparano, who I like and feel is a good coach and person, is the final straw. Nashville has a professional football team now, something they never had while I was growing up. I remember very clearly a conversation I had with my brother and step brothers outside one day at our old house. We were sitting on our bikes in the driveway talking football. We all agreed that Nashville would never have a pro football team.

Well we were wrong and now they do have a team. With the latest move of releasing QB Vince Young, I am even more of a Titans fan. Vince is a quitter and a crybaby, qualities you can’t have in a leader . With every bad apple the Titans cut, from Haynesworth to Packman Jones to Vince Young, I like them better.

So I’ll be wearing Titans blue for now on. I’m giving all my Dolphins gear to Goodwill tonight. Gonna pack up my jerseys and jackets and memorabilia (aside from my Bob Griese postcard) and toss em out to folks who can stomach the distasteful antics down south.