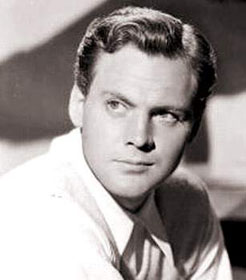 
John Agar is, without a doubt, one of my very favorite actors. He had that swinging 50’s action-hero vibe going, and if events had been different he would have been one of Hollywood’s biggest stars. Well documented drinking issues and a difficult divorce from America’s sweetheart, Shirley Temple, practically blacklisted John and prevented him from working on “A” list films. Alcoholism was a common problem in those days, and one that many actors and actresses dealt with. In fact, here’s a quote from John on the subject, “Heck, I drank no more than John Wayne or Ward Bond or Spencer Tracy or Alan Ladd or Robert Walker. But it got me into a lot more trouble.”

But despite these issues John always turned in a top notch performance. In many of the low budget films John made in the fifties and sixties he was often the best, if not only, good thing going for that film.

In 1949 John appeared in both “She Wore a Yellow Ribbon” and “Sands of Iowa Jima” alongside actor John Wayne. In 1950 John and Shirley were divorced, and suddenly the choice roles seemed to disappear. He found work, however, in a number of westerns and low budget pictures such as The Magic Carpet, The Rocket Man, and The Golden Mistress.

1955 saw a bit of a renaissance for John as Universal Studios cast him in a pair of Science Fiction films that would go on to be classics in the field, “Tarantula,” and “Revenge of the Creature.” After that John became somewhat typecast as a science fiction guy, and appeared in a string of increasingly low budget science fiction films, pretty much bottoming out in 1966 when he starred in two Larry Buchanan films, “Zontar, The Thing from Venus,” and “Curse of the Swamp Creature.”

In 1976 he appeared in the Dino De Laurentiis remake of King Kong, playing the mayor of New York City. In the 1990s he appeared in a number of cameo roles, including “Nightbreed” by Clive Barker and “Body Bages” by John Carpenter.

John passed away April 7th, 2002. He made close to one hundred films in his career, and is beloved in the science fiction community.

I’m declaring this week to be John Agar week here on this blog, and will be posting about him all week long. Here’s to you John - Here's a little music video I put together for the Dead Elvi Song, John Agar Rules...