ABCs of Death - M is for mixed bag. 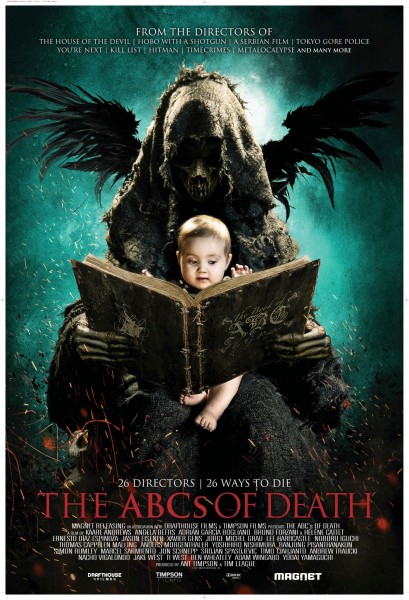 I just watched the ABCs of Death, an anthology of 26 short films, each based around a different letter of the alphabet. Good premise for the anthology, and while I thought it was better than another recent horror anthology, VHS, I still found much more bad than good in it. The preponderance of shorts based around toilets, shit, and bodily fluids really baffles me. Just trying to go for shocking, perhaps? How about telling a good story instead?

My favorite segment? U is for Unearthed, by Ben Wheatley. This guy is an interesting director. He made a film called SIGHTSEERS in 2012 that the Nashville Film Festival screened this year. It was one of the few films I wanted to go see, but unfortunately I went to the short films collection instead. Mistake. Should have opted for Sightseers.

So while I can't say I totally hated this film, I definitely can't recommend it very highly, either. It's a real mixed bag. 2 out of 5 skulls.
at Monday, July 08, 2013