I've been sitting on this interview for a couple of weeks now and been meaning to post it - this is the perfect opportunity, as, in light of some recent events,  it's nice to spotlight a woman in the horror field in a positive fashion - tonight's guest is one of the busiest women in the field and a super cool chick to boot...


Greetings Fright Fans!! I was first introduced to tonight's interviewee through the Rue Morgue Radio podcast, where she was a guest. She was discussing her book on the Sociology of Zombies in mass culture. Since then she has become involved in a number of other creative endeavors, so I thought I’d catch up with her and talk a little about what she’s been up to… Welcome Andrea “Lady Hellbat” Subissati.

Doc G - Hello Andrea! Great to speak with you! I see you’ve been really busy lately, with a number of creative irons in the fire, so to speak.

Andrea - No kidding! I never would have guessed there was so much a person could do with their love of the horror genre: from freelance journalism to lectures to podcasts. In the past few years I’ve become connected to so many talented and inspiring folks in the industry (including you, Doc!) and there’s no shortage of interesting things to do in horror!

Let’s start with your book, When There’s No More Room in Hell: The Sociology of the Living Dead (2010) - Tell me a little about it and how that whole topic came about.

I was working on my Masters degree in sociology in 2010 when the ‘new wave’ of zombie movies (like the Dawn of the Dead remake and 28 Days Later) were starting to mark a resurgence of the subgenre. As a horror fan and a sociologist, it was interesting to me that there were ‘trends’ in horror film. When I went to the school library, I found several books on the history of horror films and how they reflected societal anxieties of the time. There were lots of books on vampires, aliens and monsters but strangely, not a whole lot on zombies. There were great books out there, of course (Kim Paffenroth’s Gospel of the Dead was an invaluable resource in particular) but there wasn’t much formal academia on the subject. I took this as an opportunity and decided to write my thesis on why zombies were so popular in the 70s and why they appeared to be making a comeback.

What has been the reception of it now that it’s in book format?

I went with an academic publisher because I suspected that as the genre grew in popularity, more and more schools would be offering courses on the topic and would be interested in stocking my book in their libraries. The downside of that decision is that the book is rather expensive and it reads like an academic dissertation. I’ve sold quite a few copies at my book launch party and at my Black Museum lecture, but When There’s No More Room in Hell isn’t the kind of book you’re going to find on the shelves at your local Chapters.

I thought about rewriting it for a wider audience but by the time I was ready, a zillion books on zombie culture had sprung up and I was eager to move on to other topics. I do still love doing research and writing academic essays. I contributed a chapter on Hellraiser to a book called The Undead & Theology which was nominated for a Stoker award this year, and I’m always on the lookout for more projects within academia.

Tell me about your latest endeavor, THE FACULTY OF HORROR. I find it interesting to hear a female perspective on movies that exist within a heavily male dominated genre. Have you enjoyed stepping into the world of podcasting? 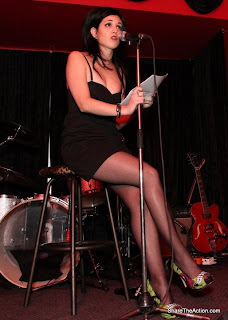 Have I ever! The Faculty of Horror podcast was largely the brainchild of my friend and co-host Alexandra West, who also writes for Rue Morgue, Famous Monsters and her blog, scare-tactic.blogspot.com. I love how podcasting gives me the opportunity to tackle smaller topics and bounce my ideas off someone else, especially a fellow female fan! Since we started the podcast last January, Alex and I have had the opportunity to network with several great horror/film podcasts (like The Projection Booth and 6ft+) and we’re thrilled to be making an appearance on a horror podcasting panel at the Rue Morgue Festival of Fear this summer.

I was also amazed at how easy and inexpensive it is to create a podcast. Really, all you need is the time and the inclination; you don’t need fancy software or equipment at all. I do spend hours editing and sourcing out clips, but we record The Faculty of Horror on freeware (a program called Audacity, if you’re interested) and a mic made for the Rock Band video game on PS3!

Tell me about THE BLACK MUSEUM lecture series.

The Black Museum was inspired by the Miskatonic Institute of Horror Studies out of Montreal. I became aware of the Miskatonic when I was a guest on the Rue Morgue Podcast about my book: Stuart “Feedback” Andrews was prepping to teach a course on zombies and he filmed my interview to use in his presentation. Feedback and I kept in touch, and toyed with the idea of starting something similar in Toronto. The same idea had occurred to Paul Corupe, another Rue Morgue scribe who also runs Canuxploitation.com. Feedback introduced us and between the three of us, the Black Museum was born!

The Black Museum has run two semesters now, and has welcomed the likes of Vincenzo Natali and Steven Kostanski of Astron-6 as guest instructors. Some of our most popular lectures were about horror posters, mad scientists and zombies, of course! We’re gearing up for semester 3 right now, and we’re looking forward to announcing a stellar fall lineup at the Rue Morgue Festival of Fear in August.

I sure have! I approached Rue Morgue to sponsor my book launch party and I’ve gotten to know them well since then. Rue Morgue has such a great staff who are truly committed to keeping on top of the genre and giving hardcore fans what they crave. They are the print authority on the subject and I feel very fortunate to live in the same city they’re based out of so I can attend their events and bug them for assignments!

Magazine journalism is a bit of a departure from the heavy academic writing I used to do, so I’ve really enjoyed the challenge of writing about different topics to appeal to different audiences. I think the variety has really strengthened my writing skills and expanded my knowledge of the genre. 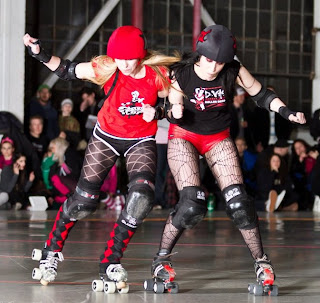 You are also heavily involved in roller derby. That’s where you got the Lady Hellbat moniker, I believe. Talk about that a bit and are you still in the ring nowadays?

The flat-track, you mean! Sadly, between a compound injury last year and increasing time constraints I’ve decided to hang up my skates. I’ve got so much on the go, I can no longer devote all the time and energy to the league that I used to, and it’s not the kind of thing you can do part-
time. I had a great time with it though; I was MVP for my first bout and I was even on a poster once! I consider myself a Gore-Gore Rollergirl for life and I wouldn’t part with those memories for anything.

So what’s next on your agenda? Any projects you’ve been dying to tackle that you haven’t tried yet? Another book in the works, perhaps?

Well, the Black Museum is slowly growing and we’ve talked about some strategies to expand our reach outside of Toronto. The Faculty of Horror keeps me busy, and I’ll be doing a mini-encore presentation of my Black Museum lecture called Unearthed: The Cultural History of the Zombie at the Festival of Fear this summer!

As for other literary projects, I could tell you… but then I’d have to eat your brains…
at Wednesday, July 17, 2013