In this episode of THE FANTASTIC FILMS OF VINCENT PRICE video series, your host Dr. Gangrene takes a look at the 1951 Film Noir/Romance/action picture, HIS KIND OF WOMAN, starring Robert Mitchum, Jane Russell, Raymond Burr, and Vincent Price. In it Price plays world-renowned actor Mark Cardigan, a hammy actor with a fondness for big game hunting. He is also having an affair with Jane Russel's character, and staying at a resort chock full of quirky characters. Enter Mitchum, a down and out gambler who was paid $50,000 to leave the US, no questions asked, and wait at the resort for further instructions. Turns out his benefactor was none other than infamous crime boss Ferraro (Raymond Burr), who plans to steal his identity and take his place, permanently, with the help of an ex-Nazi plastic surgeon...

This is an unusual film-noir with a star studded cast. Price's performance is a thing to behold, as it gradually increases in intensity throughout the film, ramping up the camp factor until, by the end, he is delivering a truly over-the-top, Shakespeare-spouting gun-toting performance! 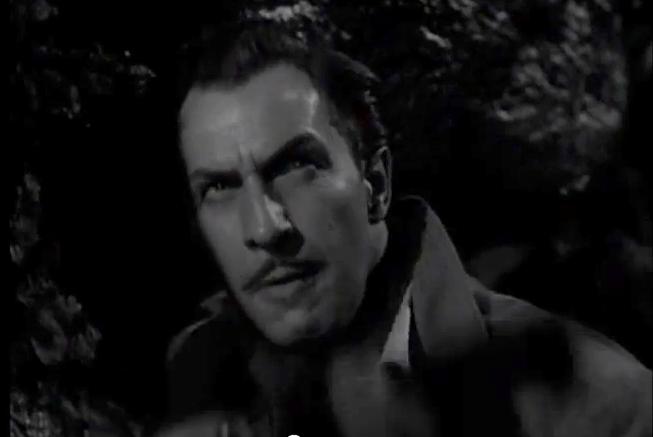 About this series:
Dr. Gangrene, Physician of Fright and Award-winning Nashville-based TV Horror Host (aka writer/film historian Larry Underwood) explores the films of the merchant of menace, Vincent Price, in chronological order from first to last, approaching them from a scholarly perspective, offering commentary, review and criticism.
at Thursday, March 12, 2015