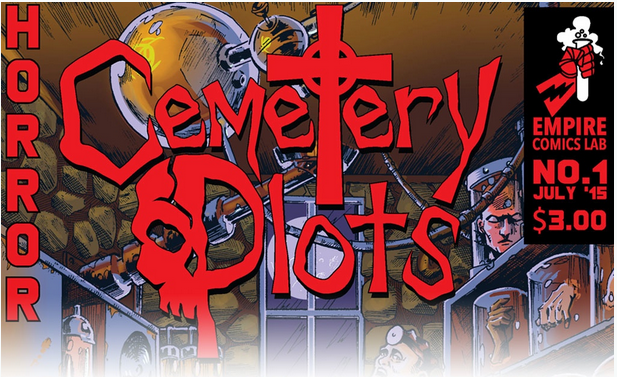 The comic book anthology Cemetery Plots produced by Dan Johnson, long-time friend and former writer for the Dr. Gangrene Creature Feature show, is planning a second issue. They have started a Kickstarter campaign, and I wanted to share with you ghouls. Check it out, it's got some great incentives, and any help would be appreciated!


Hello, kids! Dan Johnson, editor of Cemetery Plots here again. Week one of Empire Comics Lab’s Kickstarter has gone really well. Right now, 10% of the amount we need has been raised, but we still have a way to go to meet our final goal of $3,500.

I want to take a moment to remind you all that we’re holding a special ‘Thank You for Pledging’ drawing. If you pledge any amount to the Kickstarter between now and 11:59 PM Sunday, October 4, you will be put into a drawing for a signed first edition of Cemetery Plots #1 and a one-of-a-kind Thank You sketch of the book’s host, D.O. Mann, by ECL’s head honcho, Dave Hearn. Now, I do want to remind you all that we are sold out of first edition copies of Cemetery Plots #1. They are all gone except for a stash that I have for upcoming convention appearances. This drawing is going to be your last chance to get one for yourself. Also, the sketch that Dave is working on is going to be unique. There will not be another one like it offered at any time.
Also, I did want to take a moment to remind you all that pledging to the Kickstarter is a real bargain. For example, if you pledge just $3.00, you’ll get a copy of Cemetery Plots #1 when we go back and print the second edition, as well as a Thank You in an upcoming issue of the book. Now think about that. You’re going to get a heck of a horror comic book for a mere $3.00. Who else is offering a comic for that price these days? Some of the major publishes are talking about going as high as $5.00 PER BOOK. That’s insane! It’s almost as crazy as passing on a book that $2.00 cheaper. And heck, we’re even throwing in the cost of mailing it to you as well! Again, this is a bargain you can’t afford to pass up.
So! Give what you can and help us make our dream of making the best damn comic books a reality. Thank you.
at Saturday, October 03, 2015