We just released out latest PSA, a retro-style Halloween Safety short featuring kids in classic Halloween costumes. We are all really happy with how it turned out, and hope you all like it.

Shackle Island Studios and Red Headed Revolution Pictures have unveiled their newest Public Safety Film titled ‘Happy Halloween With Dr. Gangrene.’ The new short film features Larry Underwood as Dr. Gangrene listing a number of safety tips to pint sized trick-or-treaters. Check out the PSA below.
The safety film was written by Larry Underwood and directed by Cameron McCasland. It was filmed in Middle Tennessee and features McCasland’s young children Roxie & Marie McCasland as well as Jessica and Joseph Auguon Drake Jr. whom McCasland had previously worked with on other projects. The poster for the short was designed by J. Kyle Kelly at Villain Place in Nashville, TN. Kelly also shared shooting duties and editing on the project. The cartoon image of Dr. Gangrene is courtesy of artist Jeff Carlson. 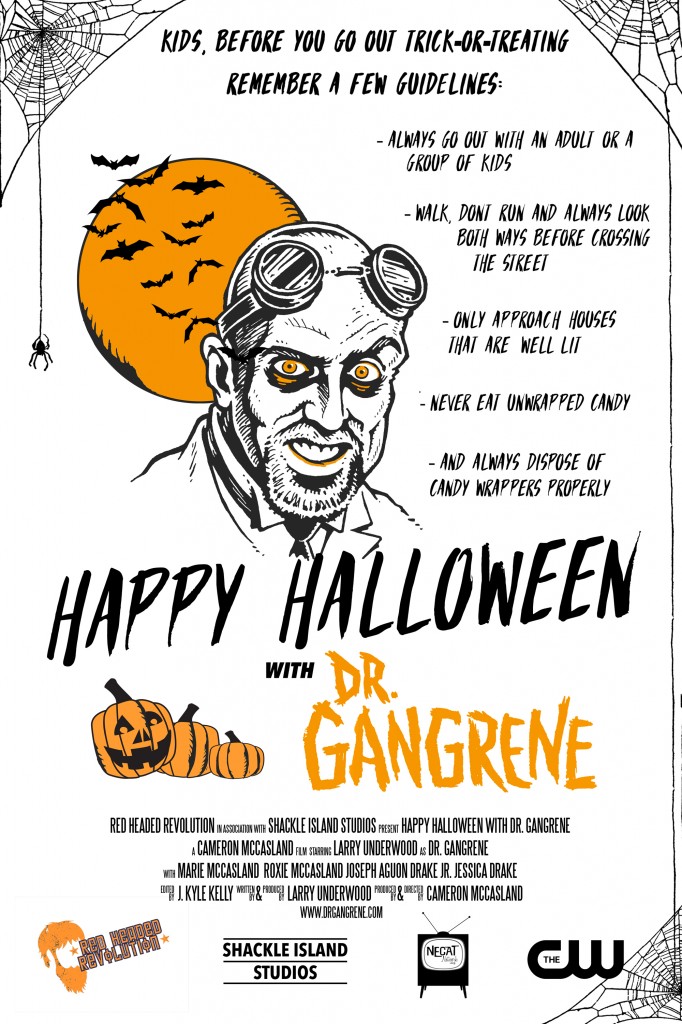 Underwood said of the project “Halloween is a magical time of year, and we want kids to have fun and be safe out there. You know what they say, an ounce of prevention is worth a pound of cure, or candy, as the case may be.”

2015 has been a banner year for the horror film making duo. Underwood’s Dr. Gangrene was inducted into the Horror Host Hall of Fame during Horrorhound Weekend in Cincinnati, Ohio. His new series ‘The Fantastic Films of Vincent Price‘ just completed its 44th episode, and he picked up his third Rondo Statuette this time for his ‘Tales From The Lab‘ blog.

McCasland was named Indie Director Of The Year at the 2015 Indieville TV Awards. His feature length slasher film ‘The Lashman’ was the recipient of a Matchflick Flicker Award for Best Throwback film. His newly released short film Tailypo recently picked up honors at the Imaginarium Film Festival. And he has also picked up hardware for his video producing work on several music industry related projects including a Communicator award for his documentary ‘I Heard The Devil Say My Name Out Loud’.

This new public safety film follows in a long line of shorts from collaborators McCasland & Underwood. Their ‘Go Green With Dr. Gangrene’ series ran for several years and received praise from the governor of Tennessee and the Nashville City Council. It also garnered national attention, picking up awards from the AEGIS awards, Ava Awards, MarCom Awards, Blingy Awards, The Accolade Competition, The DV Awards, a Public Service award from the Rondo Hatton Classic Horror Awards, and four Emmy nominations from the Midsouth Chapter of the National Television Academy of Arts & Sciences.

‘Happy Halloween With Dr. Gangrene‘ will air on The CW network as well as the NECAT network locally in Nashville, which currently airs re-reruns of the television program Dr. Gangrene Presents. It will also be screening at a number of Halloween themed events in October hosted by Dr. Gangrene, These include the rock n’ roll extravaganza ‘Dr. Gangrene’s Horror Hootenanny.’ A long standing tradition in Nashville now in its twelfth year. You can also catch it on the big screen, and under the stars, at the Franklin Drive-In in Franklin, KY for a terrifying triple feature of A Nightmare on Elm Street, The Goonies, and McCasland’s Tailypo. Tailypo will also be screening this October at Chattanooga’s Frightening Ass Film Fest and in Nashville at the Yazoo brewery with ‘Cabin In The Woods’ for Monster Sundays presented by Something About Zombies.

In addition to this new short film, Underwood & McCasland are helping fans celebrate Halloween by making their 2010 Emmy nominated made for television movie ‘The Dreadful Hallowgreen Special‘ available to stream for free during the month of October on the Dr. Gangrene YouTube channel. The half hour comedy also features New England’s Penny Dreadful and the legendary Count Gore DeVol. Fans of the show will also find a number of other classic episodes and special content available for the Halloween season.

Larry Underwood has portrayed horror host Dr. Gangrene in Nashville since 1999. He follows a long tradition of horror hosts in Music City including Russ McCown as Sir Cecil Creape and Ken Bramming as Dr. Lucifer. In addition to his duties as a television mad scientist he has a regular column in Scary Monsters Magazine and has published a number of short stories, comic books, and articles for various publications.