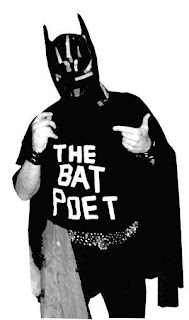 Doc Gangrene was mentioned in the Nashville Scene newspaper today in an article about the Batpoet telethon that took place at the CH19 studio last Saturday evening. The article was written by the one and only Jim Ridley - Doc G. is mentioned several times throughout the article, most especially here:

"If you mention 19 to someone, they go, 'You mean The Bat Poet Channel?', " says Larry Underwood, who, as horror host Dr. Gangrene, is regarded with awe by fellow Channel 19 vets for landing a Saturday-afternoon slot on The CW—the equivalent of a sandlot player getting called to the bigs.

here's the link to the entire story on the Nashville Scene website...

By the way, Jim modestly refers to himself here:

the only "civic luminary" the show could dredge up was a visiting drudge from the Scene.

Well, that dredge was Jim himself, who was the highlight of the evening in a rant about why the batpoet should return to the airwaves and what has happened to the streets of Nashville in his absence. Hilarious stuff, Jim!!
at Wednesday, December 03, 2008