There's Triffids among us! 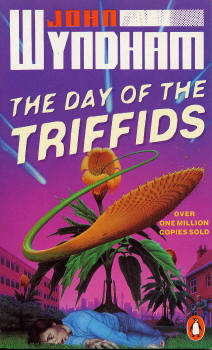 I just finished reading The Day of the Triffids by John Wyndham. It is a story about a spectacular meteor shower that rains over the earth, causing blindness in the inhabitants who watched it. The is also, simultaneously, a race of carnivorous plants called Triffids that seize upon the natural disaster and attack the now vunerable race of humans. The few remaining people with sight find themselves in a strange new world filled with threats not just from the Triffids but other humans as well.

I've seen the original movie version of this story, made in 1963 (though it's been a long time since I last watched it), but had never read the book until recently. It was really good, and now I plan to dig the movie out and give it another viewing for comparison. I understand the BBC aired a television version of the novel back in 1981 as well, and it's available on Amazon.com. It is supposed to be a pretty good adaptation, so I might just pick up a copy.

I also just read that a new Day of the Triffids series is being made for television, scheduled for a 2009 release. It is, again, a British production, and according to IMDB is supposed to air in August next year.

You know, all this talk about killer plants has me in the mood for some vegeterian food - think I'll go get me a big salad for lunch.
at Tuesday, December 30, 2008

Email ThisBlogThis!Share to TwitterShare to FacebookShare to Pinterest
Labels: Dr. Gangrene, The Day of the Triffids