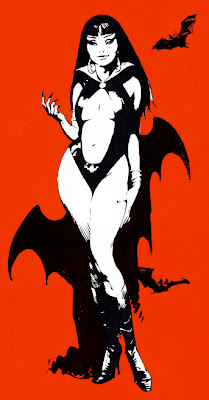 Posting about Forest J. Ackerman yesterday got me thinking about Vampirella, a character he created that starred in her own magazine through Warren Publishing.

Vampirella is best known as the scantily clad vampire comic book character, the alien bloodsucker who haunted magazine racks for over 100 issues. But for the first 7 issues of that magazine, Vampirella joined the ranks of the horror hosts.

The magazine was patterned after fellow Warren Publishing books Eerie and Creepy, and Vampirella hosted an anthology of horror stories each issue, much like Uncle Creepy and Cousin Eerie did in THEIR magazines. The difference, however, was that Vampirella also starred in one of these stories, too.

It wasn't until Archie Goodwin took over editing that Vampirella became a regular headlining character, starting with issue 8. From that point on she starred in the magazine with feature length stories rather than hosting multiple short stories. 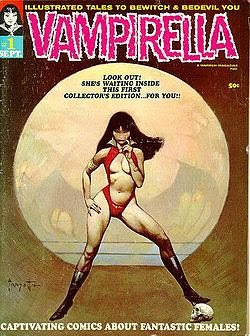 So here's to a little remembered Horror Host - Vampirella.
at Thursday, December 11, 2008