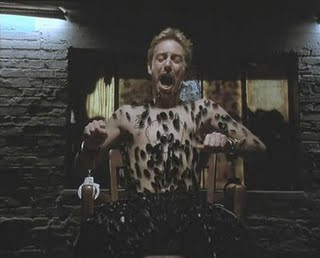 This past Saturday wrapped up this season's Creature Feature Halloween lineup. The movie was "They Crawl" and hoo-boy, what a stinker. Genetically mutated killer cockroaches that terrorize a city and eventually all form together into one giant cockroach that chases our heroes... unfortunately it really isn't anywhere near as cool as that sounds.

The CGI reminds me of how good movies are that don't rely on computer effects. In the old days they would have had real live critters - see "Frogs" for a good example of this, or, better yet, "Creepshow" - that one is another roach movie done right. "They Crawl" was made in 2001, so it really has no excuse - special effects and computer generation had come so far by this point that they should have much more realistic bugs than this. The scene from the the picture above, in particular, was probably the worst of the film – this guy is strapped down and the insects released on him to feed. It is just really, really poorly done.

We had fun with it and I think it made for a nice Halloween afternoon Creature Feature. Here’s hoping you all had a terror-ific Halloween. Boo!
at Monday, November 02, 2009