Alice Cooper in Hall of Fame

The Rock and Roll Hall of Fame announced yesterday that Alice Cooper is among the latest inductees. All I can say is – about Damn Time!

Alice Cooper is probably the person who is my single greatest influence, both in my career as a horror host and a singer in a horror band. I first discovered Alice when I stumbled across a box of cassette tapes of my uncles. They were tucked away in an upstairs closet at my grandmother’s house, and at the time I didn’t know Alice Cooper from Alice in Wonderland, but something made me give them a listen. 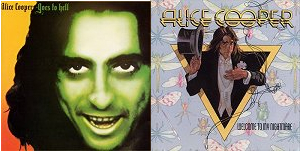 The two Alice tapes he had were Goes to Hell and Welcome to my Nightmare… my world was changed. I had never heard anything so cool in my life! This guy was singing about spiders, and death and necrophilia and he even had Vincent Price on his record!! I wore those tapes out and started buying every Cooper album I could get my hands on. By the time I was in college I had them all, from Easy Action and Pretties for You all the way through Da Da and Special Forces to the newly released Constrictor.

Constrictor was Alice’s big comeback album, where he returned to his horror roots. He toured that year and came to Nashville and I was right there front of the stage digging it. The tour was called the "Nightmare Returns Tour" and I have some great photos from that show, and thought this a good time to share them... 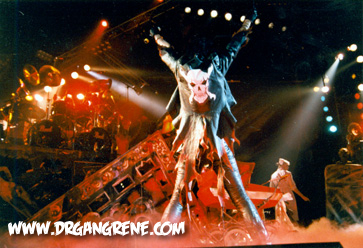 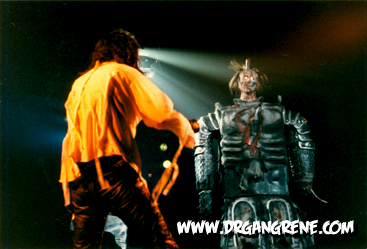 Alice's Teenage Frankenstein.
He actually put this monster together via an old magician's trick. He had a series of empty boxes he showed to the audience. He stacked them up on top of one another, stuck an arm on one side, then the other, a head on top, then the thing got up and waled around while he sang Teenage Frankenstein. When the song was over he kicked the monster over and they were just empty boxes again. Sweet! 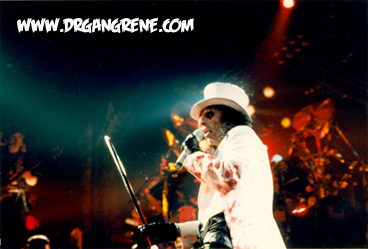 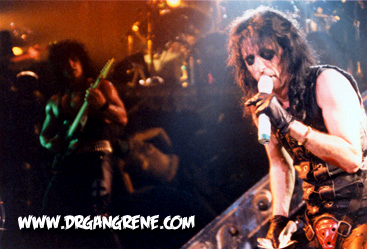 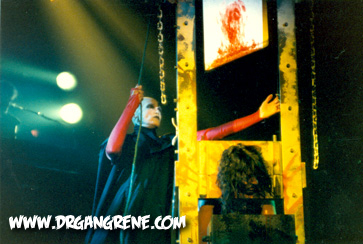 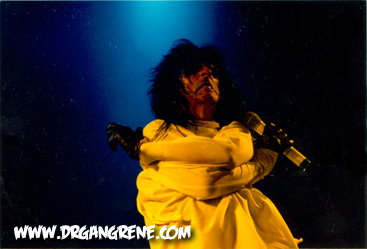 Not sure what he was singing here - perhaps Sick Things. 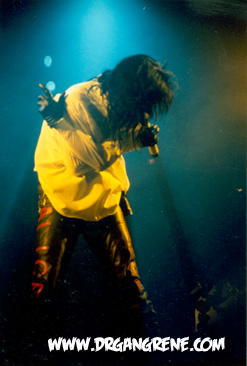 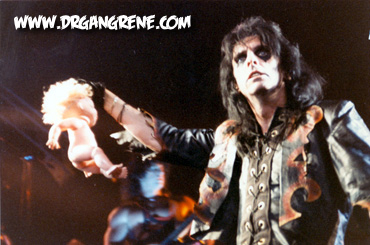 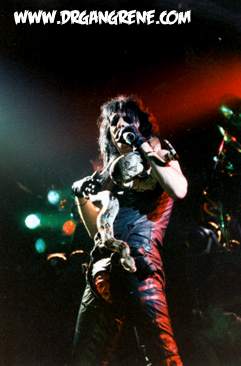 If you are touring for an album called Constrictor you gotta have a boa! 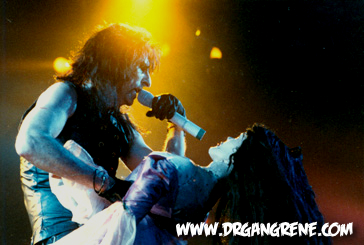 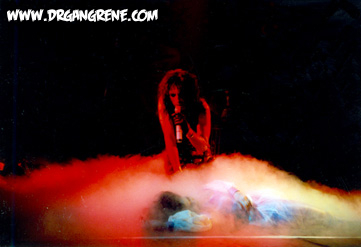 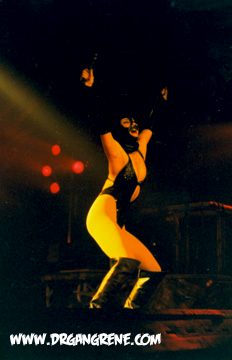 Stage dancer who shook her money maker - and helped torture Alice.
I think she came out during the song Go to Hell.
According to the Alice Cooper website the date of the show was Jan 2, 1986 at the Municipal Auditorium. I remember the opening band was the Vinnie Vincent Invasion. They were terrible! The songs they did, again according to the website...

I remember I dressed as Alice one Halloween in college – I have a picture somewhere and if I find it I’ll post it too. I took my youngest son to see Alice twice this year on the Gruesome Twosome tour with Rob Zombie. You can imagine my pride when we walked up to the merch table and I told Luke he could pick one tshirt – so he had to choose between Rob or Alice – and he chose Alice. That’s my boy!

I’ve been hosting horror movies for a dozen years now, wearing costumes and makeup much like Alice, and I even sing in my own shock rock band now, so I feel the Alice influence has come full circle. I really hope to get to meet him one day and shake his hand and just say thanks for everything. Alice is a one of a kind, a true innovator and a worthy addition to the Hall of Fame.

Email ThisBlogThis!Share to TwitterShare to FacebookShare to Pinterest
Labels: Alice Cooper, constrictor, go to hell, hall of fame, the nightmare returns, welcome to my nightmare