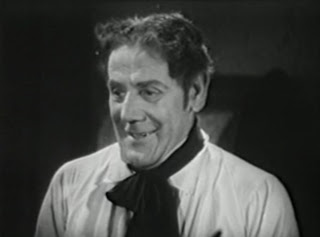 This week something special is happening. Yes I know its Christmas week, and I am very much looking forward to the howliday – but that isn’t what I’m talking about. I’m talking about the Tod Slaughter Blogathon that is going on all week long, spearheaded by Joe Monster over at the From Beyond Depraved blog!

All week long bloggers all across the cybersphere will be writing about Tod Slaughter. What’s that? You’ve no idea who Tod Slaughter is? Well that’s okay, you’re in the majority. Nowadays not many people remember Tod Slaughter – but back in the 30’s and 40’s in jolly old England Tod Slaughter was a well known horror movie actor. He did some stage work before finding his true calling in cinema, and one of his earliest and perhaps best known roles is that of Sweeney Todd in SWEENEY TODD: THE DEMON BARBER OF FLEET STREET.

This movie was made in 1936, 71 years before Johnny Depp and Tim Burton would put out that musical monstrosity based on the same character.  Sweeney Todd is the tale of a barber by the same name who gave his customers a shave that was a little too close for comfort - he would murder them for their money, or “polish them off,” as he was apt to put it. He disposed of the bodies with the help of his accomplice, Mrs. Lovett, who would bake their bodies into meat pies and sell them to the unsuspecting public in her pie shop! The businesses of these partners in crime and cannibalism were attached by means of a shared basement, again unknown to the public. 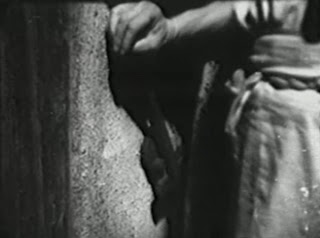 This movie is actually based an old English folk tale that dates back to the early 1800s. There is some debate whether it is a true story or folklore – I like to believe it is indeed based on fact. In the Tod Slaughter movie, he invites wealthy clients into his barber shop for a shave and a haircut. Oftentimes he singles out weary sailors just returning from months long voyages at sea, their pockets brimming with their newly gained pay. He would seat them in the barber’s chair, lather them up for a close shave before “polishing them off.” What happened next was Sweeney would throw a hidden lever and the chair, which was actually located on a trap door, would flip over, dumping the unsuspecting victim into the basement. There the victim would crack his skull on the concrete below, and Todd would follow them down with a straight razor and slit their throats for good measure.

Them Mrs. Lovett would take over, baking their remains into meat pies and burning the bodies in a large oven to dispose of the evidence. In the film version the cannibalistic overtures are severely toned down and merely hinted at: after all, this was 1936, and this is some pretty gruesome subject matter we're talking about. Sweeney Todd is a sneaky cuss though, and he cheats his business partner at every opportunity, hoarding away jewels and cash before she knows about it. 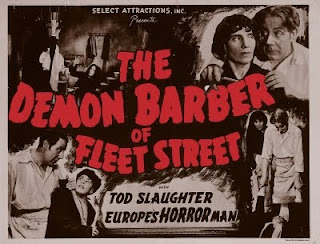 Todd Slaughter plays the role with gusto, bringing a real maniacal zeal to the part of Sweeney Todd. His diabolical laugh, charming smile, and over the top delivery make for a rollicking good time. It is easy to see why Slaughter became popular. He would go on to make a number of successful horror movies including The Crimes of Stephen Hawke, The Face at the Window, and Crimes at the Dark House. But it is his portrayal of Sweeney Todd that he is best remembered for - definitely one worth seeing. Here's to Tod Slaughter, the grand old maniac of British cinema!

And for a final treat - here's the entire movie, SWEENEY TODD THE DEMON BARBER OF FLEET STREET - Scary Christmas!!