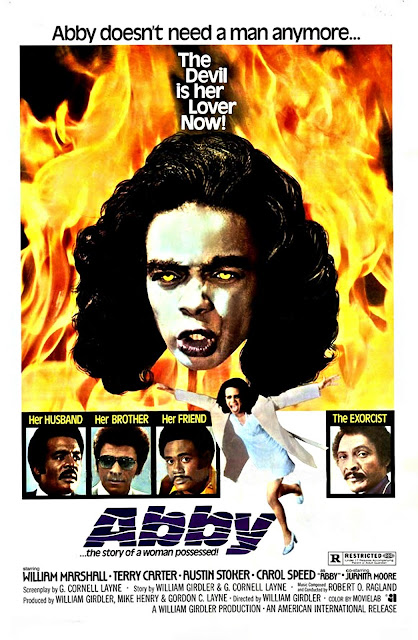 One of the films we're showing this weekend at the Belcourt Theater 12 Hours of Terror film festival is the 1974 film ABBY. Shot entirely in Louisville, KY, Abby was made by director William Girdler. It is a blackploistation take off of the film The Exorcist, unashamedly cashing in on the success of that movie. It stars William Marshall (Blackula) and Carol Speed as the demon possessed victim. This time, however, the victim is an adult and the demon is an African sex demon, so as you can imagine  much humpin ensues.

William Girdler had a short but prolific career as a director. He made 9 films in 6 years, making such "classics" as Abby, Three on a Meathook, Asylum of Satan, Grizzly, and his last, Manitou. Girdler died in a helicopter crash at the age of 30. It is a real shame as he was building an impressive catalog of films and earning larger budgets for his movies. It would have been interesting to see what he could do with a full Hollywood budget. Abby, however, was very much on the other end of the spectrum. Made for little money and shot quickly, it nevertheless is a fun 70s take on the exorcism motif. After its release Warner Brothers sued and had the film removed from circulation. Fortunately it survived and you can see it Sunday at the Belcourt Theater in Nashville.
at Friday, October 28, 2011