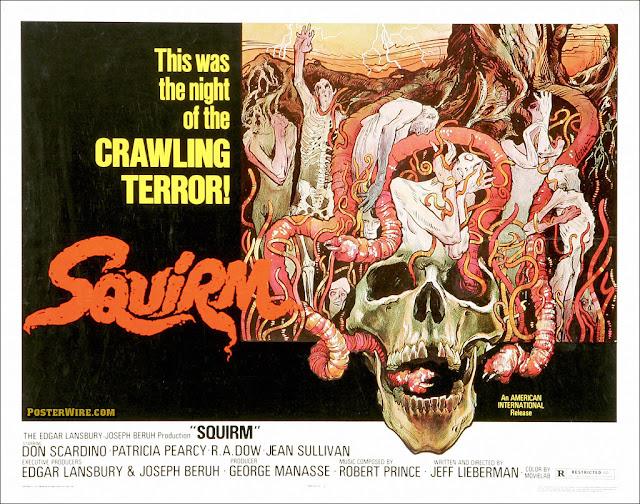 One of the slimier entries in the 12 Hours of Terror at the Belcourt theater this Sunday will be the 1976 nature run amuk, or worms run amuk more accurately, clas-sick SQUIRM! Filmed entirely on location in Port Wentworth, GA, it tells the story of a town besieged by electrified worms that bite, and burrow - under the skin of their victims, that is! There was a whole stream of nature attacks movies in the seventies, such as Frogs, Food of the Gods, Empire of the ants, Kingdom of the spiders, etc., and Squirm definitely falls into this category.

Squirm was the directorial debut of writer/director Jeff Leiberman. It stars Don Scardino and Patricia Pearcy, and gives a brief statement that it's based on a true story - but if you believe that, I have some real estate here on Shackle Island for sale... SQUIRM features some pretty killer makeup effects by Rick Baker.  Will definitely be fun to see in a crowded theater. Available on Netflix and DVD.
at Friday, October 28, 2011