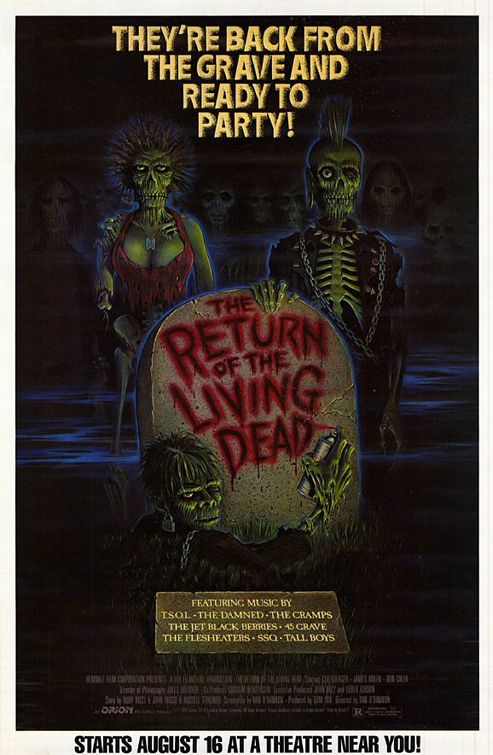 After Night Of The Living Dead creative partners John Russo and George Romero parted ways - Russo retained rights to the name "Living Dead," and continued making zombie films under that banner, while Romero continued his own series with "Dawn of the Dead." RETURN OF THE LIVING DEAD was the first film Russo made in what would be come a 5 film Living Dead series.

Return of the Living Dead injected more humor than Romero's original film, and also more gore. Originally Toby Hooper was slated to direct, but when he dropped out screenwriter Dan O'Bannon took over as director. Starring James Karen, Clu Gulager, Linnea Quigley, this is one of my favorite all time films. It isn't all schlock, however - the scene where the half-corpse zombie is chained to a table and questioned about what drives it to eat humans, particularly hum BRAINS, is creepy and effective.

With a punk rock music score and rock and roll attitude, this is one I've wanted to see on the big screen for years. Return of the Living Dead is the last movie shown at the Hellcourt 12 hours of Terror festival, and they definitely saved the most fun for last.

Email ThisBlogThis!Share to TwitterShare to FacebookShare to Pinterest
Labels: 12 hours of terror, belcourt theater, return of the living dead