Shame on you Nashville Film Fest

I've always been a big fan of the festival, from its humble Sinking Creek beginnings to its current “international” status. I try to support the Nashville Film Festival each year when it rolls around, and although I rarely get to see as many movies as I’d like, I nevertheless try and attend at least one or two screenings. The first thing I always do is search through the listings and see what horror offerings are on tap. The NFF website made it even easier this year by allowing you to sort by category. I looked under HORROR and the search turned up seven listings: Six features and a collection of shorts called GRAVEYARD SHORTS. I opted for the latter, as it was screening Saturday the 20th and I had that evening free. I figured it might be fun to see a collection of horror shorts and was looking forward to some creative, scary, and well-made short films. Here is the description of the short film block:

Graveyard Shorts - From the deeply disturbing, to the raucously silly; from spine-tingling chills to the mind-bendingly weird - this collection of shorts is one you won't soon forget.

Sounded intriguing. Well, for the most part it was a pretty interesting batch, some better than others. But about three quarters of the way through, a short “film” screened that turned my stomach. It made me angry, honestly, because it wasn’t a horror film and it had no business being in the festival to begin with. It was called Coco D. Nut and was a 3min music video of a squirrel puppet singing a moronic song about looking for a nut. It was made by Big Kenny. Now I had no idea who Big Kenny was before this, (because I don’t listen to country music), but have since found out he’s one half of the country music duo BIG AND RICH (the other half is the guy who built that god-awful eyesore on top of Love Circle). 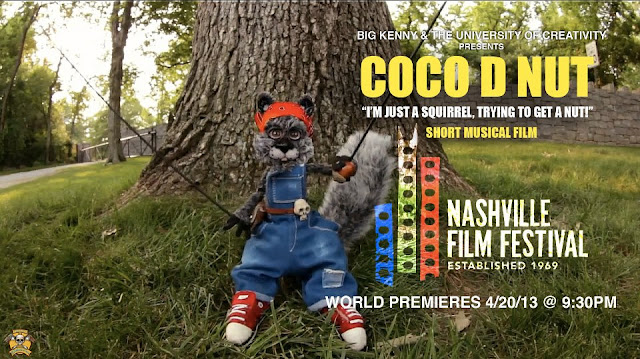 Here’s the thing. This was a well-produced video, technically speaking. But the music was, to put it bluntly, shit. It was embarrassing, complete with a “rapping” segment. My son looked at me and asked what the heck this was. It was obvious that this video was only in the festival because of who made it. The Nashville Film Festival has aspirations of greatness, wants to be on par with Sundance and Cannes – but as long as they pull this crap, kissing up to local “celebrities” and screening garbage like this, they’ll always be considered a second-rate festival. It is an embarrassment to Nashville that this was included in their film festival.

Most frustrating of all is the fact this took the spot of some deserving filmmaker. I’d love to see some of the shorts that were rejected in favor of Coco D. Nut. I am sure there were some real gems excluded in favor of this ridiculous pandering.

By the way, Big Kenny was in the audience, as was pointed out by NFF employees before the show – but he got up and left after his short screened. Guess he was too “big” to stick around and chat with people after the show.