SUCK - a film that doesn't 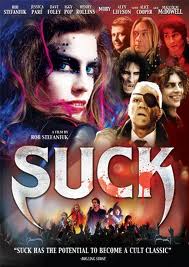 While playing a typical late night gig in a dive bar a strange, pale faced guy enters and makes his way toward the stage. This is Queeny, played by real life rocker Dimitri Coats. Dmitri has a really great look - wide face, piercing eyes, long curly hair - he makes one genuinely creepy vamp. He gains and maintains eye contact with Jennifer for the rest of the show, making her obviously self-conscious. Afterwards the two cozy up at a side table, oblivious to the rest of the world.


Meanwhile Joey is talking with band manager Jeff, played by Dave Foley. Jeff is a lousy excuse for a manager, honestly, and even tells them as much.  A sarcastic waitress brings the guys drinks, courtesy of the bartender, played by none other than rock legend Alice Cooper. The waitress is played by Calico Cooper, Alice’s real life daughter. Joey is stopped on his way out by the bartender, who gives him a bit of ominous, if somewhat vague, advice. 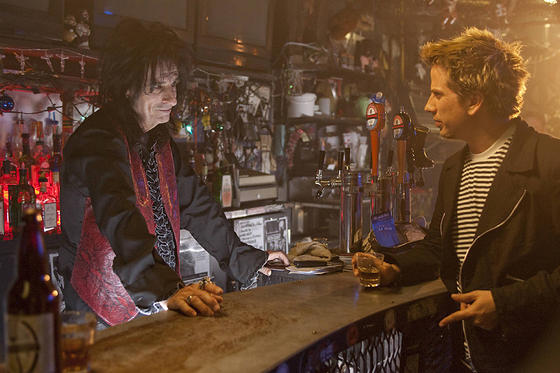 Jennifer tells the guys that rather than spend the night in a crowded hearse she’s going to a party with Queeny, and she’ll be back in the morning. Joey questions if that’s a good idea, since she doesn’t even know this guy. She ignores him, chalking it up to jealousy (they used to date) and heads off with Queeny. Joey’s concerns were justified, however, as we discover Queeny is a vampire, and his party is a gathering of bloodsuckers.

The next morning Jennifer is nowhere to be found. The band waits as long as possible, but finally has to hit the road. Fortunately Jennifer shows up just before show time, looking radiant. She informs them that she hitched a ride with the opening act, The Itchies. However, they just dropped her off and she doesn’t know where they disappeared to. There is a real glow about her, and Joey remarks that she somehow looks different. Onstage the crowd reacts positively to the band for the first time - but all their enthusiasm is directed toward Jennifer. 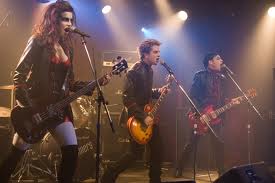 We later find out that she, in Hugo's words, "Ate the Itchies." You see, Hugo is the first person to discover Jennifer's little secret, but she charms him into not telling the rest of the band, instead serving as her own personal "Renfield." He helps dispose of the bodies of her victims in exchange for a promise to one day turn him into a vampire, too.

The band continues their tour across Canada and into the U.S. Along the way we follow their course on a map, animated with blood splatters rather than Indiana Jones-style dotted lines. These are punctuated with animated clips of a claymation hearse making its way from town to town. 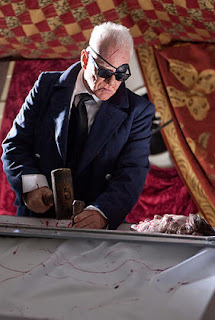 Meanwhile the band is being stalked from town to town by an eyepatch wearing vampire hunter Eddie Van Helsing (a name that immediately conjures up images of legendary guitarist Eddie Van Halen, appropriately enough), played by Malcolm McDowell.

There is a flashback sequence where we see Malcolm as a young man who loses his bride to be to a vampire. I was amazed at how good the footage of Malcolm looked, and wondered if they used  some kind of computer generated wizadry to make him look young in this scene. However, it turns out these were actually scenes from a 1973 film called "O Lucky Man" which were integrated seamlessly into the movie. It really looks as if they were made for Suck, so Kudos for the flashback sequence.

At the U.S. border they are stopped by a guard who thinks they look suspicious and makes them pull over and step inside. The coolest cameo of the movie (and I say that as a lifelong RUSH fan), this guard is played by none other than Rush guitarist Alex Lifeson. He asks if they have any drugs and they say no. The guard suddenly lights up when he hears they’re in a band, and he delivers my favorite line in the movie - “Oh, you’re a band eh? I used to be in a band. Played a little guitar…” A real tongue in cheek comment coming from a rock god like Alex Lifeson!

A few other rock idols make appearances in this movie. Moby plays Beef Bellows, front man of rival band The Secretaries of Steak, a band whose fans show their appreciation by throwing raw meat…

Henry Rollins plays Rockin’ Roger, a douche bag DJ who invites them to be guests on his program…

Iggy Pop plays Victor, a retired rock star turned record producer who owns a studio where they stop in to record a track. Victor recognizes Jennifer for what she is right off the, er, bat. He tells Joey this’ll end badly for him and the rest of the band, and he should kick her out if he knows what’s good for him…

He is right, as the band members notice the audience response and decide that they want to become vampires too. They one by one talk a reluctant Jennifer into turning them into blood drinkers. With each undead addition the audience reaction grows stronger and stronger. The Winners are becoming rock stars!

Meanwhile Eddie eventually catches up to and convinces the band there is only one way to be free of this curse. Kill the head vampire and the curse will be lifted. But you just know it ain’t gonna be that easy… and you just know Alice is gonna pop back up at some point, too.

Suck is a lot of fun. It’s smartly directly, has a great script, and a really cool rock vibe about it. Rob Stefaniuk did a terrific job balancing the humor and horror elements in Suck. This is only the second feature Rob Stefaniuk has directed, the first being a 2004 comedy called Phil the Alien which he also wrote and starred in. The cast all do a really good job, and Rob seems to have a real handle on the dual chores writing and directing, which I can imagine isn't necessarily an easy thing.

I find the theme of the band becoming undead  in order to bring their career to life interesting. While living the Winners were losers, but in death they found new life. Talk about a rock and roll reincarnation! 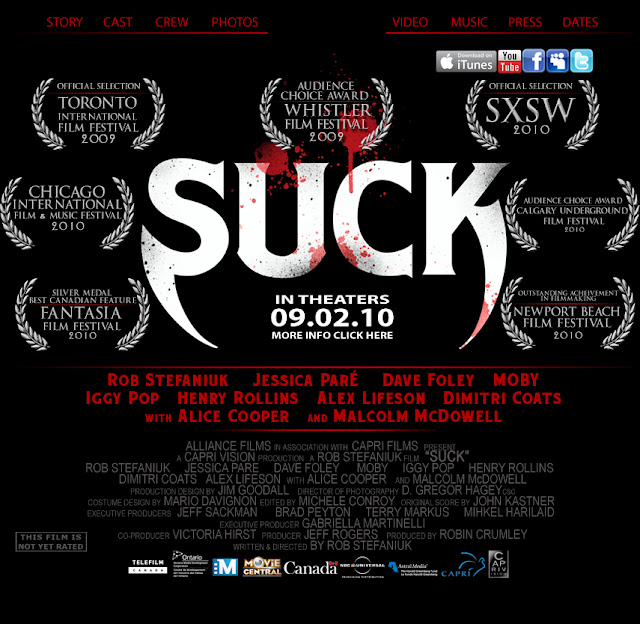 The music The Winners play is really good, but a bit poppy for my taste. Writer/Director Rob Stefaniuk actually wrote and performed a good chunk of the music in this one, including all the songs the band does. There are also tracks by Dmitri Coats' band Burning Brides, David Bowe, Lou Reed, Iggy Pop, The Rolling Stones and of course Alice Cooper.

One of the cooler segments in the film happens in the scene at Queeny’s place where he breaks out into song as the camera whirls about the room and we see Jennifer’s physical reactions to being turned into an undead. This plays out like a music video, rather than a musical, and works really well.

Suck is a smart film full of odes to Rock n' Roll, such as this shot of the band wrapped in the British Flag (The Who - The Kids are Alright) and the shot of the band crossing single file across the street (The Beatles - Abbey Road). 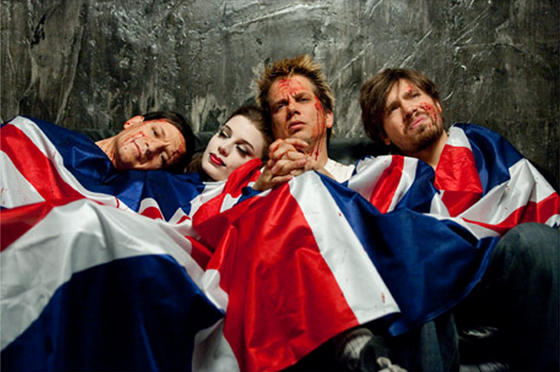 It's obvious Rob is a Rock and Roll fan and this is his love letter to the genre. Suck is a fun movie that never takes itself too seriously – and I think that is the main thing that keeps this from living up to its name. You make a movie called Suck you better darn well make sure it doesn’t – this is definitely a film worth seeing – currently available on Netflix.