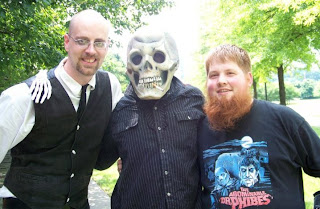 We kicked off the 2010 Go Green With Dr. Gangrene Campaign this weekend with a new series of public service announcements. This will air on the CW58 in all of Middle TN and into Southern KY.

Go Green With Dr. Gangrene is a continuing collaboration between Nashville Horror Host Dr. Gangrene (portrayed by Larry Underwood) and film maker Cameron McCasland. The series has garnered national acclaim with over a dozen awards including a citation from The Governor of Tennessee Phil Bredesen, a special humanitarian award at the Rondo Hatton Classic Horror Awards, and multiple Emmy nominations.

The all new shorts  are entitled “Frank-Can-Stein” , “Watered Down Werewolf”  and “Butthead”  encourage people, as well as skeletons, monsters, and werewolves to recycle aluminum cans, water their pets, and dispose of cigarette butts in proper receptacles. Underwood said of the new spots, "It was my pleasure to again shoot public service announcements using monsters for the greater good. The Go Green campaign has been a huge success and hopefully helped kept people aware of some important issues."

The shorts will be broadcast on WNAB CW 58 out of Nashville and simultaneously screened via www.drgangrene.com and the Dr. Gangrene youtube page. WNAB is the home of Dr. Gangrenes Creature Feature a weekly monster movie show that stars Dr. Gangrene.

The shorts are all filmed in glourious black & white, which director Cameron McCasland stated “We wanted to give the feel of the classic monster movies that both Larry and myself adore so much. In a world of high definition color television, the accolades just goes to show that people still share that affection. “

Larry Underwood is a television horror host who has been haunting the scarewaves of Nashville, TN since 1999. His show has been syndicated around the country.

Cameron McCasland is an Emmy nominated film maker from Edgewood Texas who has called Nashville, TN home since 2001. His work has been seen on MTV, CMT, and film festivals around the globe.