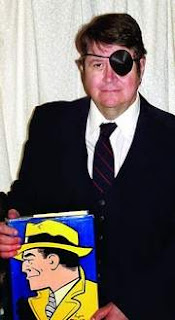 I found out a piece of really cool news recently - Mike Curtis, a.k.a. former TV horror host Count Basil, will be taking over the writing duties for the Dick Tracy comic strip!

If you remember I interviewed Mike for Scary Monsters magazine, and also reprinted the interview here. Mike will be taking over the writing duties in March after longtime writer/cartoonist Dick Locher retires.

Also joining Mike on the Tracy strip is another Tennessean, artist Joe Staton. Curtis and Staton's work will appear in print beginning the week of March 14.

Here's a couple of lines from an article that ran in the Jackson Sun paper:
In December, both men learned they would be taking over "Dick Tracy." Curtis is the strip's writer; Staton will do all the artwork. Colleagues Shelley Pledger and Shane Fisher will do the lettering and inking and Sunday coloring, respectively.


"It was shock and awe," Curtis said. "Dick Locher has won multiple Pulitzer prizes for his editorial cartoons. It's incredible."


Staton was happy and relieved.


You can read the rest of the interview here: