"What Do Cute Versions of Monsters Tell Us About Horror?"

That is a good question, and one that the LOTTD (League of Tana Tea Drinkers - see link in sidebar) folks decided to toss out as a round-robin style post. I initially wasn’t going to write on the topic, as I didn’t think I had much to contribute. But on deeper reflection I rather liked the subject, and decided to go ahead and add my two cents worth. To me, the topici begs one question… 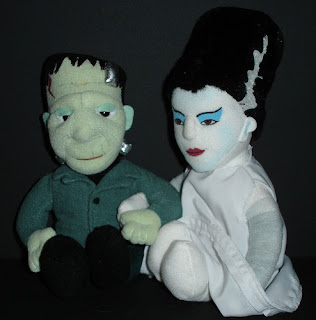 Why cutesy monsters? They’re everywhere, especially around Halloween. You can’t turn around without seeing a cartoon Frankenstein monster or Dracula or any number of other monsters. But why?
In 1931 both of the examples above were legitimately scary films. Audiences were thrilled and horrified, to quote Van Sloan. Over time, however, the monsters in those movies became familiar, and what was once scary lost its edge. The monster rallies of the 40’s needed multiple monsters to provide the thrills of earlier films. Times change, people change, and the things they fear change. Clunky black and white slow-paced movies gave way to Technicolor terrors and splattering horrors. Lumbering monsters and horrors from the deep gave way to fears of nuclear disaster. The ante was constantly raised to keep up with peoples evolving sensibilities. With the passing of each generation the frights of the past became less relevant.

Nostalgia is a funny thing. Folks look back through the haze of time and want to revisit the fond memories of their youth, and also to share these memories with their children. Thus happier, family friendly versions of monsters are born, fit for public consumption and sanitized for your protection. Once scary creatures, no longer scary by modern standards, are embraced as cultural icons. Cute versions of monsters and murderers pop up not so much to celebrate heinous acts of murder but rather to celebrate the joys of the past. Movies are an escape, and people like to revisit their favorite escape from the past. What cute monsters tell us about ourselves is that we as a species are constantly changing, and our idea of what is scary changes along with us.