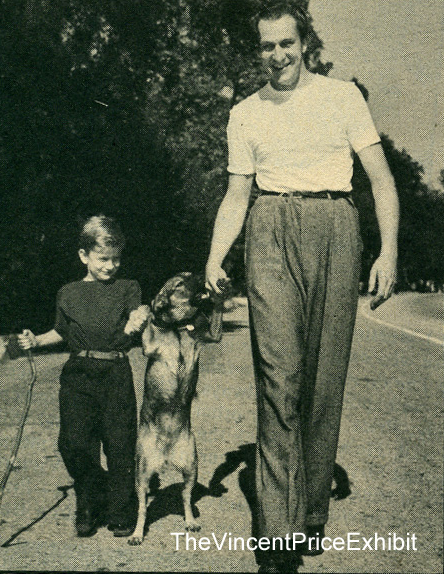 As I mentioned on yesterday's Vincentennial Post, Vincent was an avid pet lover but never, contrary to some reports, owned a pet chimp. He did however own a number of pets, and I contacted my buddy Robert Taylor and asked if he could put together a list of the dogs Vinnie had owned through the years. I knew Vincent once loved a dog so much he wrote a book in loving tribute to him, so thought that hopefully there would be record somewhere of the dogs he'd owned.

Well amazingly Robert came through with flying colors. So here for your enjoyment is an almost complete list of the PETS OF PRICE:


From Robert - This is as close as I can get to a full list of 'em.  I KNOW there were childhood pets, but I can't seem to get those.  But, beginning around '32, when he was in college:

Lisa, a dachshund  (1932...Vinnie had her with him in college)
Albert the Good, a cat (probably around '34...and probably carried back to the States from England)
Johnny, a white English Bulldog with brown patches...(while living in NYC around '35-'37) 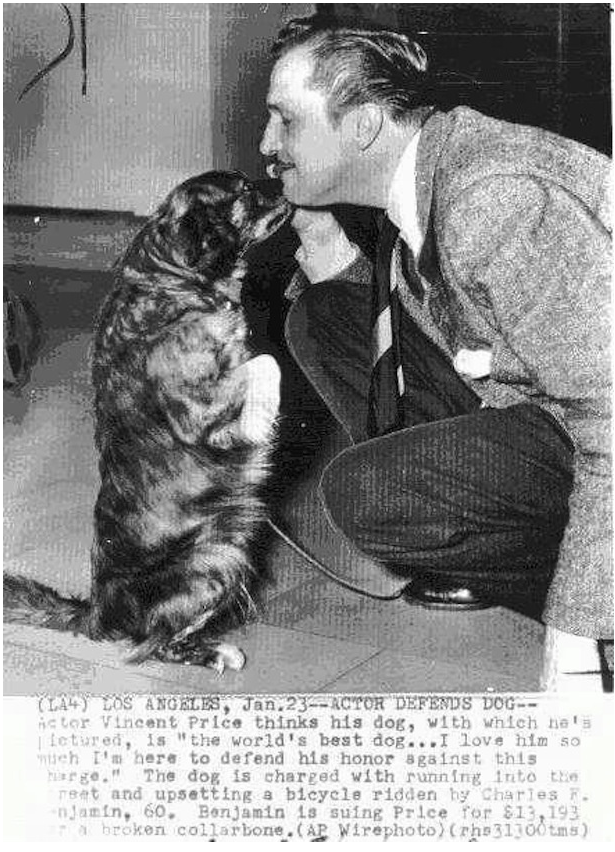 Joe, a mutt "built like a Duncan Phyfe table"...(Joe was born around 1947 and adopted by Vinnie when Vinnie's marriage to Edith Barrett fell apart--Joe died in 1964, aged 17--he was Vinnie's best friend, always--there was a period of time when he was known as P-Joe...you can figure that out by reading the following...)
Prudence, a gray Poodle (when Vinnie married for the 2nd time, his wife Mary Grant Price got Prudence)
and...Prudence had an accident:
well, several of them,
and Mary decided to name them all with a "P":
Paderewski
Pinto
Pansy
Patience
Penelope
Picayune
Percival
(who were all adoped out to various friends)
and....
Pasquale, son of Prudence, who remained with Vinnie and Mary...and so Joe didn't feel left out of the "P"   naming, he was called P-Joe for a while!....
Josephine, a cat (she was technically Mary's)
During their married life, Mary and Vinnie also adopted a turtle/tortoise--and when friends found out, other turtles were brought to them--so they had a whole herd of turtles.
Mary decided to get a coop of pigeons...so they walked around the patio a lot.....
Vinnie rescued a mess of goldfish from a studio film set...and built a goldfish pond in the garden...
Mary & Vinnie decided the house needed birds, so they build an aviary that stretched across TWO ROOMS of the house...
Then, in 1962, daughter Victoria was born....
Paisley, a Skye Terrier (she was technically Victoria's dog)
Puffie, a pug (Vinnie's special little pal for a long time while Victoria was young)
then Vinnie and Mary divorced,
and Vinnie married Coral Browne....
Sam, a Lhasa Apso (Vinnie's dog during the early years of his marriage with Coral)
Tiggy, a Chihuahua (Coral's dog, which she brought to the marriage)
Maile, black Chihuahua (bought for Coral...)
Fendi, longhair brown Chihuahua (friend for Maile)
Wili, full name Wilhelmina, a black Schipperke (Vinnie's dog later in the marriage)
Kiki, another black Schipperke (Vinnie's dog, a friend for Wili)
at Monday, July 11, 2011