At the Paranormal Fest in Murfreesboro TN a few months back I met Blake Powell, the director of the horror host program Midnite Mausoleum (starring Marlena Midnight - see post here) He is a really cool guy, and I enjoyed hanging out with him. Over lunch we talked and compared notes on our shows, and during the course of our conversation he asked me about Oogsley, the hunchbacked lab assistant on my original show, Chiller Cinema. In particular he was curious about the original Oogsley, the one in the first batch of shows.

The topic also came recently in a podcast interview I did with a guy named James Downing (Monsters from the basement – see article). There have been quite a few recurring characters through the years, so I thought I’d take a minute and recognize the ones that have popped up on both shows, Chiller Cinema and Creature Feature, over the years…

Oogsley #1 – The first recurring character on Chiller Cinema was Oogsley, the hunchback lab assistant. The original Oogsley bore a striking resemblance to the Doc Gangrene physique-wise, leading many viewers to (correctly) guess that perhaps both characters were played by the same actor.  I originally thought it would be funny to have both played by the same person, with the audience in on the joke - and it was for a while, but eventually I thought it would be better to have an Oogsley that I could interact with. 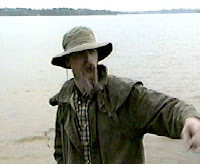 Major Monterey Jack - Monster hunter and bumbling idiot, Major Monterey each week took viewers on a (mostly) unsuccessful hunt for a different monster on Shackle Island. Major Monterey was also played by me.
Barnaby Bones – Barnaby Bones was a wisecracking skull in a cage that resided in the Gangrene laboratories. He was a constant source of irritation with his sarcasm and never ending stream of bad jokes. 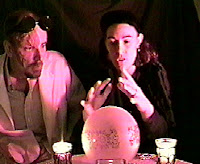 Madam Fortune – Mystic and fortune teller Madame Fortune made several appearances on Chiller Cinema in the early days. She was usually consulted when an unexplained paranormal event occurred or when someone needed their fortune told. Madame Fortune was played by my wife, Karlee.

Oogsley # 2 – The second Oogsley came on the scene at the end of season one. Dimwitted and clumsy, he never ceased to frustrate Doc Gangrene. Oogsley eventually disappeared one day while hunting for crickets in the catacombs and never returned. Oogsley #2 was played by Brandon Lunday.
Icky the Putrid Postman – Icky was the ill tempered mail clerk on Shackle Island. One day he lost a mail delivery to a gypsy and gave her the cold shoulder about it – afterwards she cursed him to forever deliver mail to the dead. Icky bears an uncanny resemblance to Oogsley 2…Icky was also played by Brandon Lunday.

Nurse Deadbody – The sexy Nurse Deadbody came onto the scene for a season on Shackle Island and brought a bit of sanity, along with heaps of sarcasm, to the lab. She was played by my wife, Karlee. She eventually left to take a better job at a medical facility on the other side of the island.

Nurse Moan-eek – In season 5 the bubbly Nurse Moan-eek took a position in the Gangrene Laboratories. The Doc’s late Uncle Mortimer lost his entire fortune in the great pumpkin famine, and all he had left to will to his nephew was his faithful Nurse, Moan-eek. Gangrene always suspected Mortimer secretly hated him, as Moan-eek’s help was often less than helpful. Moan-eek was played by Linda Wylie.

Otto Von Lump – Ordered from a Mad Scientists magazine, Lump took employment on Shackle Island for a season. He was a dimwitted assistant (is there any other kind?) with a hunch back and large scar down his face. Otto was played by Paul Browning.


Gibson the Undead Rocker – This rocker’s tour bus crashed just outside the Gangrene estate and Gibson found himself not dead yet not quite alive. He took up residence in Gangrene Manor and he would jam with Gangrene, often working up songs based around that evening’s movie. Gibson was played by John Hudson.
at Wednesday, February 16, 2011