Last night THE WALKING DEAD season 7 premiered to what will surely be record viewing numbers. Season 6 left us with a cliff-hanger that promised the brutal death of a Walking Dead cast member - an event that was taken straight from the pages of the comic it is based on. This death came at the hands of the show's latest villain, Negan (Jeffrey Dean Morgan, a character that is once again taken from the comic). Many Walking Dead fans complained about the season 6 finale, and the fact they had to wait the entire summer to find out who gets killed. Many even boasted that they would never watch another episode (although I bet almost every one of them was glued to their sets when it aired at 8pm central last night). 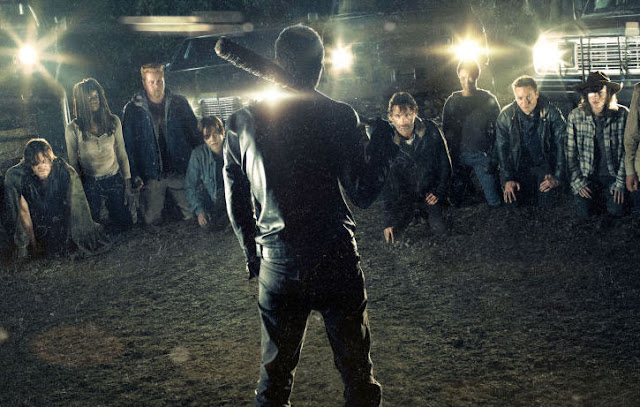 This season's episode picked up right where last year's left off and although the event deviated somewhat from the comic (I won't go into details here because this blog, and my own personal philosophy, is 100% spoiler-free) it still delivered and was a fantastic piece of TV drama. I have to admit I have not read the comic, and actually think that probably works in my favor as I approach each episode fresh, able to enjoy it without comparing and contrasting it to the source material. 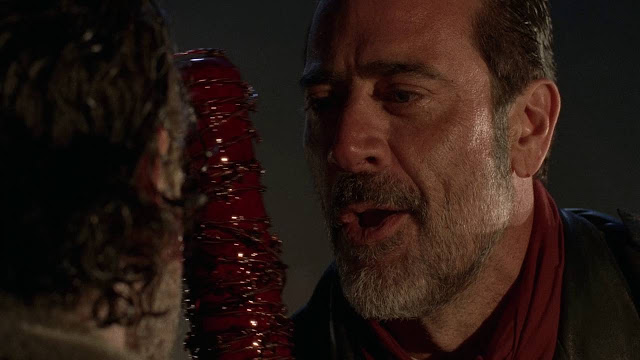 Once again, however, the complainers have come out of the woodwork, and I have to say this has gotten completely out of hand. Social media was immediately inundated with people spouting off about how upset they were at the episode, how they would never watch another episode, how the show was ruined, etc., etc. Enough already.

Even my own home town of Nashville's beloved alt-newspaper THE NASHVILLE SCENE joined in, as they unveiled a fluff piece online this afternoon by a writer named Amanda Haggard entitled "Dear THE WALKING DEAD, I'm Over You." In this article she gripes about how much she disliked the premiere and ends with the line: "TWD, I’m over you."

WHO CARES? It's complaining, and nothing more. The opinion of one person who, by her own admission, the show probably isn't for. No kidding! So stop watching already, end of story. I have to ask, why in the hell did The Scene bother to run this piece? Seriously, not a good look, Scene.

The truth of the matter is that last night's episode was full of drama, tension, fantastic special effects and delivered an event that will have repercussions for the characters the remainder of the show's run. But then, that's just my opinion.

Was it for everyone? Of course not. Nothing is. There are plenty of shows that I don't bother to watch because I know they aren't the sort of show I like. But then, I don't waste my time complaining about them, either. Unlike some members of the press, I have better things to write about.
at Monday, October 24, 2016