The fear of the year is here!


I was recently invited by my buddy Rod Barnett to appear as a guest on his podcast THE BLOODY PIT. He didn’t have any specific topic in mind, and asked me if I had any particular film that I was interested in discussing. 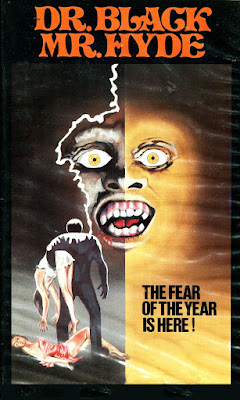 Last summer I was a guest at the LONE WOLF FULL MOON TATTOO SHOW, and while there I ran across a tattoo vendor selling VHS tapes. I immediately scooped up a handful of them, and among the ones I grabbed was a big box clamshell of DR. BLACK/MR. HYDE. I had never seen this one before, so my son Luke and I watched it a couple of days later and loved it! I suggested this movie to Rod, who had never seen it before either, and he enthusiastically agreed.


Dr. Black, Mr. Hyde is a 1976 blaxploitation horror film loosely inspired by the novella, The Strange Case of Dr Jekyll and Mr Hyde by Robert Louis Stevenson. It is directed by William Crain, the man who also directed perhaps the best known blacksploitation movie of all time, BLACULA.


It stars Bernie Casey as Dr. Henry Pride, a man who, along with his research partner Dr. Worth (Rosalind Cash) is working on a cure for cirrhosis of the liver. Impatient to test on human subjects, Pride injects himself with the serum. However, it turns out his formula has certain side effects, as one can guess from the title of the movie. In this case it turns Pride into an angry white-skinned monster that sets out on a killing rampage, leaving a trail of dead pimps and hookers in the community.


It’s easy to dismiss a film like Dr. Black/Mr. Hyde as cheap exploitation trash, but this movie actually has a lot going for it. There are some serious themes woven throughout the ridiculous sci-fi plot, in particular addressing issues of race and class struggles, as well as medical ethicalities. It is a fun movie, and one I recommend. Watch for the podcast coming soon (I'll provide links here) where Rod and I delve deep into this film and uncover a lot of details about this movie and interesting tie-ins to other Hollywood films and actors.


In the meantime, here’s the trailer for Dr. Black/Mr. Hyde, one of the greatest trailers ever!

And you can watch the entire film on YouTube HERE
at Friday, October 14, 2016