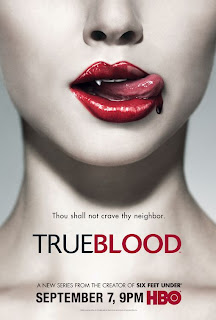 I've watched every episode of the new HBO series True Blood that has aired so far, and I have to say I am hooked. It is a really clever series that stars Anna Paquin as Sookie Stackhouse, a waitress who gets caught up in a love affair with a vampire named Bill Compton, played by Stephen Moyer. The series is based on a series of books called The Southern Vampire Mysteries, by Charlaine Harris .

It is a fresh take on the vampire mythos, and has featured several twists and turns I didn't see coming. I love the flashbacks to the past history of vampire Bill, especially the Civil War flashbacks. This series is spearheaded by Alan Ball, the guy who brought us Six Feet Under. It feels kind of like a cross between that show and Carnivale, with a hint of cajun Louisiana undead spice thrown in for good measure. 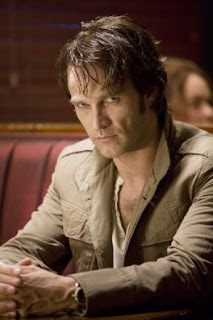 My only regret - we're already on episode 9 of the first season of 12. It'll be over soon and we'll have to wait till next year for more new episodes!!
at Tuesday, November 04, 2008