Dark Shadows, The Night Stalker and Other Productions 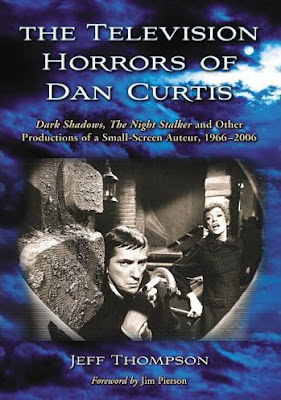 I ran into my good buddy Jeff Thompson the other day at the PLANET OF THE APES screening at the Belcourt Theater. As I entered the theater I recognized a familiar face, so I went over and sat with Jeff. Before the film started we had a chance to chat and catch up a bit, and Jeff told me about an exciting new book he has coming out through McFarland Publications. It's called Dark Shadows, The Night Stalker and Other Productions, 1966–2006. Here is the McFarland website description:

The award-winning and innovative director Dan Curtis was known for helming epic war movies, but before that he darkened the small screen with the horror genre’s most famous soap opera. Curtis directed the groundbreaking daytime television serial Dark Shadows from 1966 to 1971 and then turned his lens to numerous made-for-TV horror movies. This book examines 16 horror films that Curtis produced, co-wrote, or directed, as well as the cultural impact of Dark Shadows and its various incarnations. The book features 69 photographs and a foreword by Jim Pierson of Dan Curtis Productions.

According to Jeff the 69 photographs are rare and some never before published photos of Dan Curtis. Jeff is a lifelong Dark Shadows aficionado. I've been to his house and it is a veritable museum of Dark Shadows and other fantastic memorabilia. (Tennessee Crossroads did a segment for a Halloween episode there, focusing on Jeff's enormous collection of memorabilia).

Jeff is an English professor at Tennessee State University and incorporates his love of horror films into his courses, even screen various movies for his students. He has written articles on Dan Curtis and Dark Shadows and attends conventions as a guest on Dark Shadows and horror cinema.

His new book will be available starting Friday, March 13th on the McFarland website,

and you can also order it through Amazon.com.
at Thursday, February 19, 2009