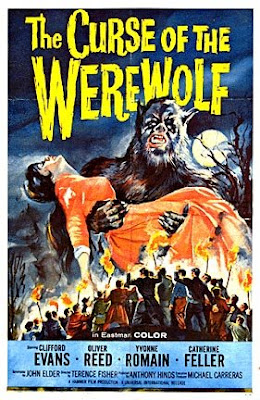 I recently watched the 1961 Hammer film CURSE OF THE WEREWOLF with my youngest son, Luke, and we had a good time with it. I've always liked this movie, and since Luke is such a fan of the Universal Wolfman movie, I figured he'd enjoy this movie, too, and I was right. He thought it was pretty good and that the werewolf looked "cool".

I had never really paid attention to the opening credits, but this time one particular credit caught my eye…”Based on the novel THE WEREWOLF OF PARIS by Guy Endore”. 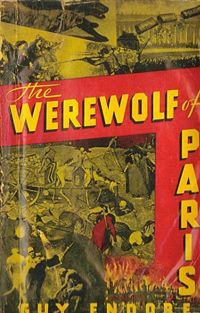 Interesting! I was curious how close to the source material the movie was, so I tracked down a copy at the Nashville Public Library. After a little investigation it turns out Endore also wrote the screenplays for MARK OF THE VAMPIRE, MAD LOVE, and THE DEVIL DOLL. I am a big fan of MAD LOVE, which stars Peter Lorre, so I became that much more anxious to read this novel.

The Werewolf of Paris was written in 1933, and tells the tragic story of Bertrand Caillet, who was born with the curse of lycanthropy. His werewolfism is the culmination of a variety of events... His mother was raped by a priest who came from a twisted family with a tainted bloodline (brought on by decades of decadent and immoral behavior). Bertrand was born on Christmas Day, at the hour of Christ’s birth. He was a blasphemy and born with this dread curse. Tragedy, if not death, eventually befall all who come in contact with Bertrand.

The Hammer film actually follows the source material fairly faithfully, at first, but leaves out many details, and alters several others. The ending definitely strays from the book, but the bare bones of the story are taken directly from Endore's novel. I have to say in my mind's eye Bertrand (in the book) looked exactly like Oliver Reed. 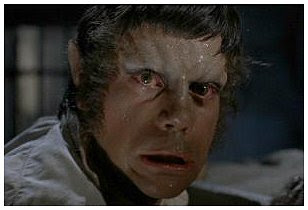 It's a good book and at times I couldn't believe it was penned in 1933. Compared to the cinema of the day, it is much more shocking, with equal amounts of sex, violence and gore to go around.

The following is a quick excerpt from a scene where Bertrand, under the spell of lycanthropy, attacks and murders his childhood friend…

"Though a moment before Bertrand's hands had itched to be at the man's throat, they made no move to seize and hold his prey. The tension was not in his limbs but in his face, in the masseter muscles of his jaws. His mouth had opened wide. His teeth had dug through cloth and flesh. His face was inundated with a warm fountain, which he licked at greedily..."

Endore explores both the disease of werewolfism and the conflicted nature of poor Bertrand, who fights a losing battle against his malady. It is as much of a social commentary on the wolves of society and man's violent nature as it is a story about the mystical monster, all set within the backdrop of a war entrenched France. For anyone who enjoys classic horror literature, this is one not to be overlooked.

Here's the trailer for CURSE OF THE WEREWOLF:

Email ThisBlogThis!Share to TwitterShare to FacebookShare to Pinterest
Labels: curse of the werewolf, dr gangrene, Oliver reed, the werewolf of paris