Wanted to share a couple of cool Bela Lugosi pics today. The first is a pic of Bela in full Dracula regalia. Nothing goes better with Halloween than Bela Lugosi Dracula! 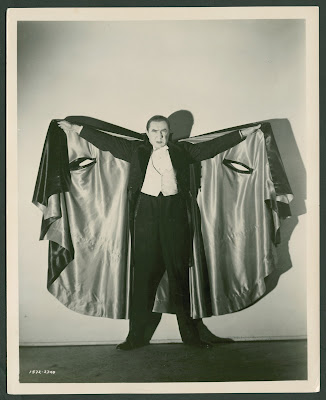 Next up is an oil painting of Lugosi that was owned by Bela himself. This sold for over 86 thousand dollars at Heritage auctions back in 2004! Here is the description of this painting - pretty amazing... 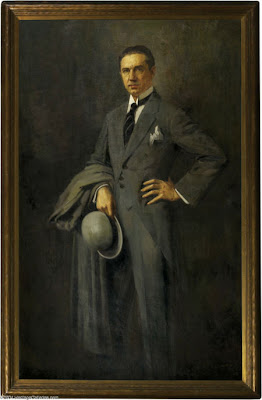 This stunning, large and famous portrait of the legendary Bela Lugosi stands as a lasting tribute to a great actor. Apparently painted in the early 1930s at the height of Lugosi's fame (he became a household name in 1931 with the premiere of Universal's Dracula, directed by Tod Browning), Kende's work reveals an urbane, debonair Lugosi at the peak of his creative powers; bold and confident, yet utterly charming.
The artist was a Hungarian immigrant, like Lugosi, and became an important painter of portraits and landscapes. Born in 1889, Kende studied at the Nati Academy of Art in Budapest, as well as in Italy and France before settling in Los Angeles in 1932, where he would live until his death in 1952. It was undoubtedly the Hungarian connection that drew these two talented artists together, an alliance that produced the great work offered here.
Kende has captured the essence of Lugosi, Hollywood's "Master of the Macabre", in this wonderful portrait, particularly the penetrating, almost hypnotic, quality of the actor's eyes. Slim and handsome -- the epitome of the iconic leading man -- was the way Bela longed to be seen by Hollywood, which insisted on casting him as one monster/mad scientist after another, and by his fans, who, for many years, saw him as only Dracula.
This portrait hung in a place of honor in Lugosi's home for many years, until his death; Arthur Lennig, in his definitive Lugosi biography, The Immortal Count, shows the actor with this painting at two very different times of his life, and says, "Before the unchanging portrait on the wall, the actor - unlike Dorian Gray - aged." On the back of the canvas Bela Lugosi has signed his name in pencil with an illegible inscription above the signature.
This painting, which is offered in its original frame, has had some expert conservation work performed upon it, and is beautifully preserved. It will make a marvelous centerpiece to any film aficionado's collection.
(Note: Also offered with this painting is the original funeral plaque, which was displayed at Lugosi's funeral. The painted crescent board measures 18" X 12", with "In Loving Memory Bela Lugosi 1882-1956" is painted on it. The board is in very nice condition with some chipping in the upper right corner.)
at Friday, October 29, 2010