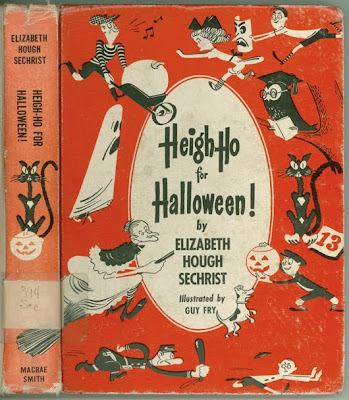 I went to a fall festival at my son’s school last weekend. It was a wonderful warm fall day and we had a great time. They had game booths set up, kids inflatable jump stations, vender’s booths, and prizes and candy for the kids. It was all a fundraiser for his school, and overall a pretty successful event, I think.
One of the other events they had there was a book sale. They were apparently selling books that had been donated by a local library, because they had thousands of old books lined up on tables in the gymnasium. I walked over and immediately stumbled onto the little gem below…
It is a kid’s Halloween book from 1948 called Heigh-Ho for Halloween. It features Halloween stories, poems, plays, games and party ideas. It also has an interesting little section at the end of the book called “Halloween Today, The Community’s Responsibility” that is an interesting insight into the holiday of Halloween in 1948. It basically is about how the activities of pranksters had gotten out of hand and that something had to be done or else Halloween was in danger of abolishment for acts of lawlessness that occur during “mischief night.”
Neat little book that I did not expect to stumble upon! I found it in the first box I looked in, and despite scouring the place I was unable to find anything else of interest. But I’m glad I found this one. Heigh-Ho for Halloween indeed!! 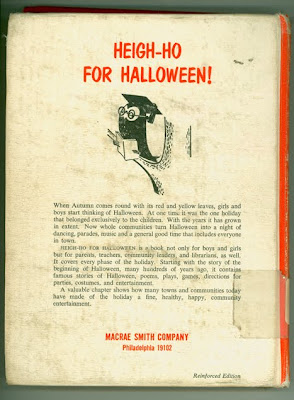