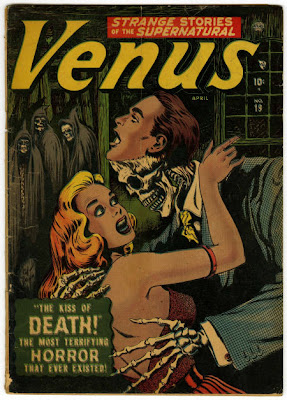 Here's an old pre-code horror comic I ran across lately. Man they knew how to make covers back then! Just look at how lurid that thing is - I DEFINITELY would have bought this comic - hell, I still would! Awesome! This is the final issue of this series, (dated April 1, 1952), which started out as a romance book but shifted gears later on, no doubt to capitalize on the EC comics horror craze. The comics code was adopted in 1954, but no doubt the publisher could have already been feeling the heat by April 52. Damn you to hell, Frederick Wertham!
at Tuesday, October 12, 2010