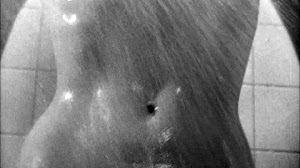 Marli Renfro Peterson, known as "The Girl In Hitchcock's Shower" has agreed to appear at our October 24 screening of Psycho. Ms. Peterson, as Marli Renfro, was a model who was hired by Universal to do be Janet Leigh's body double for the nude shots in the infamous shower sequence. She will be available to answer questions and to sign autographed copies of the book, The Girl in Hitchcock's Shower.

Thanks to Universal, our raffle this month will include the chance to win a copy of the 50th Anniversary Blu-Ray DVD of Psycho. We'll also be giving a DVD to the best costume.
Prices: Adults $5.00

We'll have popcorn, sodas, and candy available. Food and "adult" beverages will be available at Drink (direct entrance from the theater lobby). Food and beverages purchased at Drink may be brought into the theater!Online Ticket sales. Tickets purchased online include a $1 per ticket convenience fee. All tickets will be available at will-call on the day of the screening. Online sales will cease as of 10/22/2010: